Daddy Long Legs – Welcome This Spider into Your Home! 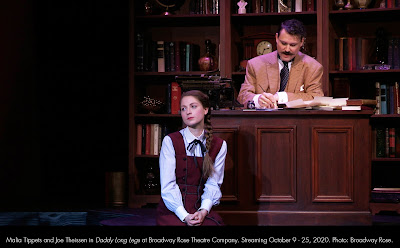 We’ve all missed live theater – but I didn’t realize just how much until last Saturday morning, when I started watching Broadway Rose’s beautiful, witty, and utterly charming video production of Paul Gordon and John Caird’s 2009 musical version of Daddy Longlegs. OK – still not live theater seen in person (with the exception of a small, presumably well-distanced audience) but SO much closer than any of the (impressively creative) Zoom productions I have seen since last March when the world of live theater collapsed around us. The unsinkable folks at Broadway Rose achieved their miracle by (1) finding a play that only requires two cast members, and (2) finding, within their amazing talent base, two performers ideally suited for these roles and who already live in the same Covid-19 bubble, eliminating the need for on-stage masks. With those elements in place, and the New Stage as an ideal venue, the work began – sets, costumes, music, lighting (oh, the lighting!), direction – plus one additional element: a team of skilled videographers to pull of a multi-camera shoot of the live performance. The end result is a production that comes close enough to the experience of live theater that, by intermission, I was feeling positively euphoric – and the warm fuzzies didn’t fade…

The musical is based on the 1912 novel by Jean Webster. Set in turn-of-the-century New England, it tells the story of Jerusha Abbott, “the oldest orphan in the John Grier Home.” A mysterious benefactor, trustee Jervis Pendleton, agrees to send her to college under the condition that she write him a letter once a month - but she is never to thank him, and never to expect a response. Through this correspondence, she shares her experiences of discovering literature, adventure, freedom, self-esteem, and love. Not knowing her patron's name, she dubs him "Daddy Long Legs." There is a touch of Annie, with a wealthy benefactor who normally prefers boy orphans but finds himself enchanted by this one girl, and an enormous helping of Little Shop Around the Corner/She Loves Me/You’ve Got Mail in this play that revolves around letter-writing and concealed identities – but to be fair, the original 1912 novel precedes any of these more recent classics.

Broadway Rose mainstays Malia Tippets and Joe Thiessen, a real-life couple (in fact, she proposed and they were wed on-set during tech week!), play Jerusha and Jervis with a deft touch, bringing lots of humor to the irony of Jerusha’s misperceptions about her benefactor and to Jervis’ jealousy as he reluctantly, then eagerly, falls head over heels in love despite his intent to remain a confirmed bachelor. The show is essentially an operetta, with limited dialogue interspersed among almost non-stop vocals. Tippets’ broad range is tested by countless solos and harmonies requiring solid soprano chops and immunity to vocal fatigue, and she handles the challenge with aplomb. Thiessen’s smooth baritone provides a perfect compliment – strong in his solo numbers, and the two voices blend beautifully in some complex duets. However, it is the acting that really sells the show – especially their body language as a raised eyebrow, toss of the head, longing gaze or dismissive glance tells the story of the couple’s developing relationship. Tippets’ combination of naivety, intellect, and independence is charming, and her explanation of Fabian Socialism may be my favorite moment in the whole show!

Neither the individual songs nor the melodies are terribly distinctive, but as befits an operetta they move the story along nicely. However, Jeffrey Childs’ music direction is flawless, and complements director Sharon Maroney’s careful timing and pacing. Sean O’Skea’s set design is simple but effective – a couple of chests and a bed create Jerusha’s bare-bones environment, while the more complex and detailed desk and bookcase give the right touch of opulence to Jervis’ world. Phil McBeth’s lighting design adds immeasurably, taking full advantage of the New Stage’s rich array of lighting options and creating a series of sometimes grim, sometimes idyllic scenes.

I urge you to give Daddy Long Legs a try – the price is minimal (only $25 for 48 hours of unlimited viewing) and, since the show can be shared with everyone in your particular bubble, a great bargain. My only regret is that the production has rekindled a longing for local theater – I hope that Broadway Rose and other local companies are able to bring more of this kind of entertainment to Portland-area audiences until we can all get together again, both on-stage and off.

Broadway Rose’s Daddy Long Legs is available for streaming through Saturday, October 25th. For more information visit www.broadwayrose.org or call 503.620.5262.
Posted by Westside Theatre Reviews at 7:05 AM No comments: