A Christmas Carol at Broadway Rose – Not the Usual Fare 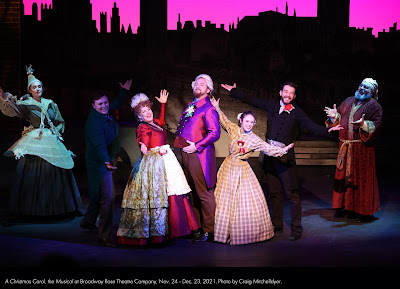 I was shocked to read in the Director’s Notes that Dan Murphy, co-director (with Annie Kaiser) of A Christmas Carol – The Musical at Broadway Rose, had never watched the show on stage, read the novella, or even seen the cartoon. On reflection, however, it makes sense – some elements of this musical depart sharply from Dickensian canon, and may be best addressed with a fresh eye. Perhaps no one raised on visions of Ebenezer Scrooge as Alastair Sim, Patrick Stewart, or Mr. Magoo would ever have cast the swarthy, hulking, full-voiced Paul Cosca in the lead role – but it works beautifully, and this casting anchors a uniquely entertaining and comic vision of the quintessential holiday classic.

Alan Menken, Lynn Ahrens, and Mike Ockrent teamed up to create a new version of A Christmas Carol, staged annually at the Paramount Theatre in Madison Square Garden from 1994 through 2003, and released as a Hallmark television film in 2004.  Menken and Ahrens’ 16 songs keep the show bright and lively, and showcase abundant powerful ensemble work as well as some stunning solo voices. The Broadway Rose production features a stripped-down cast (only eight actors), appropriate to the smaller stage and pandemic limitations, but most actors play numerous roles so all of the key characters (Scrooge, Tiny Tim, Bob Cratchit, the Ghosts, etc.) are fully represented.

The surprise standout in the cast is Broadway Rose newcomer Victoria Spelman, whose recent time at the Dell’arte School of Physical Theatre paid off in spades. She is hilariously snarky in a brief bit as Scrooge’s housekeeper, but it’s her portrayal of the Ghost of Christmas Past that moves her into the stratosphere. The combination of her costume, gorgeous voice, and comedic flair evoke a vision of Julie Andrews playing the world’s tallest Munchkin. When she is partnered with choreographer Robert Head, who plays Fred, Young Ebenezer, and a host of other roles, the duo find perfect harmony as vocalists and dancers, bringing the show some of its most captivating moments.

William Shindler is another unexpected delight as both Marley and the Ghost of Christmas Present – the script allows for a lighthearted approach, and Shindler takes full advantage. Broadway Rose newcomer Valentina Silva’s petite frame allows her to believably play both adult and child roles, while making full use of her clear and rich soprano range. Speaking of petite – young Francesco Germano’s stage presence in his acting debut as Tiny Tim (and others) is unforgettable – when he’s on stage, it’s hard to see anyone else. However, it’s never possible to entirely overlook Cosca’s Scrooge. Despite his substantial frame, he manages to shrink and grow as the moment requires, and his big-voiced “Nothing To Do With Me” sets the stage perfectly for what will follow.

Robert Vaughn’s scenic design, an elaborate London backdrop, creates just the right mood while allowing for nearly instantaneous changes of scenery, a feat somehow matched by costume designer Sydney Dufka. The costumes are elaborate and frequently whimsical, and the eight cast members are able to change clothes (and roles) in the time it takes for a single actor to walk across the stage. Music Director/Conductor Darcy White performs the double miracle of turning eight vocalists into a massive ensemble while four musicians become an orchestra.

No matter how many versions of A Christmas Carol you may have seen, do not miss this fresh and funny take – it’s the perfect way to kick off the most wonderful time of the year!

Posted by Westside Theatre Reviews at 6:02 PM No comments:

The Chinese Lady Comes to Portland for Tea and More

Among the many reasons to love the gradual resurgence of live theater this fall, perhaps the best is the focus on smaller-cast, lesser-known works that might have been overlooked in a sea of better-known audience magnets. Nowhere is this principle illustrated more elegantly than in Artists Repertory Theatre’s current production of Lloyd Suh’s The Chinese Lady.  Director Lava Alapai’s deft touch and her superb two-person cast deliver a 75-minute ride of gentle comedy and bitingly current cultural commentary that leaves the audience thoroughly entertained, edified, and shaken by closing curtain.

The play, which is based on a true story, tells the tale of Afong Moy, allegedly the first Chinese woman to set foot on U.S. soil. In 1834, at the age of fourteen, she was sent by her family to some importers of exotic goods in the United States, where she was put on display as a curiosity for white people. What was to have been a two-year commitment turns into nearly five decades of “performing” by sitting in a stylized “Chinese” room while demonstrating how she eats, what she wears, and (as each show’s grand finale) how she walks with her tiny bound feet. She initially speaks no English, and is accompanied throughout by her translator, Atung, whom she jokingly describes as irrelevant although he is her only conduit between Chinese and American culture and language. After several decades possession is transferred to P. T. Barnum as a sideshow, but her allure lessens as she ages, and when she is 62 Barnum imports another young Chinese girl in her place. Afong’s original goal was to foster understanding between two very different cultures, but she gradually realizes that she is just being used as a tool of imperialist exploitation – in one particularly telling sequence, she dispassionately describes the process of foot-binding, declaring that she does not believe it is a terrible custom – then adds her zinger: that some Western traditions, such as corsets and the trans-Atlantic slave trade, are at least as barbaric.

Barbie Wu’s “Afong” is nothing short of phenomenal – alternately innocent, sly, witty, and ultimately enraged as the decades wear on, Afong learns about the brutal treatment of Asians in America, and comes to understand the role she plays. With only subtle changes in her hair and clothing, she uses her voice and body to transform herself from early adolescence to old age. Some of Wu’s best moments are those with Bern Tan (“Atung”).  Most of their interactions are indirect, and often involve only body language – rolling eyes, a toss of the head or a sarcastic smile that conveys worlds about the strange relationship between the pair. Tan is particularly funny in the scene where he portrays both himself and Andrew Jackson, as he switches from his own carefully modulated voice and restrained body to Jackson’s loud and obscenely vulgar persona.

Given the recent resurgence of anti-Asian sentiment around the United States, the time could not be better for this evocative exploration of our nation’s ongoing, troubled relationship with Asian immigrants.  From set to costumes to lighting, The Chinese Lady is a physically gorgeous show that will not leave its audience unchanged.

HART Explores Crimes of the Heart

If there is one overarching theme that defines theatrical depictions of the American South, it is that family trumps all.  Playwright Beth Henley’s Pulitzer Prize winning Crimes of the Heart clearly adheres to this principle in its curious mixture of comedy and tragedy, of startling transgressions and stereotypical Southern schlock. Director Stan Yeend has assembled an appropriately quirky group of actors to bring this unusual blend to Hillsboro’s HART Theatre’s production of a classic play.

Crimes of the Heart introduces the Magrath sisters (Lennie, Meg, and Babe), the most recent generation of a hopelessly dysfunctional family in Hazlewood, Mississippi. Henley tackles it all – racism, spousal and child abuse, suicide, infidelity, mental illness, and more as her script takes the audience back and forth from laughter to tears through three acts of emotional peaks and valleys that end with the ubiquitous sisterly hug – more catharsis than resolution.

The story is centered on a very, very bad day and a single (literal) crime –Babe, the youngest sister, is being released from jail after shooting her husband, Zachery Botrelle, in the stomach because she doesn’t “like the way he looks.”  The scene opens with a desperately lonely Lenny, the oldest sister, celebrating her 30th birthday alone by trying to light a candle and stick it in a cookie (this does not go well).  Lenny’s pathetic birthday celebration is minimally brightened by the delivery of two presents – a bag of pecans from Doc, Meg’s ex-beau, and a box of Whitman chocolates from the Magrath girls’ cousin Chick, the quintessential small-town snob.  Chick, utterly mortified about the stain Babe has left on what’s left of the family honor, is headed for jail to pick up her errant cousin. The incredibly self-centered middle sister Meg, having gotten word from Lenny of Babe’s predicament, breezes into Hazlehurst from Hollywood, where she has achieved solid failure as a singing star and been briefly hospitalized for depression. The fun never stops – and it’s a tribute to playwright, director, and actors that the audience is able to empathize, but still see the lighter side of all this tragedy.

Tyler Hulegaard brings a puppy-dog like naiveté to his small role as Babe’s young, inexperienced (and clearly smitten) lawyer, but his finest moment is a phone conversation where he seems to grow 6” and his voice drops an octave as he tries to intimidate Babe’s wounded spouse.  Blaine Vincent III drips with Southern charm that makes it hard to read his true feelings as Doc Porter, still carrying a small torch for Meg but thoroughly settled in with a wife and family. Deone Jennings is consistently funny, if occasionally a bit over-the-top, as stick-up-her-butt Chick – she provides a lot of the show’s much-needed comic relief.

The real heart of the show, of course, is the Magrath sisters.  Leslie Inmon’s “Lenny” provides the lion’s share of the tears (her own, and the audience’s) – her vast range as an actor allows her to mourn, rage, accept, and even find joy, hope, and love in a world that has offered up entirely too much pain. Yelena King’s “Meg” is nearly impossible to love, and King gives her character a chillingly strident narcissism that hides occasional glimpses of the wounded bird beneath her armor. Kelsey Ion’s performance, like her character, is genuinely bipolar – she brilliantly navigates Babe’s dizzying mood swings as she shifts between a delusional, childlike simplicity and genuine empathy.

Several years ago, Woody Woodbury designed a beautiful set for the Mask & Mirror production of Crimes of the Heart, and he has definitely matched this earlier effort again at HART.  Before we know anything about the Magrath sisters, the detailed and authentic kitchen set tells a story of a modest, but much-loved home held for generations and built at a time when the kitchen was truly the center of the home and family.  The set dressing by Kathryn Stevens and Virginia Kincaid provides a perfect complement, with a careful eye in all its touches.

With three acts, Crimes of the Heart is a relatively long show (almost 2½ hours the night I saw it) despite solid pacing and no set changes.  However, it’s definitely worth seeing, both for the quality of the performances and to support HART’s willingness to participate in the renaissance of live theater.

Crimes of the Heart is playing at the HART Theatre, 185 SE Washington, Hillsboro through Sunday, November 7th, with performances Friday and Saturday at 7:30 p.m. and Sunday at 2:00 p.m.

Posted by Westside Theatre Reviews at 5:55 PM No comments: