Theatre in the Grove’s C.A.S.T. Plays A Fine Fiddler, Jr. 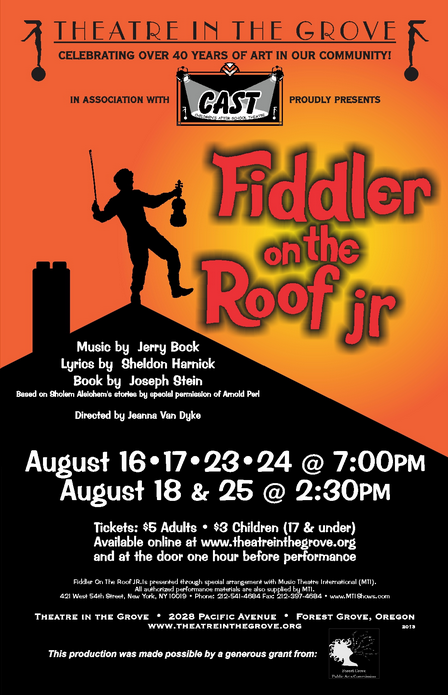 By Tina Arth and Darrell Baker
Fiddler on the Roof is one of our favorite musicals (Darrell has cast recording in eight different languages!), and we were a little nervous about how such a dense and sophisticated show would translate to the conventions of the “Jr.” format, usually reserved for shows with a very young cast and aimed at an equally young audience. However, Theatre in the Grove’s C.A.S.T. (Children’s After School Theatre) production proves our fears unfounded. The teen ensemble, directed by Jeanna Van Dyke and vocal director Ashleigh Zijdemans, captures the spirit and emotional impact of the original story, and the cleverly edited script retains all of the show’s powerful themes and characters.


In less than ninety minutes, Fiddler, Jr. deals with prejudice, religious freedom, women’s rights, love, class warfare, the tension between tradition and progress – all topics as current today as they were when the Harnick and Bock show made its Broadway debut in 1964. Set in the tiny Russian village of Anatevka in 1905, the story revolves around Tevye, a poor Jewish milkman, his wife Golde, and their five daughters.  By the closing number, the Jewish villagers have been driven out by the Cossacks, three of Tevye’s daughters have picked their own spouses without the assistance of matchmaker Yente, and the remaining family members are headed off to America to live with an unsuspecting uncle.


Jer Stephens (Tevye) provides a firm anchor for the show, acting as both lead and Greek chorus as he navigates and narrates the key moments. He brings a mature dramatic sensibility, comedic precision, and a solid singing voice to the role. The relationship between Stephens and Mikayla Wallace (Golde) works beautifully - while she is technically subservient to her husband, Golde tries to rule the family with an iron hand, but is constantly undercut by her husband’s romanticism and indecision. Mikayla’s lovely voice adds a lot, especially in the touching “Do You Love Me?”

The three oldest daughters (Crystal White as Tzeitel, Brea Grimes as Hodel, and Brenna Fitzgearld as Chava) provide charming solo voices and harmonies, and they do a great job of conveying their growing resistance to traditional notions of arranged marriage. Among the rest  of the cast, Jack Thias (Motel the Tailor) particularly shines – he is poignant and believable as Tzeitel’s timid suitor, emboldened by love.


Unlike many productions we have seen, this cast has a real Fiddler (Adam Borrego), and he is both a good musician and an integral part of the show.

The full cast of 31 actors provides a strong ensemble, with beautiful harmonies and intricate choreography. A highlight of any Fiddler is the bottle dance, and this cast really nails it – no Velcro or magnets hiding in the hats, just lots of practice, athleticism, and talent. Ashleigh Zijdemans’  skill as a choreographer will be missed, as she is leaving for work in San Francisco – and this production is a great send-off for this TITG mainstay.

The all-teen crew tackles the complexity of prerecorded music, delivering crisp sound that does not overwhelm cast voices. The beautiful set is simple enough that set changes are fast and seamless, complemented by the intricate and effective lighting.

Theater education, oft missing from today’s schools, is still crucial – and the C.A.S.T. program does a spectacular job of bringing local youth to the stage. At only $5.00/ticket, this is the best game in town, and we hope that the entire Forest Grove community shows this production the support it merits.


Fiddler on the Roof, Jr. runs through Sunday, August 25th at Forest Grove’s Theatre in the Grove with shows at 7:00 pm on Thursday, Friday, and Saturday and 2:30 pm on Sunday.
Posted by Westside Theatre Reviews at 7:57 AM 1 comment:

Doolittle and Company Do A Lot at Broadway Rose 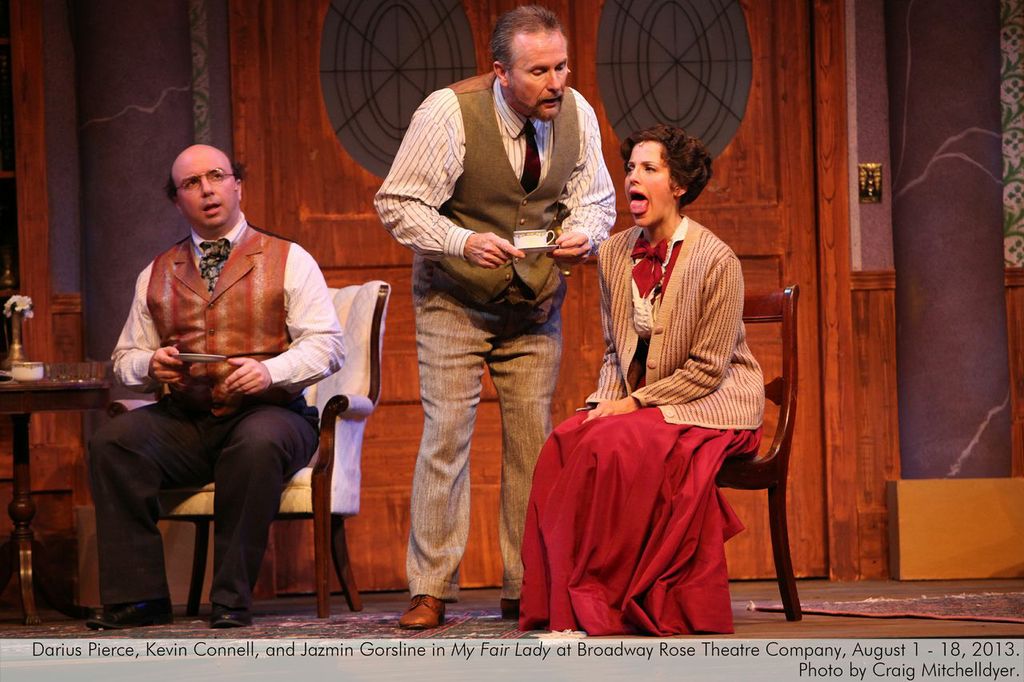 By Tina Arth and Darrell Baker
My Fair Lady is indisputably one of the best English language musicals ever written – not surprising given its Shavian antecedents. Story aside, the music has permeated our culture for over 50 years, and even people who have never seen it on stage or screen are likely to recognize such enduring songs as “On the Street Where You Live” and “Wouldn’t It Be Loverly.”

﻿﻿
Because it is a long, complex endeavor that demands an exacting blend of singing, dancing, acting (oh, those English accents!) and multiple elaborate sets, the show is not performed as often as it deserves to be. It’s bloomin’ loverly that Broadway Rose has the financial backing, theater, talent base, organizational structure, orchestra and community support to pull it off with such aplomb.

﻿
As with the songs, most theater lovers are familiar with the story of Eliza Doolittle, a Cockney flower seller plucked from the gutter by misogynist Henry Higgins and his linguist colleague, Col. Pickering.  Higgins’ boastful claim is that he will, in six months, transform Eliza’s dreadful diction and syntax so dramatically that he can pass her off as at least a duchess or, even more demanding, a lady’s maid.


Actor Kevin Connell skillfully navigates the tricky waters of Henry Higgins’ less-than-loveable personality.  He is loud, self-centered, supercilious, and pedantic but still displays moments of charm that allow us to partially overlook his multitudinous character flaws – in part on the strength of his singing. Darius Pierce (Col. Pickering) serves as a compelling sounding board – perhaps as brilliant as his colleague, but a much nicer fellow. His performance is gently effective – he is Dr. Watson to Higgins’ Sherlock Holmes.


The object of all of this linguistic expertise, of course, is Eliza Doolittle – without a powerhouse Eliza, there is no show. Jazmin Gorsline, having played the role in three previous productions, brings a wealth of experience to her part – and it really shows. She is a superb vocalist, her accent(s) are unerring, even when the script calls for rapid-fire shifts, and she develops a captivating personality as the show progresses.


Broadway Rose mainstay Dan Murphy plays Eliza’s father, the irascibly philosophical Alfred P. Doolittle. Murphy displays remarkable vocal and terpsichorean agility in two demanding song and dance numbers, and the clanking tankards maneuver in “Get Me To the Church On Time” is a real showstopper. Henry Higgins’ mother, played with surgical precision by Pat Lach, gets the biggest laughs of the evening. Her accent, timing, and oh-so-veddy British demeanor mine every line for its full comic potential.


Blake Cranston portrays ingénue Freddy Eynsford-Hill as a deer in the headlights – so enamored of Eliza that he can’t think straight. His clear tenor voice gives poignancy to “On the Street Where You Live.” Housekeeper Mrs. Pearce, played by Paige Jones, serves as a confident and subtly spunky adversary, quietly defending Eliza from Higgins’ worst verbal and emotional abuse despite her “subservient” status.


As always, the Broadway Rose ensemble is excellent – time and again, group vocals build from small beginnings to powerful crescendos. Choreographer Jacob Toth has clearly worked his cast hard, and the dance numbers are sharply captivating. Music director Alan D. Lytle and his eleven-piece orchestra tackle the complex score with an enthusiastic precision that belies the troupe’s modest size.


As mentioned above, My Fair Lady is a long show – with intermission, this production runs about three hours. We are delighted that Director Sharon Maroney did not succumb to the temptation to trim the show or rush the pacing – she allows her actors the time to explore their characters and fully develop key scenes. It may be years before a top-notch production of My Fair Lady plays again in the metro area, and we strongly recommend that musical fans take advantage of the opportunity to see this marvelous show during this run.


The Broadway Rose production of My Fair Lady runs through Sunday, August 18th at the Deb Fennell Auditorium in Tigard. 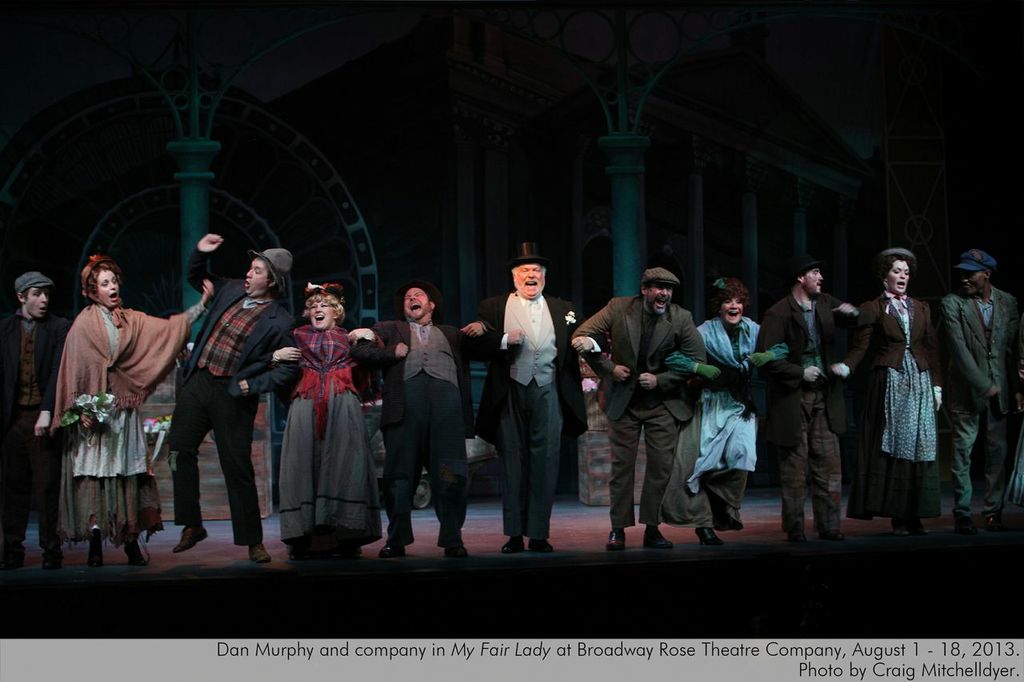 Posted by Westside Theatre Reviews at 9:29 AM No comments:

"Thought-provoking" interpretation goes beyond "adaptation"
By Tina Arth and Darrell Baker
Take Julius Caesar, one of Shakespeare’s best known and most often performed plays. Mess with the script – move things around, add new dialogue, condense from the original five to only two (relatively short) acts. Cast the almost all-male show entirely with women, stage it in the round, without amplification, and do it outdoors – in Oregon. What could go wrong? Probably a lot, but in Scott Palmer’s remarkable staging of Julius Caesar for Hillsboro’s Bag&Baggage – nothing!


Palmer’s approach to the play goes well beyond “adaptation” – his casting, costumes (wonderfully timeless creations by costume designer Melissa Heller), staging and script work together to reimagine the play into a powerful and cohesive story that breathes new life into what can be a mind-numbing maze of plots and characters. Remarkably, the all-woman cast is in many ways the least revolutionary feature – although it may be the casting that frees Palmer, his actors, and his audience from 500 years of convention. The dry, sneaky Roman patricians skulking around the Forum in togas and sandals have been stripped to their barbaric essence - a tribe of earthy, wild haired warriors passionately defending their vision of Rome’s greatness.


In Palmer’s opening address, he refers to his cast as a group of “kick ass” women, which hardly prepares the audience for the raw physicality permeating the production. Cyndi Rhoads plays the expanded role of Julius Caesar as a compelling, but somewhat delusional leader who has begun to believe his own press. Rebecca Ridenour as Caesar’s closest friend, Brutus, perfectly captures the character’s angst at being forced to choose principle over affection. Marc Antony’s assertion that Brutus was the noblest Roman of them all is abundantly supported by Ridenour’s portrayal of the tragic patriot. The second prong of the triumvirate of assassins, Cassius (Arianne Jacques), provides a powerful contrast to Brutus’ purity – Jacques gives Cassius a sly and manipulative persona that fits well with Caesar’s perception of his enemy. Clara Hillier as the third prong, Casca, offers a strong, clear voice and superb acting in a physically demanding role.


Stephanie Leppert brings to the role of Brutus’ wife Portia at least as much power as any of her “male” colleagues.   One of the most moving moments in the play comes from the skillful blend of her beautiful voice and hysterical sobbing after Caesar’s death. Cassie Greer plays Caesar’s staunchest supporter, Marc Antony, with a combination of sincere love for his leader and a sophisticated political acumen. She especially shines in Caesar’s funeral eulogy, and she gives a humorous reading of Antony’s sly oratorical skill when she “accidentally” reveals the contents of Caesar’s will to the citizens of Rome.


It is difficult to believe that there are only eleven cast members in the production – during battle scenes, with staffs flying, John Armour’s superb fight choreography relieves emotional tension by creating the sights, sounds and fury of pitched conflict. The minimalist set effectively utilizes not only the area encircled by the audience, but the entire Civic Center Plaza, to recreate the Roman Forum and the plains of Philippi.


In the hands of this astonishing ensemble of “kick ass” women, Julius Caesar delivers an entertaining and thought-provoking evening that is much more accessible to modern audiences than Mr. Shakespeare’s original work.


Bag&Baggage’s production of Julius Caesar runs through August 17th with shows at 7:30 p.m. on Thursday, Friday, and Saturday evenings.
Posted by Westside Theatre Reviews at 4:19 PM No comments: