The Rocky Horror Show at Theatre in the Grove 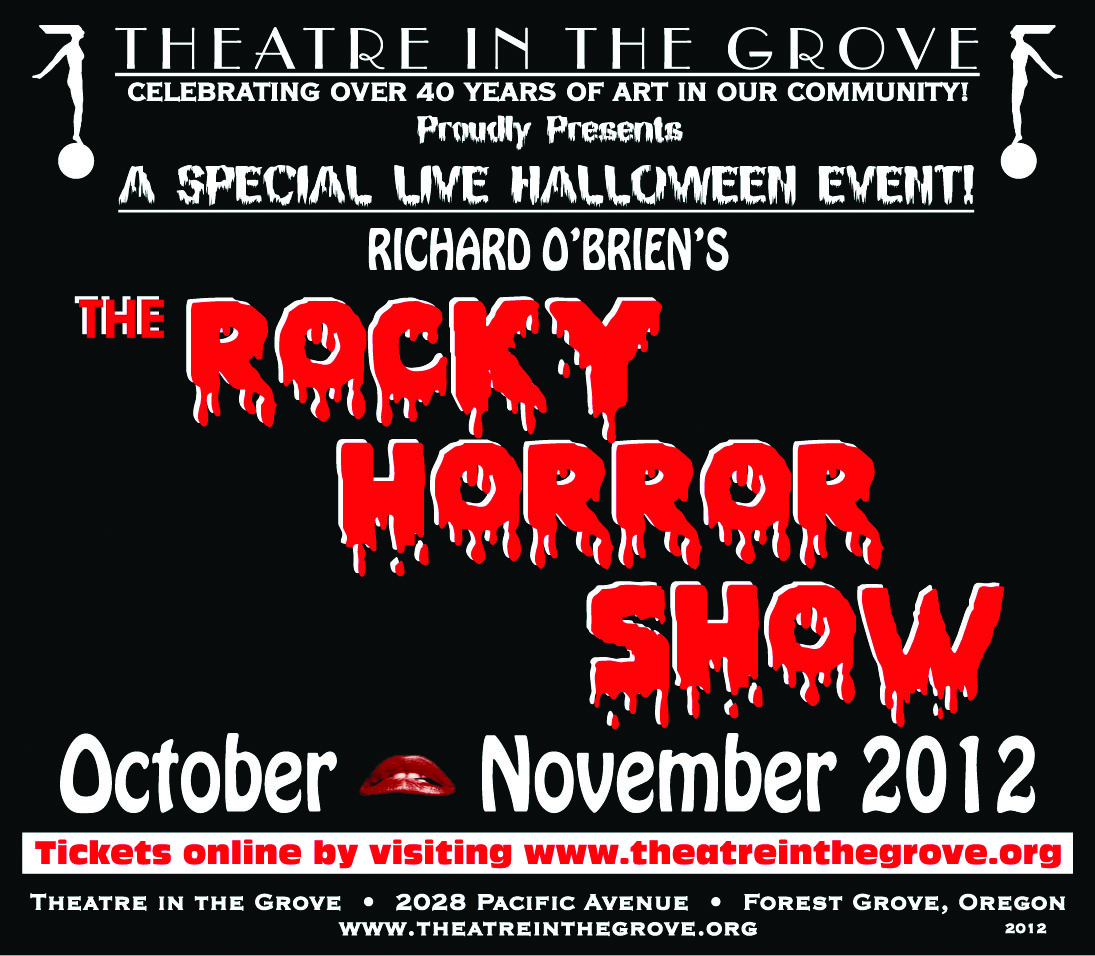 
While we have seen The Picture Show, after forty years of theater-going we still entered Theatre in the Grove’s “The Rocky Horror Show” as virgins to live performance of this cult classic, a fact rammed home to us before we left the lobby. First, we were greeted by the gaudily painted, lushly endowed, corseted usherette – then our ghoulish usher scrawled a bright red “V” on each of our foreheads before we were seated. From that point on, the madness only escalated. For the next week, we will be obediently wearing rubber poultry around our necks, having been instructed to do so by an anonymous, bearded, kilted gentleman. Presumably, he is in some way connected to the show – but in any case, he is not the sort of person one ignores. And this was at the Sunday matinee, presumably aimed at bluehairs (like us? Horrors!)  - we can only imagine how the midnight shows will go!


We won’t go into much detail about the story – if you know the show, you know it, and if you don’t know the show, nothing we tell you will be of any help. Suffice it to say that ‘50s era uber-virgins Brad and Janet, recently affianced, stumble into Frank-N-Furter’s transsexual, Transylvanian castle of love and horror on a dark and stormy night. Mayhem ensues.


“Rocky Horror” belongs to a small theatrical genre that’s all about having fun – the audience is meant to participate enthusiastically in a celebration of unbridled campiness. The key to achieving this goal is that the cast embrace the spirit and then drag (and we mean drag) the audience into the production. The TITG cast does a spectacular job, as they let it all hang out (again, somewhat literally) and exhort us to do the same – clearly, they ARE having fun, and we can do no less.


“Rocky Horror” is an ensemble show; this production features no brilliant, soaring vocals (Sarah Brightman is apparently otherwise engaged). However, the choral work is superb, especially given the physical demands made on the actors, who spend a lot of time crawling, dancing, leaping, strutting, mugging, shrieking, moaning, and leering – often while semi-naked, and balanced on terrifyingly high-heels.


Despite the ensemble nature of the show, there are many memorable individual performances. William Dober (Frank N Furter) does an excellent job of capturing his role’s complexity – one-third mad scientist, two-thirds dominant-transvestite-bisexual-libertine-host – and his powerful voice (both singing and speaking) displays his total command of the material. Brad and Janet (Justin Canfield and Abby Boardman), both solid actors, reflect the cluelessness of the audience (or at least the Rocky Horror virgins therein) and mirror our initial confusion about what is happening on stage. As they are literally stripped of their clothing (poor Brad is quite pathetic in his tighty-whities, and Janet’s retro bra and girdle leave her chastely exposed) they are simultaneously stripped of their Eisenhower era innocence. Abby’s singing voice is particularly effective at capturing the nuance of the changes she undergoes.


Rocky (Joseph Baisch) earns many of the best laughs, with his impressive physique, childlike confusion, and gold-lame (short) shorts. Usherette Kailea Saplan also merits special mention – it is her solid vocals that anchor the show, as she belts the leads in the opening and closing numbers. Among the rest of the principals (all heavy hitters), ’ portrayal of not-so-humble minion Riff Raff demands extravagant praise. In a show filled with electricity, his Ziegfeldian staircase entrance in Act II sends waves of shock throughout the audience.


Sets, direction, choreography, lighting, costumes, make-up, special effects – like the cast, all work together beautifully to bring life to this chaotic theatrical adventure. Finally, conductor Alicia Barrett leads her small orchestra with a steady hand, and her musicians deliver cacophony and harmony as the score demands.

“The Rocky Horror Show” is playing at Theatre in the Grove, , Forest Grove through November 10th Shows start at 8 p.m. on Friday and Saturday with 2:30 p.m. matinees on Sunday. Catch special midnight performances on October 31st, November 3d, and November 10th
theatreinthegrove.org


Posted by Westside Theatre Reviews at 7:57 AM No comments:


BCT Experiments with the Elements, Magic of Camelot

Camelot is traditionally staged as a huge spectacle, and it was hard for us to imagine how Beaverton Civic Theatre would handle such a complex show in the limited space available at the Beaverton City Library Auditorium. However, director Dennis Britten uses the compact stage to "fulfill his dream of directing a small, intimate" production of Camelot.  Even in the stripped-down form (there are only 18 cast members and an accompanist), it is still a monumental undertaking, perhaps the most ambitious we have seen to date by this relatively young community theater group. In many ways an experimental production, it is not surprising that some things work better than others.

What works for us? First, the phrase “stripped-down” applies to the size of the cast, not the script. Britten is to be congratulated for including every scene and every song written by Lerner and Loewe, including several that are frequently cut.  It is delightful to be able to see and hear (without time-travel to the 1964 production) the entire score. Britten also makes excellent use of the facility by occasionally putting his strong vocal ensemble into the aisles – thus expanding the available space and bringing the audience into the midst of the action. The minimalist set is beautiful, and the use of projection to change the backdrop above the castle walls is very effective.

In many ways, “Camelot” rises and falls on the strength of its Guinevere, and Marian Horton’s crystal-clear soprano lifts the production to some of its highest moments. This lovely young woman is perfectly cast, and her acting is as fluid and natural as her singing. Her performance is influenced by both Julie Andrews and Vanessa Redgrave, but the character is all her own.

Another key anchor to the show is the doddering King Pellinore, who is given short shrift in many stagings. Donald Cleland’s portrayal is a delight, as he provides both comic relief and continuity in his role as a sounding-board for Arthur’s musings. In a show this long, pacing is critical, and Cleland’s comic timing really helps to keep things moving.

Speaking of short-shrift, the character of Arthur’s illegitimate son Mordred is often dealt with as no more than an afterthought. Matthew Sunderland’s Mordred allows for no such slight – although he first appears late in the show, his booming voice, dripping with malevolent sarcasm, commands the stage whenever he is present. His powerful baritone complements several ensemble numbers, and his solo performance on “The Seven Deadly Virtues” is particularly riveting.

﻿﻿﻿
The three knights who comprise the principal men’s chorus, while not spectacular soloists, blend well – and each one shines individually in "Take Me To The Fair."The women’s chorus (ladies of the court) is even stronger, and they provide a solid vocal foundation throughout the show.

What doesn’t work? First, “Camelot” is a long show that is made longer by the decision to split it into three acts. The extra intermission contributes nothing, and interrupts the flow of the action. Second, the aisle-way-ensemble numbers aforementioned favorably above need modulation in some places – particularly in the last scene where they almost drown out Arthur’s closing monologue.

Scot Crandal, who plays Sir Lancelot, has a great voice and he uses it well. However, his performance is somewhat static – he simply needs to move more, especially in the comic “C’est Moi.”  Finally, the role of Arthur is frequently filled by actors who are not great vocalists (think Richard Burton, Laurence Harvey, Richard Harris) but whose acting skill allows them to virtually “talk” parts of their songs. Kevin S. Martin, despite a commanding physical presence, is clearly not comfortable singing some of the material, and his performance would benefit from incorporating this technique.

Despite these opening night problems, vibes from the audience were quite positive. There is a lot of talent on that stage, and director Britten generally uses it to good effect. We hope that Beaverton Civic Theatre will continue to tackle challenging projects like this one.