GUYS AND DOLLS Scores Its Point At Theater in the Grove


By Tina Arth and Darrell Baker
Nobody ever accused Theatre in the Grove of being afraid to tackle the tough ones, and the current production of Guys and Dolls (like their last play, August In Osage County) clearly illustrates this point. The large cast, intricate vocal harmonies, tricky timing, complex dance numbers, and demanding speech patterns make this show more challenging that its pre-Lloyd Webber origins might predict. Director Darren Hurley has assembled a fine cast, punctuated by some true standout performances, to bring one of our favorite shows to the Forest Grove audience.


Set in the early 1950s, Guys and Dolls presents a cartoonish tribute to some of New York City’s seedier inhabitants (cheesy nightclub dancers, gamblers, gangsters, and crooked cops) juxtaposed against a team of floundering missionaries desperate to draw sinners to their revival meetings at the “Save A Soul” mission. The two populations (and story lines) mesh when floating crap game organizer Nathan Detroit (Michael Rouches) bets inveterate gambler Sky Masterson (James Grimes) that he cannot get “Mission Doll” Sarah Brown (Carly Wasserstein) to accompany him to Havana. Through a series of misadventures, the gamblers end up in the mission twice – first to shoot craps, and later as somewhat repentant sinners.

﻿﻿﻿﻿﻿
Of the two lead couples, Sky and Sarah are always at a severe disadvantage when compared to Nathan and his perennial fiancé, Hot Box star Miss Adelaide (Jennifer Yamashiro). Nathan and Adelaide get almost all of the best comedy lines and songs, and Yamashiro and Rouches pitilessly exploit this advantage with their unbelievable performances.  Neither actor misses the opportunity to shamelessly milk a line, gesture, nuance, or scene. The timing, vocals, and pathos of “Sue Me” exemplify the genius of this pairing, and “Adelaide’s Lament “ is a thing of beauty. Another show highlight is “Marry the Man Today,” a number that gives Wasserstein a chance to shine, dumping her prim persona as she and Yamashiro conspire to ensnare their respective beaus.  Wasserstein’s beautiful soprano blends well with Grimes’ “Broadway Baritone” in numbers like “My Time of Day/I’ve Never Been in Love Before.”

﻿﻿﻿﻿
Speaking of shameless milking, Brandon Weaver’s portrayal of Detroit’s sidekick Nicely Nicely Johnson is a masterpiece – he never tries to steal a scene, yet any scene he’s in is immeasurably enhanced by his presence. From the opening number, “Fugue for Tinhorns,” through his quirky “Sit Down, You’re Rockin’ the Boat,” his powerful and lovely tenor voice shapes many of the show’s best numbers.


Guys and Dolls requires a solid male vocal ensemble, and Hurley’s cast lives up to the challenge. Justin Canfield does double duty on this score; as vocal director he has fine-tuned the chorus, and as Benny Southstreet he lends his strong voice to several challenging numbers.


We are puzzled by the decision to put the orchestra in the pit, rather than on stage as if often done at TITG. The audience is deprived of the opportunity to watch a fine group of musicians, whose presence would have added an extra spark to the Hot Box and Havana scenes. In addition, the show’s dance numbers are somewhat constrained by the need to work around two large holes in the stage, and we found ourselves occasionally distracted by the fear that a cast member might (as in the vernacular of the show) “take a dive.”  In addition, choreography for the “Luck Be A Lady” ensemble and the talented and nimble Hot Box Dancers could have been more fluid had they been working on a solid stage.


Zachary Centers’ set design is simple but attractive, and cleverly engineered to allow for frequent and rapid scene changes.  The sound was flawless – no opening night audio glitches – as was the lighting.


TITG is fortunate to have brought director Hurley back into the fold; the technical and artistic quality of his recent productions have been well-received by Washington County theater-goers, who are lucky to have had a community theater like TITG in their midst for over 40 years.


Guys and Dolls is playing at Theatre in the Grove, 2028 Pacific Avenue, Forest Grove through May 11, with performances Friday and Saturday at 7:30 p.m. and Sunday at 2:30 p.m. 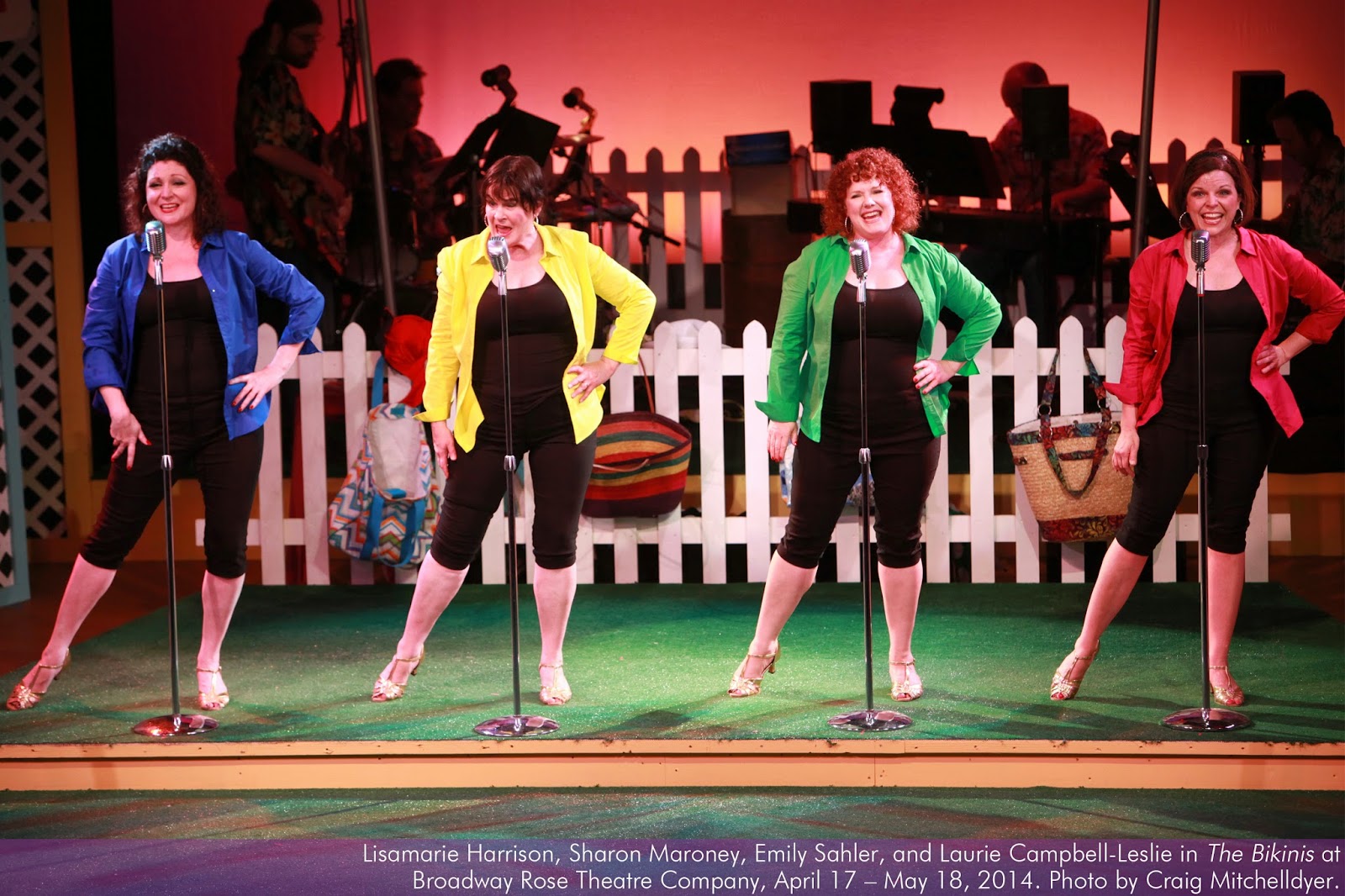 By Tina Arth and Darrell Baker
Broadway Rose General Manager Dan Murphy freely admits that at least once each season this venerable musical theater troupe takes on a light-hearted, fun show that is more concert than drama – in the vein of Jersey Boys or Forever Plaid. The current production of The Bikinis, A New Musical Beach Party is a clear example, and yet authors Ray Roderick and Jay Hindman sneak in a few surprising moments that give the audience a glimpse of the world beyond the antics of Frankie Avalon and Annette Funicello’s Beach Blanket Bingo.


The storyline is appropriately thin, befitting what is essentially a musical review. In 1964, four bikini-clad girls win the Belmar Beach Talent Contest, and become The Bikinis, one-hit wonders of the Jersey shore. After several years playing every birthday party, wedding, bar mitzvah, and mall opening in the greater Paramus area, the group inevitably breaks up, and the four young women go their separate ways. Fast forward to 1999, when a condo developer is offering the residents of the Sandy Shores Mobile Home Beach Resort, including group member Annie, $250,000 each to sell out. The Bikinis reunite for one concert to support the trailer park residents as they prepare to vote on the developer’s offer (fiercely opposed by erstwhile Bikini and park resident Annie, fiercely supported by her sister and fellow singer Jodi). How does the vote come out? You’ll have to see the show – it’s a real sandy cliffhanger! 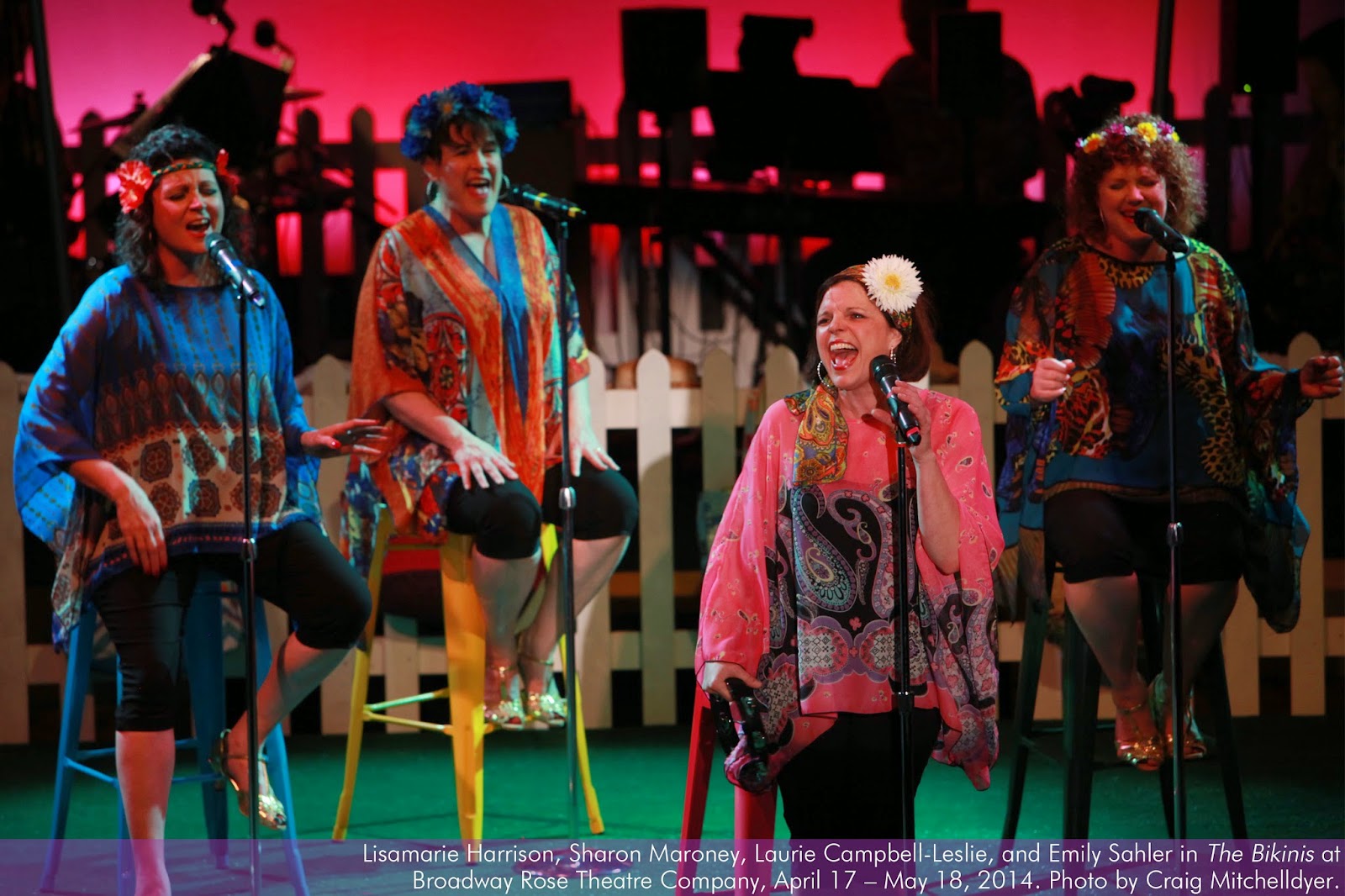 Of course, this is Broadway Rose, so the audience is treated to four superb vocalists (Laurie Campbell-Leslie, Lisamarie Harrison, Sharon Maroney, and Emily Sahler) supported by four hot musicians (Jeffrey Childs, Gary Irvine, Justin Jude Carroll, and Fletcher Nemeth). The beautiful solo performances and smooth, powerful harmonies evoke the best of the ‘60s girl-group era, illustrate the late ‘60s transition to more socially conscious, hippie-driven themes, and end with popular music’s (from our perspective, tragic) devolution to disco.  Despite the fact that the Bikinis no longer sport their teenage beach bodies (and are, happily, clad in less revealing attire) the four women not only retain their vocal chops, they also nimbly and playfully master the choreography of long-lost dance moves like The Swim, The Twist, The Pony, and The Mashed Potato (we even think we saw a trace of The Jerk!).


Of the 30+ musical numbers, special highlights include “Under the Boardwalk”, “These Boots are Made for Walkin’”(a hysterical send-up of a song we love to hate), “Ain’t No Mountain High Enough,” “Look What They’ve Done to My Song, Ma” and “When Will I Be Loved.” However, the strongest moments in the show revolve around the second-act Vietnam era pictorial montage and associated songs. The poignant rendition of Bobby Darin’s “Simple Song of Freedom” with its accompanying narrative gives the audience a frisson of nostalgia for deep wounds and innocence lost, while “Dedicated to the One I Love” (against a visual background of soldiers and their loved ones) brought the opening night audience near tears and captured the most enthusiastic applause of the evening.


The beautiful set (who woulda thought a trailer park could be pretty?), clever lighting, seamless special video effects, and flawless sound combine to support the concert-like feel of the evening. Director Jacob Toth and Musical Director Jeffrey Childs make the most of the amazing talent at their disposal, giving the audience exactly what it wants – a fun and sometimes wistful journey into a cherished past.


The Bikinis is playing at the Broadway Rose New Stage, 12850 SW Grant Avenue, Tigard through May 18th.  Date, time, and ticket information is available at the website, www.broadwayrose.org.


Posted by Westside Theatre Reviews at 9:57 AM No comments: