With its vibrant production of “The Andrews Brothers,” Broadway Rose Theatre Company brings two hours of non-stop ‘40s-style musical entertainment to Tigard’s New Stage Theatre. The company, from start to finish, draws everyone into the production – first by honoring any WWII veterans in the audience, next by recognizing all veterans present. Whether it was at Guam, Kyongson, Da Nang, or Kabul, the United Service Organizations (U.S.O.) have been bringing a slice of home to U.S. soldiers since 1941, and this show is an affectionate tribute to the U.S.O.’s many years of service.

The set-up is simple – the Andrews Sisters have a show at a military base in the South Pacific for a group of soldiers going off to battle the next day. Three stage-hands, brothers who are frustrated entertainers, have developed a repertoire of musical numbers that they can never hope to perform on stage. When pin-up gal Peggy Jones (Louise Stinson), the warm-up act, arrives the stagehands pretend to be back-up singers and the foursome rehearses a series of WWII-era classics. Word comes in that the Andrews Sisters have been quarantined and the show is to be cancelled. In the best musical-comedy tradition, of course the show must go on. Unwilling to disappoint the troops (and eager to showcase their talents), Act I closes as Peggy talks the boys (conveniently named Patrick, Max, and Lawrence Andrews) into doing the show – in drag, as Patty, Maxene, and LaVerne. In Act II, the set is transformed into the actual U.S.O. show, and voila! The theater audience fills the role of the battle-bound troops.


Almost all of the show’s songs are ensemble numbers, capitalizing on exceptional vocal harmonies while showcasing each performer’s individual abilities. The near-flawless performances are as much a tribute to Jeffrey Childs’ musical direction as they are a reflection of the cast’s uniformly strong singing voices.  The few solo numbers belong to Stinson, who fluidly shifts from her girl-next-door persona to sultry vamp depending on the demands of the song. Adam Elliot Davis (“Max”), James Langston Drake (“Patrick”), and Norman Wilson (“”) blend beautifully, and their comic timing is impeccable. Through a combination of directorial sleight-of-hand and sheer breath control, they are able to sustain rapid-fire, demanding vocals through a hilarious series of tumbles, climbs, pratfalls, and splits that would demolish many contemporary artists. Despite the stereotypical plotline, all four cast members succeed in creating believable and likeable characters who thoroughly charm their audience.


Special recognition is due to pianist (and conductor, and music director) Jeffrey Childs, bassist Jonathan Lakey, and drummer Rene Ormae Jarmer, who carry the entire musical score of the production.  The first-act set was simple, but amply fulfilled its purpose to establish the foundation for Act II’s stunning transformation into an “actual” U.S.O. stage.

Finally, kudos to director Dan Murphy, who clearly understands the music and mores of the show’s era and guides his talented cast and crew through the process of creating a magical escape for his audience.


“The Andrews Brothers” runs through May 20 at the Broadway Rose New Stage in Tigard. Performances are 7:30 p.m. Thursdays – Saturdays, with 2:00 pm matinees on Saturdays and Sundays.
Posted by Westside Theatre Reviews at 8:09 AM No comments: 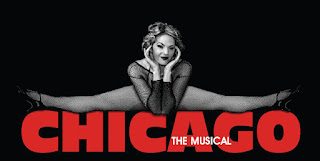 Theatre in the Grove's Production of 'Chicago' has heat

If you’re going to do a brassy show, you’ve got to come on strong – and that’s exactly what Theatre in the Grove is doing with their jazzy rendition of “Chicago” that runs for the next two weeks.


From the opening notes, belter Jody Coffman (as Velma Kelly), the ensemble, and the lively 20’s style orchestra lets you know who’s in charge. Velma’s “Mermanesque” rendition of “All That Jazz” sets the stage for a rapid-paced series of vaudevillian numbers that define, with comic-book clarity, the sordid stories of a fictional group of ’s most famous murderesses. Frequent narrative interjections ensure that, despite minimal dialogue and sets, the audience is told exactly what is going on. This is a singing and dancing show, and , along with Vocal Director Justin Canfield and Choreographer Ember Eastman take full advantage of their cast’s abilities.


The entire show runs smoothly – the sound is crisp and clear, the orchestra does not overpower the vocalists, and the lighting does a great job of setting the locale and enhancing the mood for each scene. Costumes deserve special recognition, for they are evocative of the 20’s, but are cleverly designed to express the ambiguity of the individual performers’ personalities.


If the enthusiasm of the nearly full-house opening night crowd is an accurate gauge, “” is being embraced by its community – as well it should be!

Posted by Westside Theatre Reviews at 8:45 AM No comments: