The Crucible at BCT


Witch-hunts. They form a recurrent theme throughout recorded history. Like it or not, the potential exists in all cultures for an outbreak of “endemic persecutory mania,” where a society suffering from mass paranoia turns upon itself. Arthur Miller’s classic play The Crucible, while written in direct response to the political “witch-hunts” of the McCarthy era, is as pertinent and potent today as it was over sixty years ago.


In Beaverton Civic Theatre’s current production of The Crucible, director Doreen Lundberg demonstrates a penetrating comprehension of Miller’s essential themes. In a show where the actors too frequently go over the top, but rarely plumb the depths of their characters, Lundberg elicits restrained but powerful performances from her 21-member cast.


The play is based on the actual Salem witch trials of the late 17th century, when over a six-month period 19 “witches” were hanged (and one reluctant witness pressed to death) on the basis of evidence from a group of hysterical young girls. In Miller’s version the girls’ afflictions are orchestrated by 17-year-old Abigail Williams, the jealous and delusional ex-lover of farmer John Proctor, in order to get rid Proctor’s wife Elizabeth. Ironically, Elizabeth (and her unborn child) survive the ordeal, while John Proctor hangs.


The story opens with the Rev. Samuel Parris (Aaron Morrow), Abigail’s uncle, bemoaning his fate while sitting at the bedside of his nearly catatonic daughter Betty (Addison Groendes). Over the course of the play, Morrow convincingly takes his character from the self-centered and self-pitying accuser to the recalcitrant and broken man who, too-late, faces his culpability for the horrors visited on Salem.  Like Parris, Ann and Thomas Putnam (James Bass and Valarie Griffiths Brown) have a daughter who appears to be afflicted. Brown effectively conveys Ann Putnam’s despair (having lost seven children she cannot bear to lose another) and anger at the pious midwife Rebecca Nurse (Virginia Kincaid), who is mother to eleven and has never lost a child.


Kraig Williams is simply brilliant in the role of the Rev. John Hale, the scholarly witch hunter brought to Salem by Parris to investigate the bizarre and frightening behavior of the “afflicted” girls. His original goal is to discover and expel the devil from the community – but by the end he finds that the real evil is in the court itself, and that he has no power to stop this destructive machine. His transition from true believer to shattered doubter is a moving testimonial to the play’s deepest themes.


John and Elizabeth Proctor (Seth Haas and Letitia Maskell) are the driving forces propelling the play to its tragic conclusion. Seth Haas brings a subtlety to his role that may be unexpected to fans of Daniel Day Lewis’ angry performance in the movie version. Haas finds in Proctor’s character a maturity and thoughtfulness that elicits sympathy without histrionics.  The modern audience has no trouble relating to Haas’ believable performance as a complex, flawed, but essentially good man. Letitia Maskell’s interpretation of Elizabeth Proctor’s tortured position matches Haas’ performance in its integrity and intensity.  Elizabeth’s shame, fear, and anguish flow from her husband’s infidelity, and Maskell shows a steely tenderness that captures every nuance of the role.


The strength of this production is, in part, in the restraint shown by the actors – and this is nowhere more clearly illustrated than by the afflicted girls. In place of unbridled (and potentially comic) hysteria, the audience sees a much eerier and colder Stepford Wives/Village of the Damned ensemble under the thumb of the truly evil Abigail Williams (Kira Batcheller).  Of this group, only Mary Warren (Marina Neal) ever attempts to reveal the girls’ duplicity. Neal brings real emotional depth to the dramatic shifts in her character.

W. Paul Brewster provides a few moments of dark comic relief in the role of Giles Corey, whose stubborn individuality leads to his ultimate demise (he is the lucky fellow who gets pressed to death).  We cannot ignore the almost-diabolical duo of self-righteous judges (Steve Holgate as Governor Danforth and Chris White as Judge Hathorne). White’s eagerness to “hang ‘em high” contrasts, but ultimately complements, Holgate’s pretentious vision of even-handed but inhumane “justice.”


Set designer Alex Woodard and the construction crew have produced a beautiful backdrop for the play’s events that captures the stark simplicity of the Puritan era. Scene changes are efficient and swift, a welcome feature in a long play.


BCT’s excellent production of The Crucible deserves as full and appreciative a house at every performance as it had on opening night.


The Crucible is playing through October 13th at the Beaverton City Library auditorium. Performances are at 8:00 p.m. on Friday and Saturday, 2:00 p.m. on Sunday. 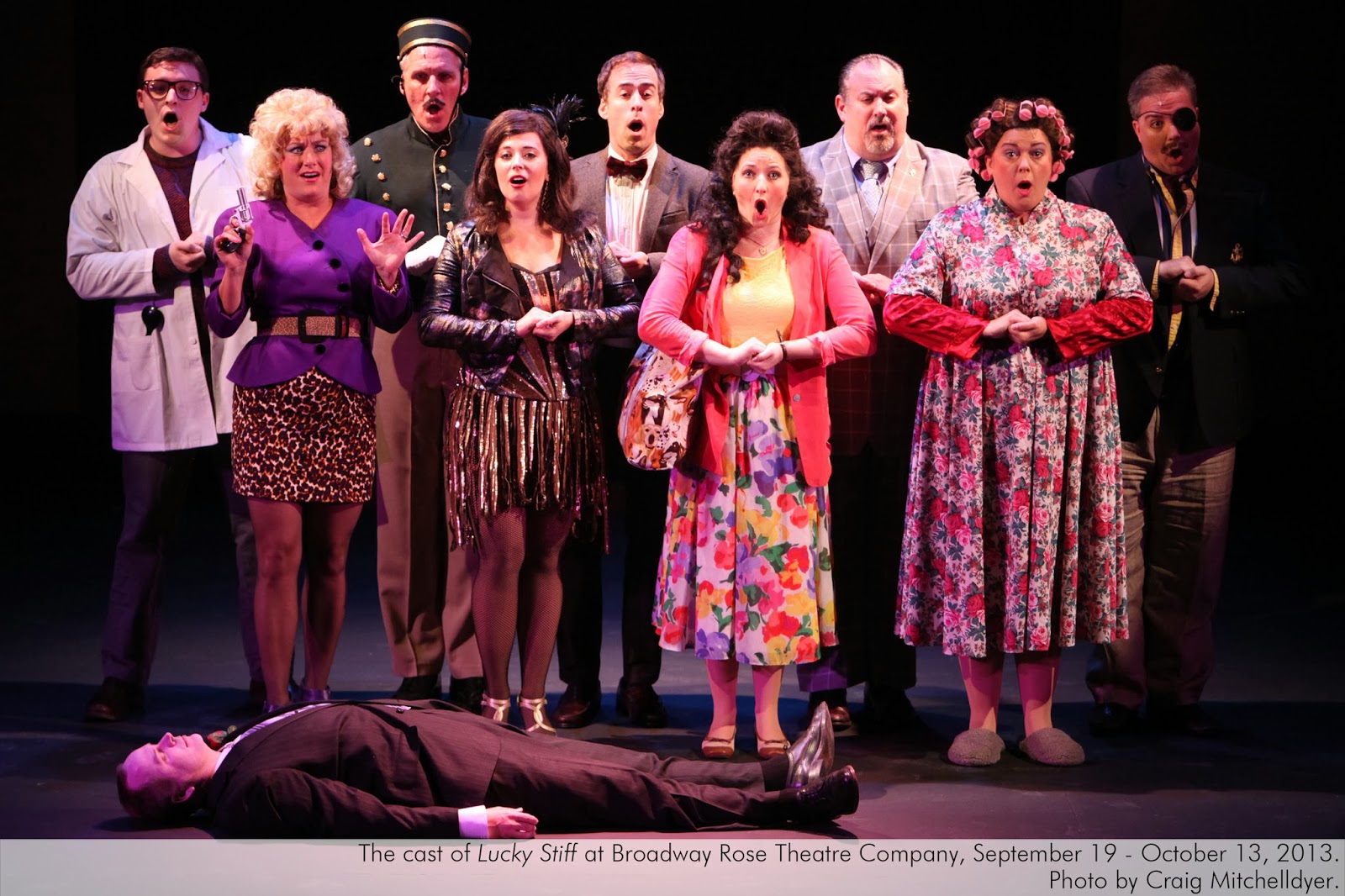 Broadway Rose’s current show, Lucky Stiff, is the first product of a highly successful collaboration between lyricist Lynn Ahrens and composer Stephen Flaherty (Once on This Island, Ragtime, Seussical). It is an absurdist murder farce – sort of “comedy of errors” meets “Dashiell Hammett” – but with lots of singing and a fair amount of dancing. Luckily for the audience, Broadway Rose never does anything by half-measures, and the quality of this production transforms what could be two hours of formulaic fluff into a great evening of entertainment.


The story itself is predictably convoluted and nonsensical. Harry Witherspoon, a downtrodden, dog-hating British shoe salesman, inherits six million dollars from his long-lost American uncle, Tony Hendon – but there are strings attached. In order to claim his inheritance, Harry must treat Uncle Tony’s embalmed corpse to a weeklong vacation in Monte Carlo – gambling, sky- and scuba-diving, the works! Should Harry fail, Uncle Tony’s millions will go to the Universal Dog Home of Brooklyn.  Harry’s efforts to fulfill Uncle Tony’s wishes are countered by the machinations of Tony’s lover, Rita LaPorta, and by Universal Dog Rescuer Annabel Glick. Suffice it to say that things get complicated.
Robert Winstead brings his extensive experience as a vocalist and a comic to the role of Harry Witherspoon. His English accent is convincing, and his marvelously expressive face clearly conveys both the pathos and the determination of his character. Winstead sings on more than half of the show’s songs, and his solid vocal performance buttresses several fine ensemble numbers. His duets with the lovely soprano Ecaterina Lynn (“Annabel Glick”) are especially effective  - comic or poignant as the story demands. Lynn’s earnest, dog-loving fanaticism is a perfect foil for Winstead’s befuddlement, and the two share many of Lucky Stiff’s funniest moments – especially in the brilliantly staged bedroom/dream sequence.
Amy Jo Halliday brings a frenetic bimboism to the part of Rita LaPorta, Uncle Tony’s extraordinarily classless half-blind lover (she refuses to wear her glasses) and accidental murderer.  Her over-the-top character is matched by the power of her brassy vocals, and she knows just how far she can push the role. David Smidebush displays remarkable physical fluidity throughout; his spectacular tap dancing helps to make “Harry’s Nightmare,” a captivating bit of stage magic and choreography, the high point of the show.
Other noteworthy performances include Darren Hurley’s turn as the lounge-lizard/maître d’hotel/singing nun/Arab and Catherine Bridge’s portrayal of Dominique, part b-girl, part Spanish dancer, all femme fatale.  The ensemble, as expected with any Broadway Rose production, is flawless. Music director/conductor/pianist Alan D. Lytle once again brings vocal and instrumental magic to the New Stage.
Director/choreographer Dan Murphy presents what may be the cleverest staging of any show we have seen in recent years.  In addition to the above-mentioned bedroom/dream sequence, the series of vignettes showing Witherspoon, Uncle Tony, and Annabel parachuting, scuba diving, and fishing their way across the stage keeps the audience in stitches.  Lucky Stiff may not be terribly profound, but this production provides high quality musical theater and immerses its audience in an evening of beguiling entertainment.
Lucky Stiff is playing at Broadway Rose’s New Stage, 12850 SW Grant Avenue, Tigard through October 13th.


Posted by Westside Theatre Reviews at 1:18 PM No comments:

By Tina Arth and Darrell Baker
In a world where even a modest community theater offering can cost thousands to produce, it is nice to know that a minimalist show like The Fantasticks still speaks to audiences, as it has since its initial 42-year, 17,162 performance off-Broadway run. The power of the show, when properly done, is in the simple story and the tiny band of actors who tell the tale. H.A.R.T. Theatre, under the direction of Glen York, brings just such a Fantasticks to the Hillsboro stage.

The program sets the scene; even before the actors appear, we read that the setting is “Time: A little while ago” and “Place: On stage.”  Two boxes, a bench, a ladder, a crudely framed platform, some sticks, a fine pianist (Linda Smith), and the omnipresent Mute (Heather Sutherland) replace the full pantheon of sets, special effects, and orchestra that normally clutter up more lavish shows.


The 1960 musical by Harvey Schmidt and Tom Jones is loosely based on “Les Romanesques,” a play by Edmund Rostand of Cyrano fame. The story is as simple as the set, and makes no more pretense at realism. A boy, a girl, two fathers, a wall (good job, Heather!), and a (literally) fantastic trio of faux villains tell the tale of young love denied, realized, forsaken, and reborn – all this in under two hours with songs!


Jake Beaver (The Narrator, El Gallo) anchors the small but mighty cast with an impressive combination of timing, physical comedy, tongue-in-cheek delivery, and surprisingly sensitive vocals.  Matt Rowning and Sarah Thornton are effective in their portrayals of Matt (The Boy) and Luisa (The Girl). Rowning brings a charmingly nerdy touch to the role that makes his turn as a hero particularly funny.   In a less balanced cast, Thornton would simply steal the show.  She has a lovely and powerful voice and well-honed comic timing; her wide-eyed innocence does little to prepare us for the fiercely independent woman who emerges in Act II.


Stan Yeend and Nick Hamilton as the fathers are triple threats – their voices blend beautifully, the dance numbers are beyond hilarious, and they deliver their lines with understated comic subtlety.  While “Try to Remember” is the best-known song from the show, Hamilton and Yeend make “Plant a Radish” the most memorable number in H.A.R.T.’s production.


Blatant comic relief is provided by two of the funniest guys we’ve seen this year – William Wilson (The Old Actor) and Seth Rue (The Man Who Dies).  This mismatched duo brings the unmatchable flair of two-bit overactors to roles that demand unrestrained physical comedy.


Solo, duet, and ensemble numbers all display the sure hand of vocal director Alice Dalrymple, who makes the most of an already talented group of singers. Maria White’s quirky costumes cast a complementary aura of surrealism that supports the director’s vision.
If you’ve never seen The Fantasticks, H.A.R.T.’s production is a great introduction. If you know and love the show, you don’t want to miss this marvelously intimate offering of a theatrical icon.


The Fanstasticks runs through Sunday, September 22 with performances at 7:30 p.m. on Fridays and Saturdays and 2:00 p.m. on Sundays at H.A.R.T. Theater, 185 S.E.Washington, Hillsboro.