TITG’s Oklahoma – the Right Show in the Right Place

Judging from the turnout at Sunday’s matinee, Rodgers and Hammerstein’s Oklahoma still has the power to draw huge and enthusiastic audiences 75 years after its 1943 Broadway debut. Overall, Theatre in the Grove’s ambitious undertaking of the first American musical to thoroughly integrate the music with the story works well, managing to keep the audience engaged despite its length (over three hours with intermission, as Director Jason Weed opted not to delete any of the show’s musical or dance numbers). A few bobbles and probably unavoidable casting decisions are all that prevent the production from crossing over the line from fine community theater to fine theater – but there are enough great moments and superb performances that any Oklahoma fan, or any lover of classic musical theater, will be glad they made time to see the show.

Set in the Oklahoma Territory in 1906, just before Oklahoma was granted statehood, the show tells the story of farm girl Laurey Williams and her beau, cowboy Curly McLain. While the young couple stubbornly refuse to admit their feelings for each other, Laurey is also courted (or perhaps “stalked” is a better word) by farmhand Jud Frye, an angry misfit whose longing for young Laurey leads to a world of trouble and hurt. A secondary story is the tale of Laurey’s friend Ado Annie, a libidinous young thing who juggles the ardor of her absent boyfriend Will Parker and the all-too-present traveling peddler, Ali Hakim. Underlying the action is the tension between the homesteaders and the cowboys, fences and plows vs. cattle on the open range. Contemporary themes of uniting a divided society and addressing sexist double standards ring true today – and Jud Frye’s story is frighteningly relevant in an era just coming to grips with the relationship between societal rejection, casual bullying, and mass murder.

Austin Hampshire, a newcomer to TITG (and to acting – he’s a classically trained vocalist just transitioning to theatrical performance) brings his lovely voice to Curly’s big numbers like “Oh, What a Beautiful Mornin’’ and “Surrey with the Fringe On Top.” It’s a stretch for him to completely master the role’s arrogant cowboy swagger, but he makes a game attempt and establishes some believable chemistry with Jade Tate’s Laurey.  Tate and Hampshire blend beautifully in “People Will Say We’re In Love,” and Hampshire’s slyly heartless delivery of “Pore Jud Is Daid” is a real highlight of the show.

I applaud the decision to cast Tate as Laurey – the petite brunette doesn’t look like any Laurey I’ve seen before, but she brings tenacity to the role that belies her fragile appearance, and she completely nails both solos and duets. Brandon Weaver turns in a stunning and original performance as Jud Frye – he finds an intriguing middle ground between aggressor and victim that expresses a very 21st century view of Frye’s angry and tortured character.

Sarah Thornton creates a marvelous Ado Annie – cute as a bug, funny, insouciant, and just dumb enough to justify her thoroughly wacky behavior. The chemistry between Thornton and Scott Smith (Will Parker) is inspired, their story lightens up a sometimes dark tale, and he handles the challenging song and dance routine required in “Kansas City” like a pro. Benjamin Philip’s broadly comic take on Ali Hakim is often brilliant – when he’s supposed to be center stage he grabs our attention and elicits lots of well-deserved laughter. However, there are moments when he needs to turn down the flame a bit and just blend with the ensemble – and while it’s amusing there’s just no room for a Charlie Chapin imitation in Oklahoma.

Weed’s decision to place the orchestra on stage works well, despite the loss of space for the large cast. The skilled performers look natural in the gazebo that evokes a small-town bandstand, and the few moments when the actors briefly interact with musicians are a nice touch. The rest of the set is equally effective – a lovely backdrop, convincing farmhouse, and darkly sinister hovel (that moves quickly – a real plus!) for Jud Frye’s grimy smokehouse. Brian Ollom’s lighting design complements much of the action, although the lighting in the dream sequence would work better if the second half were much darker.

Theatre in the Grove has picked a sure-fire winner – they clearly understand the community and know how to keep the customers satisfied. While there are no really bad seats in the theater, the best spots often go early, so it’s a good idea to buy in advance.

Oklahoma is playing at Theatre in the Grove, 2028 Pacific Avenue, Forest Grove through April 29th, with performances Friday and Saturday at 7:30 p.m. and Sunday at 2:30 p.m.

Posted by Westside Theatre Reviews at 11:56 AM No comments: 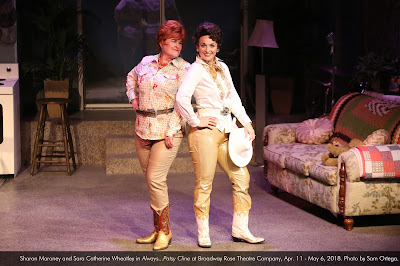 
One look at the opening night audience made it clear that Broadway Rose’s decision to bring back a popular, enormously successful, brilliantly performed show after a 5-year hiatus is definitely a revival, not a recycle! Sara Catherine Wheatley and Sharon Maroney are reprising their roles in creator Ted Swindley’s Always… Patsy Cline, a musical love letter to the beautiful powerhouse who broke the glass ceiling, barriers between country and pop, and millions of hearts in her short singing career. If you’ve never seen it – go. If you saw it somewhere else - go. If you saw one of the two previous Broadway Rose productions, then I don’t need to tell you to go – you’ve already figured it out – and hopefully bought your tickets, as many performances are already close to sold out.

While it is in many ways a tribute concert (adorned with Wheatley’s renditions of 28 songs from Cline’s huge repertoire), there is a solid narrative, based on a true story, to carry move the evening along. To reprise my 2013 review, “The show is based on the real-life relationship between Patsy Cline and an ardent fan, Louise Seger. Louise fell in love with Patsy’s music after hearing her on the Arthur Godfrey Show, and spent one night as Patsy’s self-appointed manager and hostess that led to a lasting friendship between the two women. The story is told by Louise talking directly to the audience, direct conversations between Louise and Patsy, Louise’s imagination, Patsy and Louise interacting with the band, and of course the songs that Patsy sings in a foot-stomping couple of hours.”

Wheatley is simply amazing – if anything, her voice is even richer and her grasp of Cline’s vocal and personal mannerisms more accurate than the last time I saw her play the role. To again plagiarize the 2013 review, “Wheatley’s vocal ability and stage presence recreate the magic that can only be experienced when a first-rate performer is seen live – recordings just do not capture the exuberance or the intimacy that we imagine Patsy Cline must have brought to the stage. Remarkably, Wheatley achieves this without overt imitation – her vocal style, while reminiscent of Cline’s, is distinctly her own…”

As the star struck Houston divorcee Louise Seger, Sharon Maroney brings just the right touch of just-us-folks charm to her role as narrator and supporting character. Her spectacularly tacky attire presents a nice counterpoint to Wheatley’s increasingly elegant costumes and coiffures, and the rapport between the two women while they giggle, gossip, and cook up a mess of bacon and eggs tells us everything we need to know about Cline’s folksy roots.

Musical director/conductor/pianist Barney Stein has again done an extraordinary job of creating a true country band, placed right on stage where they ought to be - and the band’s frequent interactions with their vocalist, both joking around and in occasional vocal harmonies, precisely capture the egalitarian feel so critical to the creation of a down-home barn ambience.

In his program note, Director Chan Harris highlights the importance of genuine friendship in a world where texting and social media have often replaced the beauty of real human contact. For a couple of hours last Friday, I was transported from 2018 to 1961, able to put my worries aside and hang out with 200+ fellow music lovers. I strongly recommend that you do the same!

Posted by Westside Theatre Reviews at 9:37 AM 2 comments: