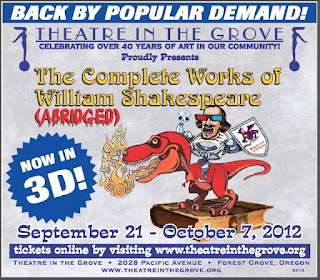 Theatre in the Grove brings Culture,

Don’t bother to read this review in its entirety before you navigate to Theatre in the Grove’s website to buy tickets to see “The Complete Works of William Shakespeare (Abridged).” Don’t waste your time worrying that Forest Grove is too far to go – it’s not THAT far, even if you live within spitting distance of the line. Don’t take a “wait and see” attitude – the show closes next weekend, so there are only three more performances. As a local firm of some international repute regularly advises, “Just do it.”

Imagine the best of the Marx Brothers, the Three Stooges, and Monty Python distilled into 97 minutes of wit, slapstick, cross-dressing, uplifting intellectualism, and unbridled mayhem, all directed rapid-fire at Shakespeare’s plays– all 38 of them. Some, of course, are given short shrift (Coriolanus, for example, is slighted because of an aversion to the final two syllables of the title). On the other hand, Romeo and Juliet gets comprehensive coverage, with loving attention paid to death scenes. Hamlet (the entirety of Act II) goes above and beyond – it is presented thrice (in increasingly abbreviated form) before the finale – where it is performed backwards (thus ensuring a happier ending!).  Perhaps most amazing is their synthesis of the entire catalogue of Shakespeare’s historical plays into a single scene of maniacal abandon.

This feat of theatrical sleight of hand is achieved by only three performers (aided and abetted by the audience and the long-suffering Bob the Dummy, who absorbs some of the deadliest blows). Adam Barrett, , and Dan Cleveland use their considerable acting skills to play scores of roles, male, female, and ???  Under the nimble direction of , the three men form a cohesive unit, and their synergistic relationship forms a bizarre but captivating whole that is even stronger than the sum of its parts. The frantic pace is sustained through a combination of physical prowess, comic timing, and crisp, clear diction that keeps the audience in the loop throughout.

We have not seen a funnier show in years, and it wasn’t just us. At the performance we attended, everyone in the house laughed convulsively throughout the show, and the occasionally risqué humor was never offensive to anyone in the very diverse audience.

Our only criticism is with the final bows – the performers’ many quick-changes could not have been effected without the spot-on assistance of their three costume dressers, Brittney Spadey, Leslie Collins, and Alicia Barnett. These three hard-working ladies deserve a bit of the spotlight (provided, of course, by lighting wizard Berk Schwartz).

“The Complete Works of William Shakespeare (Abridged)”runs through Sunday, October 7th at the Theatre in the Grove, , Forest Grove.

Posted by Westside Theatre Reviews at 8:07 PM No comments:


We started writing this review over lunch at one of our old standby Chinese restaurants, where we ordered pretty much the same things we always get. However, the meal took us by surprise – as did Broadway Rose’s ongoing production of another favorite, “Little Shop of Horrors.” In both cases, the comfortable and familiar was enhanced by subtle but unexpected twists in presentation.


For those not familiar with the premise, here it is in a nutshell: Skid Row florist’s apprentice and aspiring botanist Seymour discovers a “strange and unusual plant” that brings much-needed foot traffic to Mushnik’s fading business. secretly pines for shop assistant Audrey, a ditzy blonde with poor taste in clothes and worse taste in men (in particular, the incredibly sadistic and abusive Orin Scrivello, DDS). The plant needs blood to thrive, and the evil dentist’s accidental demise provides with an ample initial food source for his beloved plant.  Florist flourishes, gets the girl, but the plant proves to be insatiable…


We love “Little Shop”; not only have we seen countless productions, but Darrell played the role of Mushnik back in the ‘90s. Our previous exposure had been to a show conceived and delivered in the best satirical, comic-book tradition, peopled largely by two-dimensional characters (in particular the ditzy blond Audrey, and the hapless nebbish Seymour). Director Abe Reybold has embraced a contemporary take on Ashman and Menken’s classic that allows his actors to more fully develop their characters, and the result is amazing.


The first clue that this production has real roots is the opening number – the lights come up on the three “Doo-Wop” girls (Erica Jones as “”, Lindzay Irving as “Ronnette”, and Beth Sobo as “Chiffon”) and they are a lot like the brash, mouthy blue-collar teens one might actually find in a poor neighborhood. Of course, there might be no blue-collar teens on Skid Row if they could all sing like this trio! Each of the three was a fine actress able to develop a distinctive personality. Likewise, vocal solo spots displayed their powerful individual voices in addition to the expected tight harmonies.
Bobby Ryan’s “”, while still a loser, is less stereotypically pathetic, clumsy, and hopeless than is usually seen.  His shows the potential for growth, and he delivers his lines with an eye to character, rather than just playing for laughs. He has a fine musical comedy tenor voice and uses it well throughout, most effectively in the “Suddenly Seymour” duet with Audrey.


Darren Hurley tackles the somewhat thankless role of Mr. Mushnik with the requisite chutzpah. His solid baritone voice blends well with the ensemble, and his Tevye-like take on the “Mushnik and Son” scene is hilariously cantorial.


“And then there’s Audrey, lovely Audrey…” A real standout, even in such a strong cast, Rebecca Teran portrays her character with no trace of the iconic Ellen Greene’s cartoonish approach. Teran’s Audrey is a real woman who dreams of escaping the squalor of her tenement and her life, but who sees no path out of Skid Row until, suddenly, shows her the way. The highlight of the evening is Teran’s incredibly moving “Somewhere That’s Green.” She takes a classic comic ballad and, with timing and sheer vocal and acting ability, turns it into a work of art.


Many of the evening’s best laughs go to Brian Demar Jones, who plays several cameo roles in addition to the wonderfully psychopathic dentist. Jones’ dentist is so dark that, for the first time, we really worry about the puppies and the BB gun – and yet his rubber-legged fluidity, absurd costuming, and sense of timing keep the character within the realm of comedy. Jones more than delivers in the singing department, as he demonstrates in both “Dentist!” and “Now (It’s Just the Gas)”. He is listed in the program as “Orin and Everyone Else” and his quick-change antics toward the end of Act II bring down the house.


The ever-expanding plant, Audrey II, is superbly brought to life through the teamwork of puppeteer Jeremy Garfinkel and vocalist Jerrod Neal. Between the two of them, they are able to give the plant a frighteningly menacing affect, underscoring the wisdom of “Don’t Feed the Plants.”


The sets, lighting, sound (always tricky for “Little Shop”) and band all combine to create just the right backdrop for yet another wildly entertaining evening at Broadway Rose.  The night we attended, it was clear that about half of the audience knew the show well, and half were Little Shop virgins with little idea of what to expect. Reybold’s success as a director was illustrated by the fact that all of us were given a delightful surprise

“Little Shop of Horrors” is playing at the Broadway Rose New Stage in Tigard through October 14th.
Posted by Westside Theatre Reviews at 4:56 PM No comments:

Gracie for President at HART

Paul Roder brings George Burns to life in the presidential-spoof  of a production. 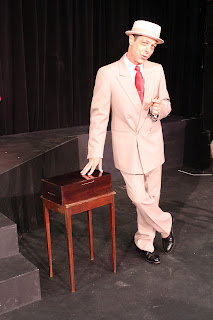 The only thing in theater that is riskier than attempting to imitate an icon is attempting to imitate two icons, especially when it’s two characters like George Burns and Gracie Allen. ’s HART Theatre’s production of “Gracie for President” bravely takes on this challenge, and while the results are somewhat mixed, HART and director Norma Hill are to be congratulated on presenting an entertaining evening of show business nostalgia.


“Gracie for President” is a play based on legendary comedienne Gracie Allen’s tongue-in-cheek campaign for President in 1940. The entire production is staged as a Burns and Allen comedy, using a marvelously authentic set as it might have been used in one of George and Gracie’s television shows. As in the Burns and Allen Show, all of the actors remain in character throughout, except for George Burns (Paul Roder), who regularly breaks the “fourth wall” by addressing his audience.


In the five person cast, Roder’s outstanding portrayal of straight man George Burns really provides the glue that holds the production together. He clearly did his homework, as he captures Burns’ body language, timing, and delivery using the ever-present cigar to punctuate his wry performance. Particularly compelling are the scenes where he retreats silently to the sidelines, using only his facial expressions (and, of course, his cigar) to comment on the absurdity of his fellow actors.  As intended, the audience’s eyes are drawn away from center stage even as their ears follow the plot through the dialogue of the other characters. 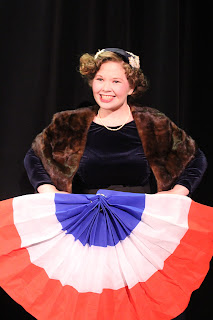 Maille O’Brien, while less successful in capturing the essence of Gracie Allen’s dizzy persona, is nevertheless charmingly funny – audience members familiar with the character of Kitty Forman (“That ‘70s Show”) will recognize her comic style. She is particularly adept when delivering some of the show’s trickiest tongue-twisters, which she does with admirable precision.


The other three cast members have much less stage time but each carries multiple roles. Brick Andrews (Bill Goodwin/Reporter) is convincingly slick and unctuous as the Burns and Allen Show’s announcer and pitchman – and almost as unlikely a candidate for ’s Most Glamorous Man as Burns himself.  Becky Downs (Blanche Morton/Reporter/Saleswoman) has her finest moments as the terrified novice saleswoman, forced to mechanically repeat her entire pitch every time she is interrupted. Tony Smith’s blustering delivery as Harry Morton and a salesman and his comic British accent as a reporter call upon his versatility as an actor as he rounds out the small cast.


One of the great things about community theater is its ability to draw upon a specialized locale to personalize the show for its audience.  Playwright/Director Norma Hill, like Burns and Allen in their vaudeville days, incorporates local references to achieve this end. In the best early television tradition, co-sponsor Bunny Girt (who will always live in our memories as “Bunny Girt, State Farm Insurance Agent”) comes in for some delightful ribbing and scandalously over the-top promotion on several occasions – generating some of the show’s biggest laughs.


Productions like “Gracie for President” keep the memories of early show business greats alive, and introduce these classic characters to new generations of audiences. Thank you to the HART Theatre for doing its part in this noble endeavor!

“Gracie for President” runs through September 23d at the HART Theatre, . 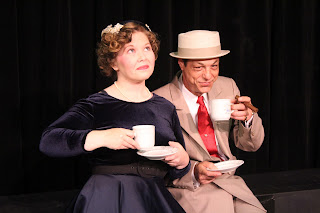 Posted by Westside Theatre Reviews at 8:31 AM No comments: