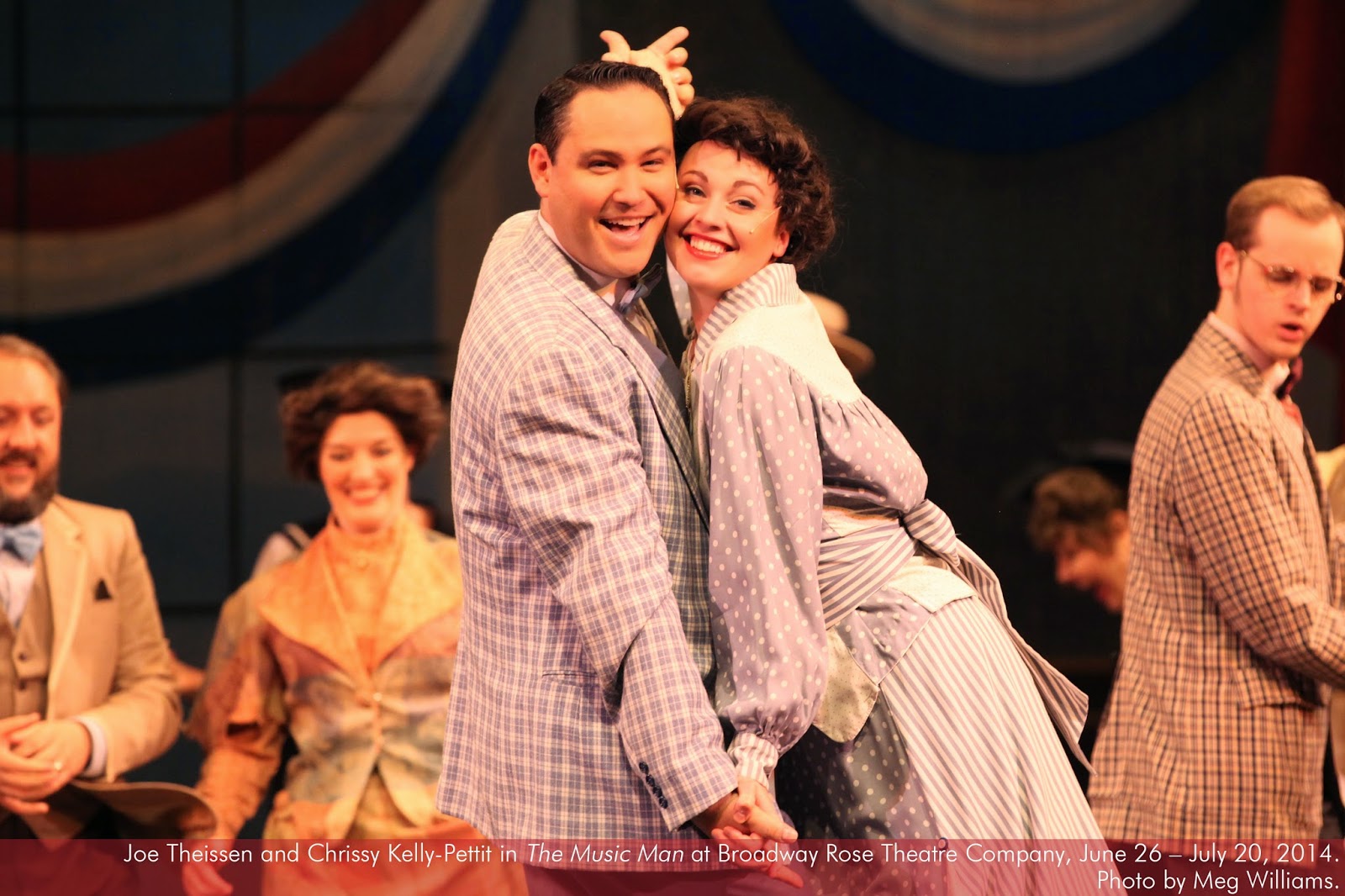 Back in 1996, a Southern California paper dismissed a fine production of The Music Man (in which Darrell played a role) as “serviceable theater” but averred that “it’s time to put it away…there’s nothing more to be added, nothing new to say” about this venerable classic. As Broadway Rose’s current production clearly demonstrates, the reviewer could not have more thoroughly missed the point of live theater. A classic movie like Casablanca or Raiders of the Lost Ark can be revisited at will in the privacy of your own home, and on occasion even at a big screen revival, but the only way to keep a great theatrical piece alive is to continually (re-) produce it.


That said, Broadway Rose is by no means merely delivering “serviceable theater” with “nothing new to say.” From the moment the curtain opens on the hypnotic light of a massive train engine until the last chaotic, dissonant notes of the River City Boys Band, the audience is transported to a vital, living, 1912 vision of small-town Americana. Over 50 years ago, author Meredith Willson froze this magic moment from his childhood with cryogenic precision. Director/choreographer Peggy Taphorn not only brings it back to life, she gives it new life, assisted by her amazing 40-person cast and music director Alan D. Lytle’s stunning orchestra (including, as is appropriate in a paean to marching bands, three trumpets, a trombone, four wood wind players, and a drummer). 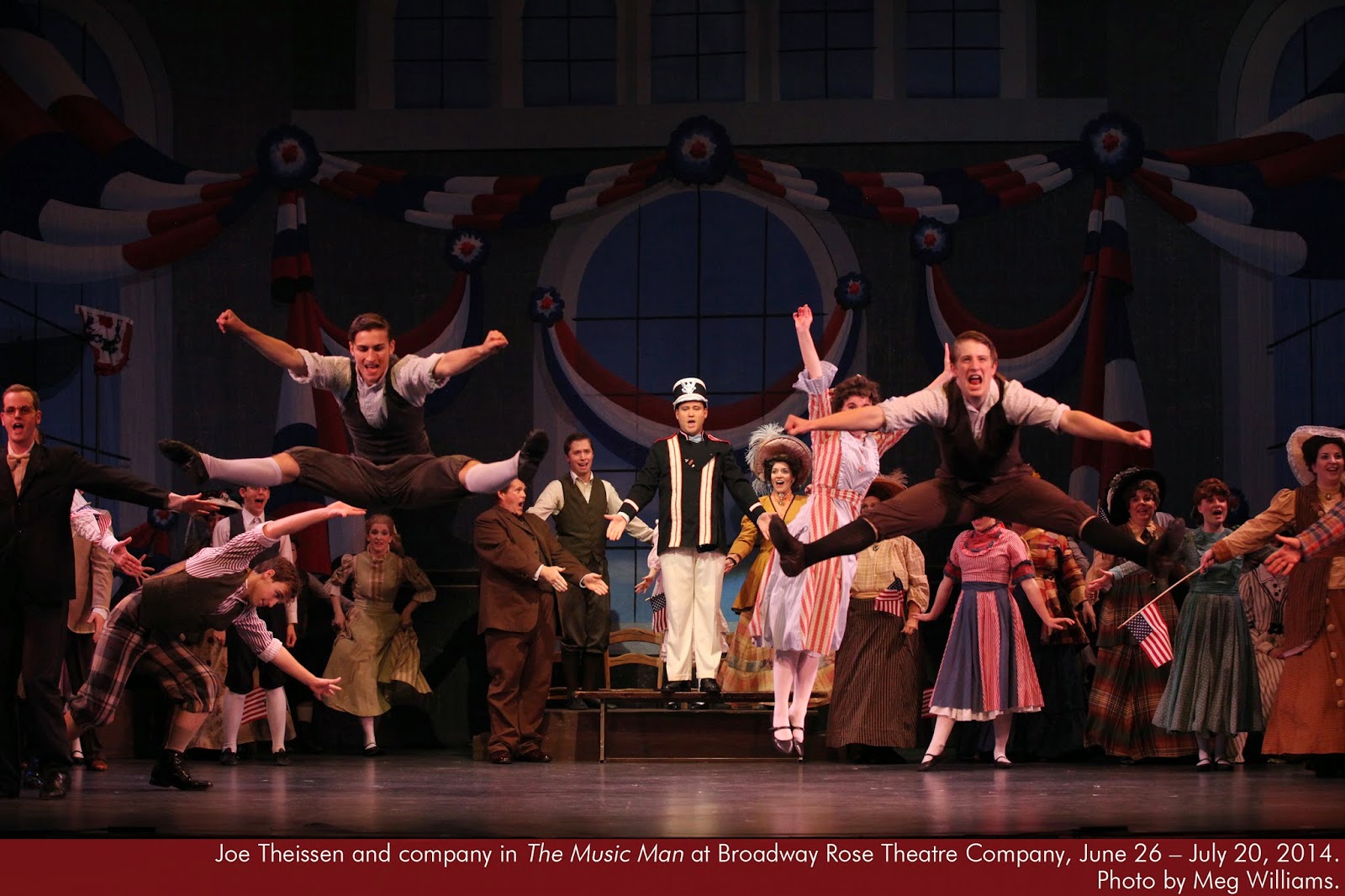 The part of Harold Hill is often filled by actors who are adept at delivering the fast-talking, tongue-twisting “Ya Got Trouble” – but Joe Thiessen’s beautiful baritone brings a new dimension to the character; his sensitive delivery of “Till There Was You” makes his transformation from harsh and lecherous huckster to helpless romantic utterly believable. The audience can really buy that this particular Harold Hill gets his foot caught in the door. “The door,” of course, is the captivating Marian Paroo, played by Chrissy Kelly-Pettit. Just as some Harolds can’t sing, some Marians can’t act, but Kelly-Pettit’s singing and acting are in perfect alignment – lovely and powerful, with none of the quavering vulnerability sometimes associated with the role.


“Best Supporting Actor” level performances are delivered by Norman Wilson as Marcellus Washburn and Annie Kaiser as Mrs. Paroo. Both bring more to their respective roles than we have ever seen in a regional production. Wilson is a true triple-threat: a great tenor voice augmented by flawless comedic and terpsichorean timing. Speaking of timing, Kaiser’s Widow Paroo earns laughs in places usually missed – she certainly understands and exploits the power of the pregnant pause. Makenna Markman (“Amaryllis”) and Brandon B. Weaver (“Charlie Cowell”) make the most of their relatively minor roles without overacting. Weaver lifts his character from cartoonish villain to a more rounded and human adversary, motivated at least in part by sincere concern for the victims of Hill’s spellbinding flimflammery. Markman’s pretty voice complements her poignant and unrequited puppy love. 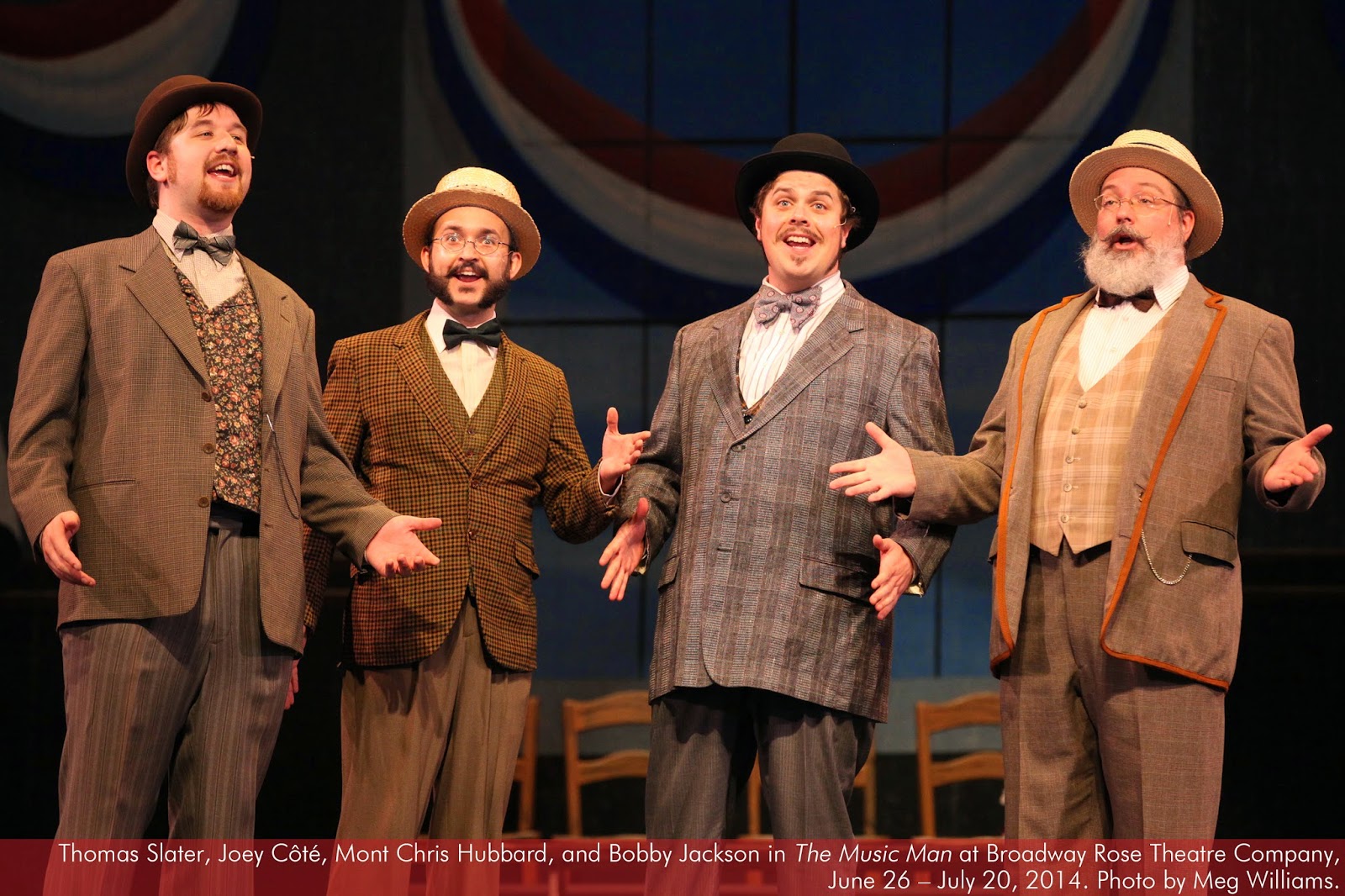 The teen ensemble, particularly in “Marian the Librarian” and “Shipoopi,” is imaginatively choreographed and the dancing is delivered with adolescent enthusiasm tempered by near-gymnastic precision. The vocal ensemble is consistently exciting, and the barbershop quartet is an audience pleaser from the earliest tentative notes of “Ice Cream” through the lovely counterpoint of “Lida Rose” and “Will I Ever Tell You.”


As the standing ovation from a huge crowd at the Deb Fennel Auditorium attests, The Music Man will never go out of style for musical theater lovers – especially when given the superb treatment it receives from Broadway Rose. The Music Man is playing at Tigard High School’s Deb Fennell Auditorium through Sunday, July 20th.
Posted by Westside Theatre Reviews at 9:52 PM No comments:

All Roads Should Lead to Leading Ladies

By Tina Arth and Darrell Baker
Despite what our cousins across the pond seem to believe, men in drag are not necessarily funny. However, put a man in a dress at Theatre in the Grove and the result is inexplicably, inevitably hilarious. Very few mothers dream of seeing their only son cavorting around in high heels, poufy skirt, and tasteful blonde pageboy, but Director and proud mom Pruella Centers seems to delight in transforming son Zach into a winsome lass (at least on stage) in Theatre in the Grove’s current production of Ken Ludwig’s Leading Ladies.


Struggling Shakespearean actors Leo and Jack, after a catastrophic performance at a nearby Moose Lodge, end up broke on a train to York, PA. Leo has a plan – they will impersonate missing English heirs Max and Steve and inherit $2,000,000 from their recently deceased “Aunt” Florence. However, they learn from roller-skating waitress-in-training Audrey that Max and Steve are actually sisters Maxine and Stephanie. Undaunted, Leo persuades Jack to join him in raiding their costume box – so they arrive at Aunt Florence’s estate attired as Cleopatra and Titania (wings and all) to claim the loot. Rumors of Aunt Florence’s demise prove premature – despite having been declared dead (twice!) by an exceptionally incompetent physician, she lingers on quite hardily through two acts of genuinely funny farce.


Jeanine Stassens brings a crusty wit to the role of Aunt Florence, and the scene where she pretends to die just to mess with her physician gets one of the biggest laughs of the evening. Fred Sherrill’s blustering, greedy, lascivious portrayal of Doc makes him her perfect foil. Doc’s son Butch (Evan Tait) is even more witless (but much more likeable) than his father – Tait’s portrayal evokes the part of the hapless “Chris” on Family Guy. When forced to play in a Shakespeare scene, Tait’s character’s stage fright and rushed lines earn him several big laughs.


As Aunt Florence’s third niece, ingénue “Meg,” Dusti Arab makes the most of the relatively the thankless role of straight man. Arab is cute and spunky, and shows a lot of grit when standing up to her hypocritical fiancé, the minister Duncan (Dan Harry). Harry’s performance is superbly self-righteous – a classic male chauvinist in clerical clothing, played with admirable restraint. Jeananne Kelsey as the roller-skating waitress “Audrey” is a delight, drawing on her considerable comedic skills to create a thoroughly loveable ditz.


The cross-dressing duo (Alex Johnston as Leo/Maxine and Zachary Centers as (Jack/Stephanie) dominates the production from start to finish. Alex’s confident conman is Oliver Hardy to Zach’s timid Stan Laurel – and comparisons to funny men Zero Mostel and Gene Wilder would not be out of line. The pair’s comic mastery is not just a function of costume; in or out of drag these guys are astonishing comedians, and director Pruella Centers makes the most of their talent.


We cannot fail to mention the gorgeous set, brought to us by some fine carpenters and the fertile mind of multi-talented set designer Zachary Centers. The remarkable period costumes (1950’s and Elizabethan) are brought by (wait for it) Pruella and Zachary Centers.


The show runs for two more weekends. Do yourself a favor, trek out to Forest Grove, and catch this gem while you can.


Leading Ladies is playing at Theatre in the Grove, 2128 Pacific Avenue, Forest Grove through Sunday, June 22nd with Friday and Saturday performances at 7:30 pm and Sunday matinees at 2:30 pm.
Posted by Westside Theatre Reviews at 2:37 PM No comments: 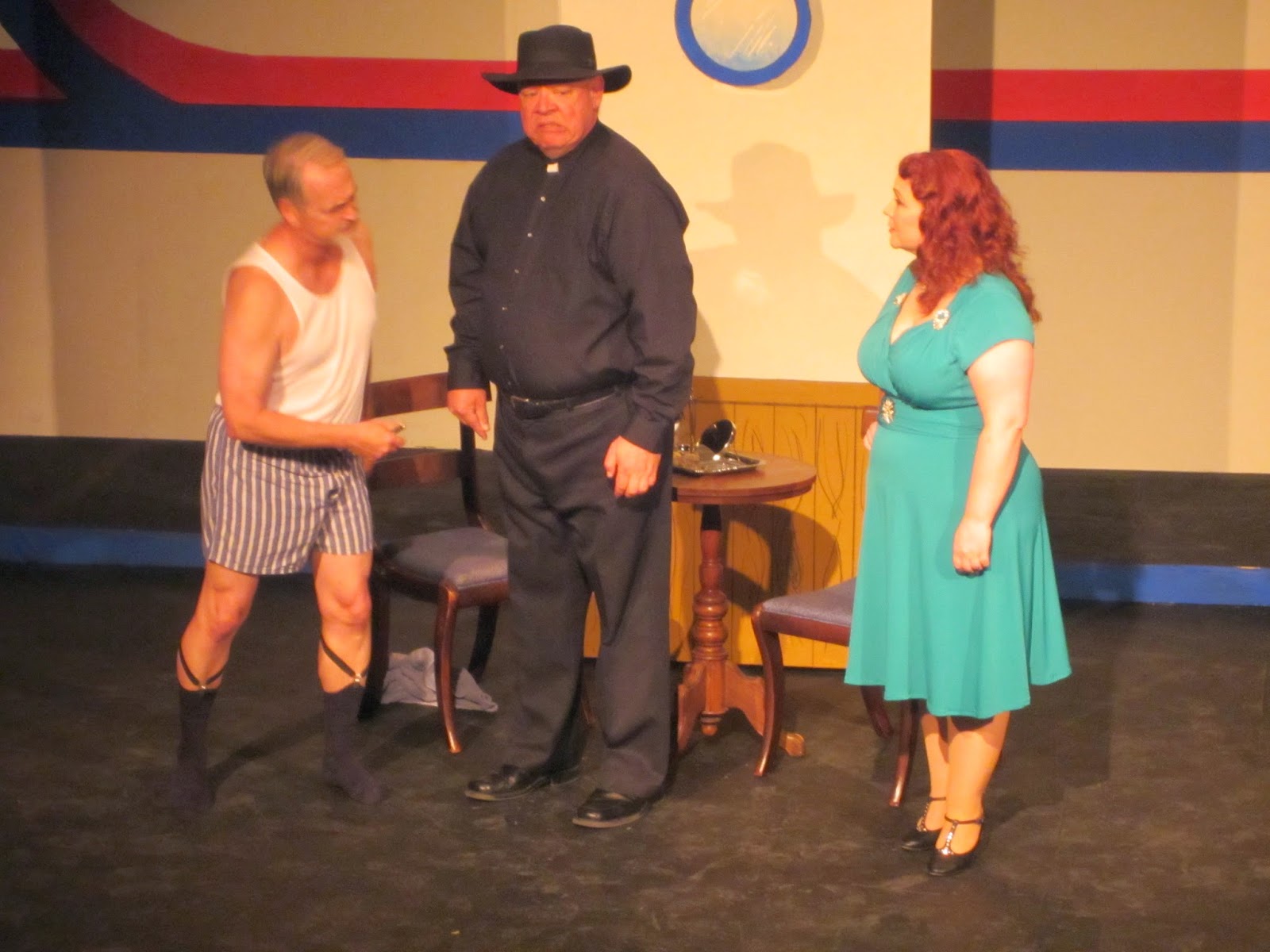 
Cole Porter’s classic musical comedy Anything Goes has survived a number of dramatic sea changes since it made its Broadway debut in 1934. Sings have been added, deleted, and reassigned, characters renamed, and plotlines modified, keeping the show remarkably fresh as it enters its 80th year. Director Tony Bump’s current adaptation at Hillsboro’s HART Theatre fully exploits the license granted by this tradition, and the result is a lean, clever, fast-paced show that thoroughly entertains its 2014 audience.


Young Wall Street broker Billy Crocker comes aboard the S.S. American to deliver a passport to his boss. Billy encounters the lovely Hope Harcourt, for whom he has pined ever since they spent 9 (or was it 12?) hours in a hansom cab months earlier. Discovering that Hope is en route to England to marry stuffy British nobleman Sir Evelyn Oakleigh, Billy opts to stow away and disrupt the wedding plans. Gangster on the lam Moonface Martin takes Billy under his wing, and over the course of two acts, 18 musical numbers, countless disguises, sight gags, and cheap jokes Billy wins Hope’s hand. The plot is tied up nicely when Sir Evelyn marries alluring nightclub performer Reno Sweeney, Hope’s mother finds true love with Billy’s boss, and Moonface Martin is declared harmless by the FBI. 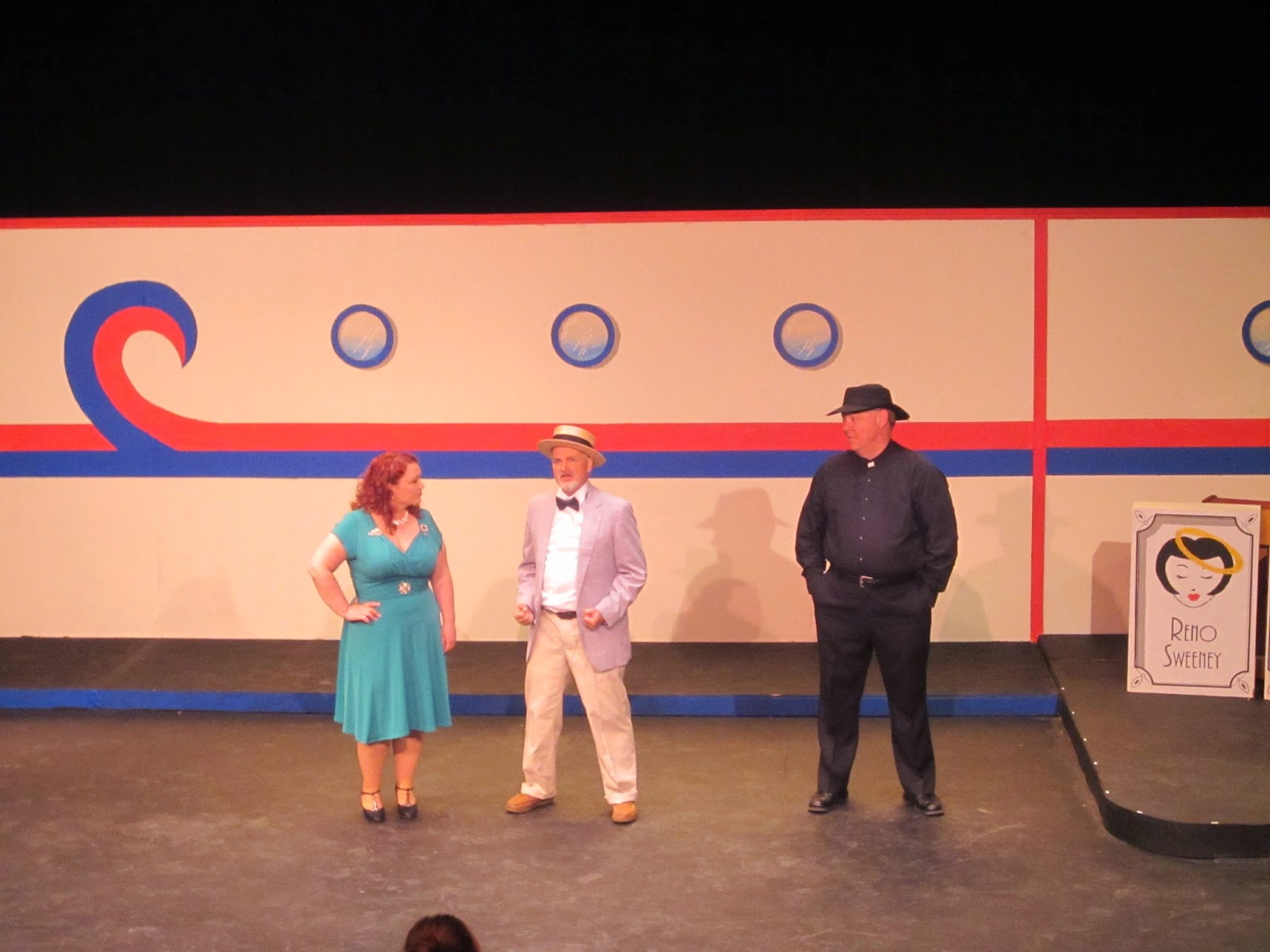 Andy Roberts (“Billy Crocker”) and Rachel Thomas (“Hope Harcourt”) make a cute and believable couple. Thomas shifts fluidly from starry-eyed infatuation to dignified petulance, while Roberts brings a playful insouciance to his pathetically obvious disguises. Their mastery of the tricky lyrics and meter of “It’s Delovely” make this lighthearted number one of the show’s highlights.
Dorinda Toner (“Reno Sweeney”) makes the most of a role originally defined by the great Ethel Merman. She is brassy, brash, and bubbly – a real belter with a great voice. In solos and backed by her “Angels” (a lovable quartet of slightly used, tap-dancing showgirls) she enthusiastically delivers the show’s liveliest numbers.


Steve Pitzel (“Sir Evelyn Oakleigh”) uses his extensive entertainment background to mine every possible nuance of what can be (but isn’t always) a great comic role. His timing, dry delivery, and exceptionally mobile eyes ensure that many of the show’s funniest situations get the laughs they deserve.


Anything Goes’ secret weapon is Stan Yeend as the machine gun totin’ Public Enemy #13, Moonface Martin. From his first moment on stage, Yeend holds the audience in thrall as he casually cavorts through an endless series of one-liners mixed with physical comedy. He is ably assisted by Megan Bronleewe as his sidekick, “Bonnie,” who gives a particularly funny twist to her delivery of “Heaven Hop.”


The show requires a strong ensemble for many of the big song and dance numbers; despite some problems with accompaniment director Bump’s cast is equal to the task. Audiences looking for a good old-fashioned musical with lots of laughs, lively tap dancing, and appealing songs will definitely enjoy the production.


Posted by Westside Theatre Reviews at 10:32 AM No comments: