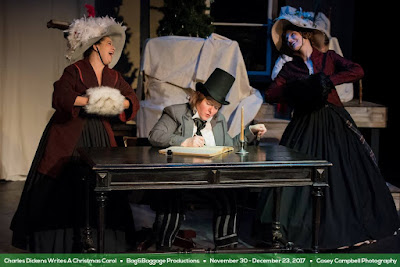 
For Christmas 2017, Bag & Baggage is reprising their 2010 staging of a show described as “the most successful production in B&B’s history…” – and it is a sure-fire smash in their new location. Artistic Director Scott Palmer’s original script, Charles Dickens Write A Christmas Carol, uses seven actors to imagine and portray Dickens’ creative process as he writes what may well be the greatest Christmas story every told (with the possible exception of the Bible itself, and even that’s not certain!).  In the intimate space of The Vault the story is occasionally touching, frequently hilarious, and constantly engaging for the entire audience.

By filling multiple roles, the actors portray Dickens as well as all of the key characters who appear in A Christmas Carol. As Dickens imagines each character or scene, the actors assume the roles and play the characters evolving in his mind. Sound dry and convoluted? Heed this quote from Palmer’s Director’s Notes: “…Dickens’ unending energy, his boundless enthusiasm and his limitless creativity were only exceeded by his childish and broad sense of comedy!” It is this little-known side of Dickens’ personality that drives the tale, and anyone who knows Scott Palmer well will understand how well these qualities define both the play’s author and its subject. The witty, playful script in the hands of experienced B&B actors becomes a non-stop joy for the audience – something not to be missed. An added bonus is Palmer’s obvious respect for his patrons; many of the funniest touches are found in subtle, absurd throwaway lines shared with the audience as inside jokes, and the intimacy of The Vault ensures that everyone is fully included in these moments.

Most of the cast members play countless roles, constantly disappearing and reappearing with new hair, costumes, accents and attitudes as they shift from ghosts to turkey boys, laundresses to Mrs. Cratchit. The two exceptions are Kymberli Colbourne, who adds a special note of cynicism to the already jaded Ebenezer Scrooge, and Peter Schuyler’s powerhouse take on Dickens (although it is Schuyler’s brief turn as Tiny Tim that provides some of the funniest moments in an already laugh-laden evening).

The Vault offers little in the way of elaborate sets, and compensates with lots of state-of-the-art toys for those wonderful backstage geeks who conspire with our imaginations to deliver the necessary ambience. Jim Ricks-White (technical director/lighting designer) and Carlee Whalen (sound designer) make lavish use of these toys to create the sights and sounds of Victorian London, flying ghosts, and everything else needed to recreate the timeless characters who emerged from Dickens’ study and state of mind. Melissa Heller outdoes herself (no mean feat) with a plethora of elaborately detailed and accurate costumes.

Whether you are a diehard fan or someone who thinks they have seen quite enough of this particular holiday classic, you should make time for this fun and the fascinating new perspective on a tale we all know!
Charles Dickens Writes A Christmas Carol is playing at The Vault, 350 E. Main Street, Hillsboro, through December 23d, with 7:30 p.m. performances December 7-8-9-14-15-16-21-22-23 and 2:00 p.m. performances December 10 and 17. Matinee performances include a talkback with cast and director following the show.