Broadway Rose’s Latest Light Fun? This is Most Certainly True! 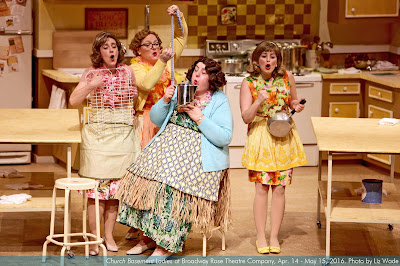 
Maybe someday the world will be ready for a wry but gentle musical about Islam, but for now we’ll have to settle for loving parodies of the foibles of Catholics, Protestants, and Jews. Broadway Rose’s current production of The Church Basement Ladies is a classic example of the genre – warm, nostalgic, cheerful, and utterly harmless. What it lacks in substance it makes up for in unabashed enthusiasm (expressed through the actors, musical direction, and set) for a time, place, and people who define our image of both the strength and kitschiness of traditional American religion (in this case, Garrison Keillor’s much-loved Minnesota Lutherans).

The show is set entirely in the basement kitchen of a 1960s era rural Lutheran church, and cast only with the pastor and four women who prepare the food for church special events and slowly learn to deal with large and small changes on the horizon as the decade unfolds. Whether it’s changing the color of the hymnals (just plain wrong), the pastor’s young new wife who offers vegetarian lasagna for a church dinner (gasp!), or the teen daughter who may be dating a Catholic (oh, the horror!) the basement ladies bear up bravely, if not silently, under the assaults on their sacred ways. Pastor Gunderson, Mavis, Vivian, Karin, and Karin’s daughter Signe sing and dance their way through Christmas dinner, a funeral, a Hawaiian-themed Easter fundraiser, and finally Signe’s wedding (thankfully, to Handsome Harry, not to the Catholic boy).

While the show is amusing, and evokes a nice warm glow of nostalgia (probably stronger for Lutherans), the songs are not terribly memorable and it’s thematically thin. However, none of this matters – it’s Broadway Rose, and the quality of the performances ensures that the audience is treated to a spectacular two-hour concert by five wonderful vocalists. The solos sparkle, but it’s the harmonies that make the evening – mostly smooth and rich, but with occasional flights of spine-tingling inventiveness.

Matthew Belles (Pastor Gunderson) is a solid singer and actor, but mostly takes a back seat to the ladies. However, the emotional (by Lutheran standards) scene where he writes a eulogy for the beloved Willie the handyman provides one of the show’s most touching moments. Lori Paschall (Vivian), Debbie Hunter (Karin), and Zoe Randol (Signe) bring bite and warmth to their intergenerational tension. Paschall plays the crusty and seemingly immovable traditionalist to the hilt in her paranoid “The Cities,” but like Belles she gets a real moment in the scene where Vivian comforts Signe, the terrified bride to be. Paschall’s role as the aging, self-appointed doyenne of the synod might have been clearer if she had worn a white wig – it was not immediately obvious that she was supposed to be much older than the other women. Debbie Hunter (Karin) displays a nice combination of subservience and spunk as she wrestles with Paschall for a voice in the management of the kitchen, and it is Hunter’s voice that really sells some of the otherwise forgettable songs. Zoe Randol (Signe) has inherited her “mother’s” backbone – she is calm but firm as she stands up for her bold decisions to associate with a Catholic, go to college in the sin-rife Twin Cities, and listen to the Beatles.  Her ultimate marriage to a nice local (Lutheran) boy is a bit of a disappointment for the rebel in me, but she offers some stunning harmonies and displays the best dance moves in the cast, so I forgive her for that one lapse.

I first saw Kymberli Colbourne a few months ago playing Captain Ahab in Moby Dick, Rehearsed. Nothing in that impressive performance prepared me for Mavis – the ultimate farmwife with a sunny disposition, ready to tackle any challenge without complaint. Colbourne’s fine-tuned and fearless grasp of physical comedy makes her hot-flashes (first seen in the truly funny “My Own Personal Island”) a motif as powerful and oft repeated as the great Lutheran cliché, “This is most certainly true.” Whether she’s opening a stuck door, cooling herself in the freezer, or clambering to open a window in sub-zero temperatures Colbourne puts it all out there, and it works.

The sixth “cast” member is the set itself – a detailed, fully equipped room with great props, it captures every detail of a church kitchen.  In this show, butter holds a place of singular honor, each apron carries its own subtle message, and the knives, pans, tables and appliances almost come to life as they interact with the human cast (especially the dancing butter rolls).

Last, but not least, music director/keyboard player Jeffrey Childs is the unseen hero of the show.  He has molded a talented cast into a finely tuned and sometimes exciting vocal ensemble, and the music from his single keyboard is so full that my companion had to point out to me that he was working alone.

“Church Basement Ladies” is playing at the Broadway Rose New Stage Theater, 12850 SW Grant Avenue, Tigard through Sunday, May 15th with performances at 7:30 pm on Thursday, Friday and Saturday and 2:00 pm matinees on Saturday and Sunday. An additional performance will be held at 7:30 pm on Wednesday, May 11.
Posted by Westside Theatre Reviews at 3:55 PM