Broadway Rose’s Momentous Into the Woods 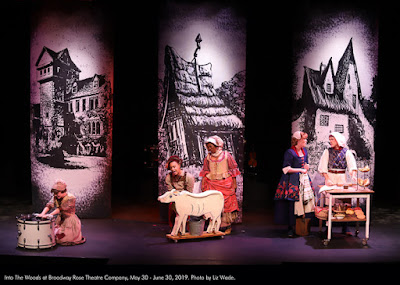 
As an unabashed fan of Stephen Sondheim, Broadway Rose, and Into the Woods it was no surprise to me that I absolutely loved the company’s opening night show last Friday. I expected no less, and was confident that the necessity of using the company’s relatively intimate New Stage would not diminish my enjoyment of a show often presented on larger stages, with more elaborate sets and a full orchestra. What I did not expect was that the show would actually be enhanced by the limited space and the consequent staging limitations.  Music director/pianist Eric Nordin partners with director/choreographer Jessica Wallenfels to present a one-piano arrangement of the score combined with pacing and choreography that leave Sondheim’s music and lyrics intact but allow James Lapine’s brilliant book to shine more brightly than I thought possible.

The trick? Obviously, casting is one key, and Wallenfels’ cast is superb. The stage is packed with vocalists fully capable of bringing the songs to life, but who also deliver both the broad physical comedy and serious moments that define Into the Woods’ innovative mixture of mirth and message.  I noticed in the program that Wallenfels shares choreography credit with the cast, and I love that she acknowledges that the final product is the result of a true collaboration. What else do I love? More than anything, the decision to frame the show as updated commedia dell’arte – a traveling troupe would not have elaborate sets or an orchestra, but they would have exaggerated emotional expression, elaborate costumes, and a Jack/Jill of all trades attitude, with the actors tackling not only multiple acting roles but also helping out wherever needed. At Broadway Rose, this flexibility is shown in the cast’s role as auxiliary musicians, incorporating percussion accents into the story, tossing in a kazoo solo, and (most brilliantly, in my opinion) seamlessly taking over the keyboard while Nordin takes his bow.

The show follows the story of the Baker and his wife, childless because of a multi-generational curse from the hideously ugly witch next door.  Their quest for a child brings them in contact with characters from Little Red Riding Hood, Jack and the Beanstalk, Cinderella, and Rapunzel (with a brief nod to Sleeping Beauty and Snow White). The first act follows (loosely) the three fairy tales through their happy resolutions, while the Baker and his wife get their child and the witch is restored to her former beauty, all wishes are fulfilled, and the act closes with the oh-so-happy “Ever After.” Act II explores the darker themes behind the stories (e.g., stealing is still stealing, even if it’s from a giant; killing is still killing, even it it’s a wolf), ultimately cautioning us to be careful about the things we wish for and say in the finale, “Children Will Listen.”

As there was nothing, in my opinion, not to love, I’ll skip the usual praise for the cast and instead offer up a few of my favorite “moments in the woods.” Moment #1: Erin Tamblyn’s Witch – when she sang “Stay With Me” I not only got chills, but I found myself wondering how humans had ever evolved to be able to make such magnificent music with their voices. Moments #2 & 3: Austin Comfort and Adam Elliott Davis (the two princes) going WAY over the top in both “Agony” and its reprise – and simply nailing the vocal and physical aspects with breathtaking energy. Moment #4: Hannah Sapitan as Little Red Riding Hood – how do I pick? When pressed, I’ll take her fearless delivery of “I Know Things Now.” But then there’s the fabulous moment when Comfort and Leah Yorkston (the Baker’s Wife) roll across the stage as they disentangle, Tyler Andrew Jones’ (Jack’s) poignant parting moment with Milky White, Eric Michael Little (The Baker) as he accepts his wife as a partner in “It Takes Two,” and Milky White’s explosive resurrection. My advice? Go see the show yourself (if you can get tickets – there aren’t many left!) and choose your own moments.  I may have to go back and choose a few more for myself.

Into the Woods is playing at Broadway Rose’s New Stage, 12850 SW Grant Avenue, Tigard through Sunday, June 30th 28th.
Posted by Westside Theatre Reviews at 9:31 AM