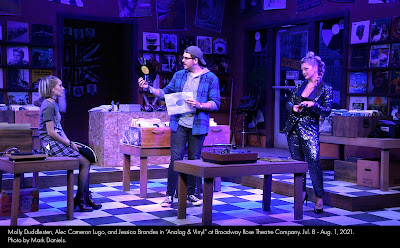 Maybe by next fall I’ll be able to see a show without exulting over the return of live theater, but I’m not there yet!  Watching Analog & Vinyl at Broadway Rose last week was thrilling, and the standing ovation from the deliberately small, fully masked audience was definitely a tribute to more than just the performers.  Paul Gordon and Michael Berresse’s quirky little rock-themed romance had its world premiere in 2014, and seems to have flown largely under the radar since – but in the skillful hands of Director Sharon Maroney and Musical Director Jeffrey Childs, Broadway Rose goes a long way toward righting this injustice with their beautifully crafted and utterly charming production.

Analog & Vinyl is in many ways a simple show – only three cast members plus a handful of live musicians, no intermission, and a single set that can be adorned with heart-warming fidelity by raiding the stash of hordes of album-hoarding boomers.  The story is set in modern times, but is firmly rooted in the past and provides a series of sometimes humorous, often though-provoking intersections between the 1960s and the 2010s. Harrison is a seriously out-of-touch young man trying to save his record store, which is home to countless vintage vinyl albums. Rodeo Girl is a Los Angeles hipster wannabe who has attached herself to the store in a desperate attempt to catch Harrison’s eye – he lets her hang around his virtually customer-free shop to help out, but frequently has to remind her that she is not actually an employee. As Harrison teeters on the brink of eviction, “The Stranger” appears – a flashy, sophisticated, sardonic woman offering salvation (and who is almost immediately revealed as being one of Satan’s more attractive and unusual incarnations). Will Harrison sell his soul to save the shop? Will Rodeo Girl embrace the dark side to find true love?  These questions can be resolved by going to see the show (or, starting July 16th, watching the streaming filmed version).

Alec Cameron Lugo (“Harrison”) and Molly Duddlesten (“Rodeo Girl”) are an ideally mismatched couple of misfits. Lugo is completely believable as an anxiously nerdy, computer-shunning Luddite who is emotionally (and technologically) stranded in a time before his birth, and Duddlesten’s sometimes frenetically hip, sometimes plaintive energy provides just the right contrast as she flits around the shop (sometimes, inexplicably, on a scooter!).  The original music reflects sixties soft rock, harder rock, and rock ballad styles, and Lugo and Duddlesten’s voices are well suited to the material.

Analog & Vinyl could easily have been just another derivative, Nora Ephron-style rom-com were it not for the riveting presence of Broadway Rose newcomer Jessica Brandes (“The Stranger’). Whether she is singing, striding, or smirking she commands 100% of the audience’s focus every time she appears on stage, and she never wastes a moment or move – she struck me as one of those actors who could hold my attention while reading the phone book. Kudos to the Broadway Rose folks who were smart enough to cast her!

At least for me, Robert Vaughn’s set design was a heart-warming trip to memory lane – the album covers and posters are not only eye-catching, but also thematically appropriate as they remind older audience members of the power of iconic album art. Allison Dawe’s costuming is appropriately schlubby for Harrison, hip for Rodeo Girl, and va-va-voom sparkly for The Stranger – like the show itself, a nice mix of past, present and surreal.

Given the limited space on stage, it is understandable that the band is kept offstage. That said, I would love to have been able to watch keyboardist/conductor Childs, guitarist Eric Toner, bass player Amy Roesler, and drummer Alex Geffel rock out on the show’s 19 musical numbers.

If you are comfortable going back into a theater, Broadway Rose is definitely the place to start – in addition to the 100% masked performance I saw, they also offer “proof of vaccination” shows as well as less restrictive options. Starting Friday, July 16th they will also be offering a filmed version of the show for the theater-hesitant, so musical theater lovers have lots of choices. Check out the website and pick the format that works best for you! Warning – due to mature themes and language, the show may not be appropriate for younger audiences.