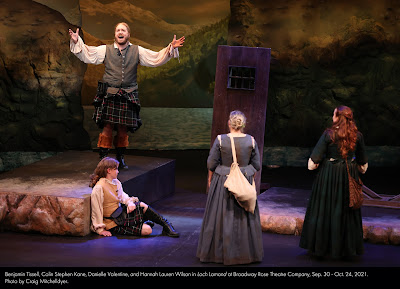 I am not, in general, a big crier – it takes a lot to loosen my tear ducts. That said, every once in a while a show just grabs my heart - somewhere between lights up and final bows I become something of a mess. However, Broadway Rose’s current production, the world premiere of Loch Lomond by Maggie Herskowitz (book and lyrics) and Neal Douglas Reilly (music), established a new record – one look at Alex Meyer’s set, a romanticized vision of the famous loch and surrounding Trossachs, was all it took to send me burrowing into my purse in search of a tissue. The set was only the beginning of a truly magical evening – if you are thinking it’s time for live theater again, this is a show you just cannot miss.

While Loch Lomond is set during Scotland’s Jacobite uprising of 1745, it is not a story of glorious battles, but of four flawed people revealing their weaknesses and finding their strengths in a tragic time. Almost all of the action takes place in two locales - the prison cell where brothers Lyle and James are being held after their capture by English forces, and the farmhouse, fields, and hills near Loch Lomond where Lyle’s wife Elspeth and James’s lover Ailey ultimately wait to learn the fates of the men.  Lyle has made two contradictory promises – one to remain with Elspeth, the other to watch out for James when he goes to join the rebellion. The jailers have told the brothers that both will be executed in the morning, and through 17 songs and a series of flashbacks their stories, and the stories of the women they left behind, are revealed.

The characters each carry a huge load, but if the show has a star it’s Benjamin Tissell (Lyle). I’ve seen Tissell in two previous Broadway Rose productions, but had no idea of his prowess as a vocalist and an actor until he threw his larger-than-life persona into  “Six Hours” (a duet with Colin Stephen Kane, playing James). From there on, his performance never lets up, even as he gradually cedes some of the power of his alpha male position to his younger brother.  Kane kind of sneaks up on you – he seems broken, maybe even a bit whiny at the start, his vocals spot-on but never dominant. I was stunned at his ability to transform himself – just moments after his first scene in prison, he appears as the playful adolescent with sparkling eyes, more than willing to enjoy Ailey’s libidinous advances – but by the end of the play, he has reshaped himself into a man right before our eyes.

The women of Loch Lomond take a back seat to no one. Danielle Valentine (Elspeth) is the epitome of a stalwart Highland lass. Using a voice as powerful as Tissell’s, she illustrates her ability to accept life’s hardest challenges with clear-eyed wisdom (“The Man I Married” and “Time Makes Liars Of Us”) but able to lose herself in her love for Lyle (“Beautiful Things”). Finally, there’s Hannah Lauren Wilson (Ailey), who creates an irresistibly witchy little misfit immersed in a world of Selkies and other Celtic myths. Wilson is everything Ailey should be, with her bright red hair and those laughing eyes that hide an insecure and damaged young girl who taps an inner core of strength and empathy as the play progresses. She is a strong vocal partner throughout, but really shines in her solo number, “Running Through The Raindrops.”

Directing a world premiere presents a universe of challenges, but Isaac Lamb makes it look easy. He comes down on the side of consistently mild Scottish accents without even a hint of parody, and his actors are true to that vision. The set design is brilliantly understated, leaving the glory for the sculpted mountains and captivating loch of the backdrop, and the few multi-purpose set pieces move so fluidly that virtually no time is lost to set changes. Kimberly Hergert’s costume design threw me at first – then I remembered that she was recreating a not a contemporary kilt but its ancestor, the flowing yards of tartan that once provided a Highlander’s clothing, shawl, and shelter with an elaborate system of tucks and folds.

Music director/conductor/keyboardist Benjamin Quintel and his tiny band (Marc Grafe on reeds, Amy Roesler on strings, Zachary Stowell on Drums and Eric Toner on guitar) create the feel of traditional Scottish music as a backdrop and accent to the show’s original songs, and the closing vocal quartet for “Loch Lomond” ensures that any dry eyes left in the house will be coated with a fine highland mist. Loch Lomond is a genuinely beautiful new play that should become a musical theater standard, and any future productions now have a lot to live up to.

NOTE: Per Oregon’s indoor mask requirement, all guests and staff must wear a mask in the theater. In addition, Broadway Rose is requiring proof of full COVID-19 vaccination OR proof of a negative COVID-19 test within 72 hours of the performance for anyone not vaccinated, including children under the age of 12 and those who are unvaccinated due to medical condition or religious belief. Proof of vaccination or negative COVID-19 test along with photo identification will be checked at the door prior to entry.