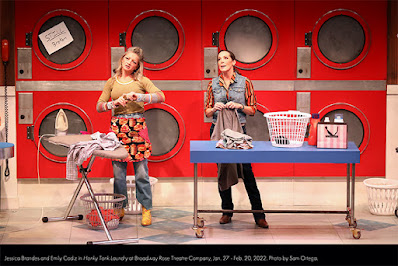 Broadway Rose Theatre Company’s audiences are thoroughly familiar with the conventions of the “jukebox musical” – a show built around a whole passel of songs, mostly (or completely) drawn from pre-existing pop charts. The story lines tend to be a mite slim and predictable, so the show’s entertainment value is almost exclusively dependent on the quality of the vocalists, musicians, and songs. Nowhere is this more clearly illustrated than in director Sharon Maroney’s current love offering of Roger Bean’s Honky Tonk Laundry – the plot is paper- thin, but this tissue paper provides the exquisite giftwrap around two acts and 22 numbers delivered by two of the finest vocalists you’ve heard in a month of Sundays.

Here goes: the show opens with hard-headed, warm-hearted down-home gal Lana Mae Hopkins bubbling over with frustration - instead of a life singing her heart out on the country circuit, she has settled for running the Wishy Washy Washateria in an unnamed but stereotypical small southern burg. She’s got a load of the town slut’s scanty panties to wash, her husband Earl is spending WAY too much time visiting his “sick mother” instead of fixing a broken dryer, and her lone employee has disappeared. Just after she posts a help wanted sign on the door, in walks Katie Lane Murphy, a high-energy, high-maintenance train wreck of a woman done wrong who should never be trusted with a hot iron. Mollified by a few of Lana Mae’s sedatives, Katie quits her job and joins forces with Lana, and the two of them set out to dump their cheatin’ menfolk.  Turns out that Katie Lane has a powerful set of pipes, too – but without a little Xanax lubrication she’s way too anxious to sing in front of people. Next step? Put up some posters, redecorate the Wishy Washy as the Honky Tonk Laundry, and put on a show! Yep, that pretty much sums it up.

Even with spectacular vocals (and the vocals are pretty damned spectacular), the show would still be a bit of a drag if the actors didn’t bring their “A” game – but this is simply not an issue in the Broadway Rose production. When I first reviewed Jessica Brandes in last season’s Analog and Vinyl, I meant it when I said, “she struck me as one of those actors who could hold my attention while reading the phone book.”  She is beyond hilarious in her oddly sexy, jerky, quirky, sometimes drugged out and always passionate portrayal of Katie, and her powerful voice lights up the theater in six solo and seven duets of some great honky tonk classics (some of them new to me, but probably not to real country music fans).  Watch and listen especially for “Why’d He Come In Here Lookin’ Like That?” and “Cleopatra, Queen of Denial,” and brace yourself for the moment when Lana Mae teaches her to yodel in “Yodeling at the Grand Ole Opry.”

Emily Cadiz (Lana Mae) is in a comparatively straight role, but her enthusiastic cynicism and frequent (but inoffensive) swearing gives her lots of room to develop a funny and memorable spitfire of a character, and she doesn’t miss a beat. Cadiz’ “Stand By Your Man” alone is worth the price of admission, and her plaintive “I Need A Vacation” kicks the show off with a big, big bang. I’ve never been a huge fan of Nancy Sinatra, but Emily and Jessica’s duet on “These Boots Are Made For Walkin’” at the end of the first act made me wish there were no intermission!

While we never get to see the musicians, we definitely hear them. Music Director/conductor/pianist Max Kastelic with his band (Amy Roesler, Dave Muldoon, and Joseph Mammarella) provide everything you could want in a country combo – and then some. Sean O’Skea’s set is a picture perfect recreation of a tacky Laundromat, and Kimberly Hergert’s costumes tell us all we need to know about Lana Mae and Katie’s fashion ethos – lots of fringe, lots of boots, cowboy hats and (for Katie) some stunningly skin-tight, cleavage baring wardrobe choices.

Don’t come to Honky Tonk Laundry for anything deep or profound – life in February is dark enough on the outside that a couple of hours of comedy, nostalgia, and dynamite singing are exactly what we need. Do come for the highest quality of sheer entertainment you’ll find anywhere in town!