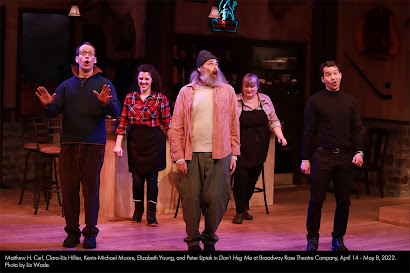 I don’t know how the rest of y’all are faring, but the last few years have offered me more tough moments than were strictly necessary. I am thus abnormally grateful for anything that makes me laugh, and Broadway Rose’s current production of playwright Phil Olson’s Don’t Hug Me (music by Paul Olson) has earned my eternal gratitude and then some. Yes, it’s absurd – a fact openly embraced by director Dan Murphy, who admits that he “thought it was one of the silliest shows I’d ever encountered.” Aside from the always-strong Broadway Rose production standards, the show’s salvation comes from that fine line between “silly” (it most certainly is) and “stupid” (it most certainly is not!). The dialogue and songs are delivered with 100% fidelity to a dense Minnesota/Scandinavian accent, and Olson has peppered the script with scores of increasingly bizarre regional epithets that keep the audience in stitches.

A brief synopsis: it’s the coldest day of the year in Ely, Minnesota, with a fierce storm blowing outside Gunner and Clara Olson’s struggling little bar, The Bunyan. Sick of the cold, Gunner wants to sell the bar and move to Florida, but Clara is unwilling to give up her love of ice fishing and her past glory as Winter Carnival Bunyan Queen. Waitress Bernice Lundstrom wants to pursue a singing career, but her fiancé Kanute Gunderson forbids it. Enter intrepid salesman Aarvid Gisselsen, dragging a giant karaoke machine that he swears will save the bar and bring romance back into their icy world. Clara, Bernice, and the menfolk sing their way through the karaoke machine’s extensive menu of works by the immortal Sven Yorgensen, including such classics as “I’m A Walleye Woman in a Crappie Town,” “He Wore a Purple Tux,” and my personal favorite, “Little Ernie Eelput” (from Yorgensen’s Peter, Paul and Mary phase). In the end, Gisselsen’s promise comes true, and everybody (well, almost everybody) discovers or rediscovers the love that’s been missing from their lives.

Each of the five actors brings it all every time they walk on the stage, and each brings something unique. Among the highlights? Watch Kevin-Michael Moore’s face - if competitive girning ever becomes a fad, my money will definitely be on his Gunner character, and he brings to mind the grizzled folksiness of a Gabby Hayes (without the six-shooter). Revel in the tough/tender combination that Elizabeth Young brings to the role of Clara, and the gradual evolution toward confidence in Clara-Liis Hillier’s sweet Bernice as she find her inner diva in a red dress. Poor Peter Liptak (Kanute) is the only unrepentant jerk in the show, but he still charms us with song and dance to balance his blustering Midwestern chauvinism.  The real sleeper is Matthew H. Curl, whose Aarvid is sort of a tentative but persistent Harold Hill – in fact, the show has been described as “Fargo meets The Music Man, without the blood or trombones.” Curl’s “My Smorgasbord of Love” is a real showstopper, and I salute his ability to deliver the song with a straight face.

Unique in my experience with Broadway Rose, Don’t Hug Me uses prerecorded music – more of a challenge for the vocalists, but definitely appropriate to a karaoke-themed musical. Bryan Boyd’s scenic design is delightfully evocative of the time and place, as are Annie Kaiser’s costumes.

Don’t Hug Me is pure schmaltz with a big dose of heart, and it provides a wonderful, if all too brief, refuge from the outside world. Broadway Rose is still checking for proof of vaccination or negative Covid test, so even if masking is now optional I felt quite comfortable joining the opening night audience. There are so many reasons to get your tickets and see this little gem – just do it! Tickets are going fast, especially for the coveted Mother’s Day/closing performance.

Posted by Femspective at 7:15 PM