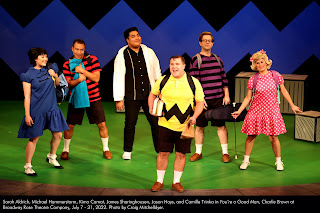 Broadway Rose welcomes the onset of another Portland July with a tried and true audience pleaser, beloved of the boomers who grew up with the Peanuts gang and by their grandchildren (and, gasp, great-grandchildren!). You’re A Good Man, Charlie Brown is perfect summer fare – light, but not empty; fun, but not silly; childlike, but not childish – just like Charles Schulz’s iconic 17,897 original Peanuts comic strips. Director Dan Murphy’s relationship with the show extends back into his elementary school days, and it shows in the care he has taken to present this gem in its best light.

The show has undergone some changes in the 55 years since its 1967 debut with Gary Burghoff in the title role (Iwould have loved to have seen that!), so authorial credit goes to the original author, Clark Gesner, with additional credit to Michael Mayer and Andrew Lipa.  Along the way, Peppermint Patty was replaced with Sally – having seen the earlier version of the show, I can confidently state that this was an upgrade.  The script and songs consist of a series of vignettes, with no consistent story line – really the only way you can capture the flavor of Schulz’s vision without limiting the scope of such a vast body of work. Many classic Peanuts conventions, including Lucy’s adoration of Schroeder, Schroeder’s adoration of Beethoven, Charlie and his kite, Snoopy vs. the Red Baron, Linus’ blanket, and more are captured in the show’s 16 (gorgeously staged) production numbers.

Each cast member creates a thoroughly memorable character, but there are a few real standout moments.  First among equals is Kimo Camat’s “Snoopy” – he commits 100% to his canine identity, with all of the shaking, wiggling, howling, scratching, yawning physical comedyyou could want from America’s favorite (if slightly delusional) beagle.  His vocals are flawless, but his pièce de résistance is the increasingly frenetic choreography (with “Sally”) of “Rabbit Chasing.”  Speaking of “Sally” (hilariously played by Camille Trinka) – in addition to her work with Snoopy, watch for her charmingly volatile “My New Philosophy.”  I fell in love with Michael Hammerstrom’s security obsessed “Linus” in part for his heart-warming “My Blanket and Me” but also for his serious intellectualism and wide-eyed sincerity throughout – Hammerstrom creates a kid I’d really like to know.

Like the queen she wants to be, Sarah Aldrich commands the stage as Charlie Brown’s narcissistic nemesis, Lucy. Whether she’s mooning over Schroeder, bullying her baby brother, or deceiving Charlie Brown with faux empathy in “The Doctor Is In” she is snide, sarcastic, and condescending, with that amazing mixture of arrogance and ignorance that has become a hallmark of 21st century American life. Everyone who has ever been to elementary school will recognize and relate to Aldrich’s contribution to “The Book Report” – and back in the day we even had to count words by hand! Jason Hays is a delightful Schroeder whose enthusiastic rendition of “Beethoven Day” earns a much-deserved wave of audience applause, and his segments of “The Book Report” are nothing short of brilliant.

Sadly, if appropriately, James Sharinghousen’s starring role as “Charlie Brown” is generally overshadowed by his more confident, passionate, and outspoken cast mates. As it is in the comic on which it is based, Charlie’s character is drawn to be submissive, naïve, sometimes almost invisible – in many ways, the audience sees him most clearly through the eyes of the others. Sharinghousen is saved from being an object of pity by the eternal optimism he gives his character, an optimism that is finally validated when Lucy (in the final scene) temporarily abandons her abrasive persona and acknowledges that he is, in fact “a good man.”

Massive props are due to the team of Sean O’Skea and Kristeen Willis as scenic and lighting designers – the shifting colors and intensity of the light within the striped backdrop and huge blocks create a constantly changing ambience that coordinates beautifully with the action on stage. Musical director Darcy White manages to turn 5 instruments into a solid orchestra that fully complements the powerful and precise vocal ensemble work of the cast.

While You’re A Good Man, Charlie Brown is fun and accessible enough to delight most children, it is definitely more than a children’s show or simply a brief voyage into nostalgia. Aside from some of the finest vocals and dancing you are likely to see on local stages, the show succeeds (as did Schultz) in drawing children as fully formed humans with the hopes, dreams, intellect, and passion that will shape their adult lives. If you have any kiddos around the house, by all means take them – but don’t hesitate to go all by yourselves!

Posted by Femspective at 8:05 PM