Beaverton Civic Theatre’s first show of the year, “Harvey,” bodes well for the 2012 season. Although the play was written over fifty years ago, the production clearly demonstrates that the show has lost none of its humorous edge. The opening night full house audience responded enthusiastically to author Mary Chase’s whimsical exposé of the pitfalls of social climbing and the foibles of “modern” psychiatry, and director George Heckert made sure that none of the comic potential of the show was missed.


For those not familiar with “Harvey,” in a nutshell: Veta Louise Simmons and her oh-
so-lovely daughter, Myrtle Mae, have moved back to the old family homestead left
to Veta’s brother, Elwood P. Dowd. Veta aspires to respectability, but fears that her
brother’s eccentricity (he drinks a bit and his best friend is a 6 ½ foot tall invisible rabbit
named Harvey) will be a barrier to her entrée into the best circles. In desperation, she
colludes with the family lawyer to have Elwood committed to a nearby mental institution,
Chumley’s Rest. From the moment the scene shifts to Chumley’s, the play is a classic
comedy of errors exploited skillfully by the entire BCT cast.

Any production of “Harvey” rises (or falls) on the strength of the actor portraying
Elwood P. Dowd. Veteran actor Steve Holgate is brilliantly cast in the lead role; his
quiet confidence, innocence, and understated charm accent his superb comic timing.
Dowd is a gentle and respectful man, and Holgate embodies these qualities in his
approach to the character. The program mentions that Holgate has performed regularly in
a one-man show about Abraham Lincoln – and after seeing him in “Harvey” we are eager
to catch him playing one of America’s greatest and most thoughtful gentlemen.


Elisabeth Goebel as Veta Louise Simmons brings just the right balance of propriety, tenderness, and hysteria to one of the play’s pivotal roles. Goebel manages to convince us that, despite Veta’s dreadful pretentiousness, she has a lot more in common with her brother than she ever knew. Also, Tonja Schreiber’s Myrtle Mae is convincingly desperate in the role of a man-hungry and frustrated young woman.

Among the supporting cast, a clear standout is Amanda Clark as Nurse Kelly. Her exceptionally mobile facial expressions combined with her crisp timing and delivery are reminiscent of Fanny Brice, and BCT is fortunate to be able to draw upon her talents.

For an opening night performance, the production was notably error-free. There were no obviously muffed lines, and each of the principals earned a share of the evening’s many laughs. Given the limitations of the venue (there is no curtain, and wing space is in short supply) the scene changes were effected smoothly. The sets are simple, but sufficient to capture the ambiance of a 1940’s era drawing room
and the sterile intake room in a mental hospital.

Artist Loren Hillman deserves special recognition for the truly remarkable portrait of Elwood and Harvey; the likeness to Holgate is striking, and (unlike the depiction in many productions of the show) she captures Harvey essence as an elfin sprite rather than just an oversized Easter bunny. BCT will be missing a great fund-raising opportunity if they do not auction this portrait off at the end of the season!

Posted by Westside Theatre Reviews at 4:43 PM No comments: 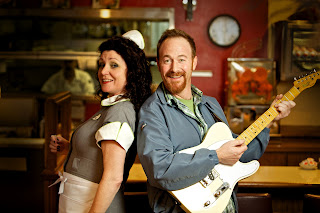 Broadway Rose Theatre Company’s current production of “Pump Boys and Dinettes” is classic “good-time” musical entertainment. Theater goers seeking existential angst and harmonic dissonance may wish to look elsewhere – but for the rest of us, it’s an evening well-spent.
One of the advantages of a show written to evoke a simpler time and place is that it is essentially timeless. The set captures perfectly the ambience of a roadside diner attached to a gas/station garage deep in the , where the “wimmin’ work hard and the men folk hardly work.” The relationship between Rhetta and Prudie Cupp, the Dinettes, and their Pump Boy neighbors is sketched by a smattering of dialogue that loosely binds the show’s twenty songs. These well-crafted songs, which run the gamut from blues to country with a pervasive rockabilly influence, don’t just tell the story – they ARE the story.
The six cast members deliver engaging vocals, with uniformly tight harmonies – and they also provide the instrumentation. The Pump Boys display their musical virtuosity on bass, lead, and rhythm guitar, keyboard, and accordion, supplemented by the Dinettes’ enthusiastic use of spoons, ratchets, wrenches, even a support post for percussion.
Barney Stein (the show’s musical director) captures the character of L.M. with two great numbers – the bluesy “Serve Yourself” and the irrepressible “Farmer Tan,” which also puts his dance background to good use. Sharon Maroney (Prudie) expresses the plight of a middle-aged waitress living off tips and dreams in the middle of nowhere with the plaintive country ballad “The Best Man.” Jim (Stephen Flakus) is equally poignant in “Mamaw,” which takes him back to an idealized childhood. The a cappella harmony in “Fisherman’s Prayer” is a beautiful blend of the Pump Boys’ voices, while Prudie and Rhetta (Lisamarie Harrison) express their characters and vocal prowess in “Tips” and “Sister.” Lisamarie gives an especially powerful delivery of “Be Good or Be Gone.” Like Prudie, Jackson (Andrew Maldarelli) yearns for love – in his case, it is a Woolworth’s cashier named “Mona” who has stolen his heart. Bass player Eddie (Sean Vinson) continues the country western tradition of the silent, slightly dim yokel. His superb work on the bass guitar belies the allegation that he is a product of inbreeding from nearby (and much detested) .
For an opening night performance, glitches were few and far between. During the first act, the volume of the instruments competed with the vocals, and sometimes the vocals lost. However, this was effectively corrected at intermission, and it in no way interfered with the audience’s enthusiastic appreciation of the production.
“Pump Boys and Dinettes” is playing at the Broadway Rose New Stage through Sunday, March 4th.
Posted by Westside Theatre Reviews at 5:49 PM No comments: