If you’re going to ask an audience to sit for 2 ½ hours in an older theater without air conditioning on a genuine Hot August Night, it’s a good idea to offer free bottled water, ice cream sundaes at the end, and top-flight entertainment. Light Opera of Portland (LOoP): Water? Check. Ice cream? Definite double check. Top-flight entertainment? Amazing triple check – this production of Iolanthe is a must-see for local audiences with a passion for Gilbert and Sullivan’s wryly absurd musicals.

Artistic Director Dennis Britten and Musical Director Linda Smith have teamed up to once again mold a talented cast into a whole that is much greater than the sum of its parts. The cast is loaded with strong vocalists, some new and many of them veterans of previous LOoP productions.  The ensemble work is powerful, intricate, and often quite beautiful – but most important, it’s just plain fun. A show selling its underlying themes (satirizing the absurdity of both political and sexual norms, in some ways as appropriate today as when written) through an utterly nonsensical premise can easily turn into slapstick unless the cast and production team take an unwaveringly serious and professional approach – and LOoP cannot be faulted on this count.

Utterly nonsensical? Try this: Iolanthe is a fairy, banished from fairyland for marrying a mortal. Some 25 years later, the Queen of the Fairies relents, and allows Iolanthe to return from exile. Everyone is shocked to learn that Iolanthe was pregnant when banished, and now has a 24 year-old son – a half-human, half-fairy Arcadian shepherd named Strephon. Strephon is engaged to the fair Phyllis, an Arcadian shepherdess who is also, remarkably, a ward of the British chancery (the geographic gap between Greece and Great Britain being conveniently overlooked). Phyllis is not yet of age, and needs the permission of The Lord Chancellor to marry – but all of the members of the House of Peers are infatuated with Phyllis (including the Lord Chancellor).  Phyllis, who does not know about Strephon’s hybrid genealogy, believes her beau has cheated on her when she sees him embracing a young, beautiful woman (his mother Iolanthe, who looks 17 because she is a fairy and does not age quite like the rest of us). All this, and we’re barely half way through Act I!

The story ostensibly revolves around Phyllis and Strephon, ably portrayed by Lindsey Lefler and Laurence Cox. Lefler shifts from wide-eyed innocent to determined lover, seasoned with bouts of petulance – all expressed through flashing eyes, a melting smile, and her pitch-perfect soprano delivery. Cox brings a solid voice to the role, while capturing the contradictions inherent in his fairy/human background – a slightly androgynous affect consistent with being fairy on the top half, human on the bottom, and “extremely pretty, but inclined to be stout.” However, many of the show’s most charming touches come from other characters – on team fairy, particularly Sarah Ominski’s politically astute and mischievous “Leila,” Jan Rosenthal’s bumbling “Fleta” (watch for her shoes!), and Sheryl Wood’s mercurial “Queen of the Fairies.” Gilbert and Sullivan wrote the peers as stuffed shirts utterly bereft of any redeeming social value, but the tradeoff is that they get most of the really funny lines – Rob Patrick (“The Lord Chancellor”), Mark Flannery (“Earl of Mountararat”) and Dennis Kelly (“Earl of Tolloller”) are hilarious in a couple of debates about their relative suitability as Phyllis’ mates. Additionally, Kelly’s surprisingly powerful voice firmly anchors the male vocal ensemble.

The show is done with just two sets – a pleasant woodland scene for Act I, the London skyline for Act II – so no time is lost to scene changes. Woody Woodbury’s guardhouse is particularly detailed, and subtly (perhaps inadvertently) captures a timelessness consistent with the show’s comic surrealism. Costume designer Sandra King has done well by both fairies and peers, although perhaps the male ensemble would appreciate fewer layers of tuxedo and ermine on hot nights! Finally, pianist Linda Smith’s musical direction is flawless. With just piano, flute, occasional trumpet, and vocals she more than satisfies the complex demands of light opera.

The Alpenrose Dairy Opera House has fine acoustics and ample space to accommodate the audiences that this show deserves. With only a two-week run, don’t delay – this offering may not appear on a Portland stage again for a long, long time!

LOoP presents Iolanthe through Sunday, August 28th with performances at 7:30 on Friday and Saturday and 3:30 on Sunday at Alpenrose Dairy Opera House, 6149 SW Shattuck Road, Portland.
Posted by Westside Theatre Reviews at 9:51 AM No comments: 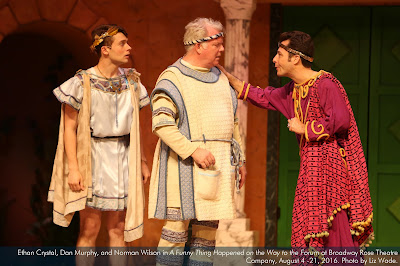 Apparently, the movers and shakers at Broadway Rose have a seer (perhaps Pseudolus?) – how else to explain their prescience when, in spring of 2015, they selected the unabashedly silly, utterly diverting comedy A Funny Thing Happened On The Way To The Forum to lighten up our mood during this bizarre political season?  Sometimes a hefty dose of slapstick is just what the doctor ordered, and for 2+ hours last Friday, I (along with hundreds of other happy folks) was transported into a world of music, dance, and comedy where absolutely anything goes, as long as it’s fun.

The show was crafted by a thoroughbred team – book by comic writers Burt Shevelove and Larry Gelbart, music and lyrics by the matchless Stephen Sondheim.  Forum made its Broadway debut in 1962, winning Emmy Awards for Best Musical and Best Author (Musical), and its literally timeless structure means that in good hands it needs never become dated. Luckily for local theatergoers, this production is in very, very good hands. Director Abe Reybold’s cast, a mixture of top-notch Broadway Rose veterans and new blood, brings a wealth of experience as well as copious youthful exuberance to the stage, and the result is utterly flawless farce.

The story (a play within a play) is set in Ancient Rome, presented by a troupe of actors who alternate nightly between works of comedy and tragedy. The song you can’t get out of your head, “Comedy Tonight,” tells us which genre we’ll be seeing this evening.  Action takes place on a street with three stately homes. The center house is that of respectable but hen-pecked Senex, his overbearing wife Domina, and son Hero. His neighbors are Lycus, a high-class pimp, and Erroneous, a bereaved and befuddled old man off seeking his long-lost children (stolen in infancy by pirates, of course). Domina is determined to preserve Hero from temptations of the flesh, but he espies the fair virgin Philia on a balcony at the House of Lycus and is immediately smitten. In exchange for a promise of freedom, Hero’s slave Pseudolus plots to bring the two young lovers together – not an easy task, since Lycus has already sold Philia to the blustery General Miles Gloriosus. Things get even more complicated, and the ultimate resolution rests (as it must in a good farce) on a series of thoroughly implausible events leading to the promised happy ending.

Broadway Rose General Manager Dan Murphy tackles the tough role (how do you follow Nathan Lane and Zero Mostel?) of the canny and freedom-loving Pseudolus with ease. His uninhibited, energetic embrace of the character drives the entire show, and gives him ample opportunity to display his chops as a vocalist and a physical comic. When Murphy’s huge smile lights up the stage the whole audience starts pulling for Team Pseudolus. Joe Thiessen delivers some great moments as Hysterium, Pseudolus’ unwilling and tightly wound co-conspirator –the point where he starts to believe his own shtick in “I’m Lovely” is unforgettable.

Ethan Crystal (Hero) and Kaitlyn Sage (Philia) are perfectly matched as comic book one-dimensional ingénues, gracing Sondheim’s love song parodies “Love I Hear” and “That’ll Show Him” with their flawlessly pure tenor and soprano tones.  In addition, there is no shortage of memorable individual performances among the other thirteen cast members, not to mention stunning ensemble work in numbers like “Comedy Tonight” and the wittiest song in the show, “Everybody Ought to Have a Maid.”

Costume supervisor Brynne Oster-Bainsson decorates the set with her elaborate and (especially for the courtesans) imaginative designs, a fine complement to the Sean O’Skea’s colorful, witty and elaborate scenic design. The two combine their skills to create and populate a tiny Roman Toontown that could have come straight from the streets of Disneyland.

Already bored with the Olympics? Fed up with presidential politics? Do yourself a big favor and allow Broadway Rose to temporarily transport you to a singing, dancing world of harmless horseplay with something for everyone, where everything is both funny and fun. You deserve a comedy tonight!

Broadway Rose’s A Funny Thing Happened On the Way to the Forum runs through August 21st at Tigard High School’s Deb Fennell Auditorium.
Posted by Westside Theatre Reviews at 8:25 PM No comments: