HART’s Mattress Anything But a Sleeper

By Tina Arth and Darrell Baker
Truth in advertising: we had a tough time imagining how Once Upon a Mattress would play in the relatively small space available at ’s HART Theatre. Immediately after the lights went up at Friday’s opening performance, we relaxed – it became clear that the intimacy of the venue is an asset, not a liability, at least in the hands of this production’s director, cast, and production crew.

Mattress purports to tell the real story of the beloved children’s classic, The Princess and the Pea. The team of Jay Thompson and Dean Fuller (book), Marshall Barer (lyrics), and Mary Rodgers (music) created an adult fairy tale that has brought laughter to audiences for over 50 years – ever since funny lady Carol Burnett made her Broadway debut in the role of Princess Winnifred.  In this version, the aptly named Queen Aggravain has decreed that no one in the kingdom may marry before her son, the much-daunted Prince Dauntless, weds an approved princess. For reasons best left unexplored, no woman is good enough for the Queen, who devises impossible tests for each would-be royal bride. The story opens with the rejection of applicant #12, the Prince’s apparent last hope. The unplanned pregnancy of Lady Larken inspires baby daddy Sir Harry to rove far afield in search of another candidate. After combing the northern swamps, he returns with Winnifred the Woebegone (“Fred”) a moat-swimming bog princess and unlikely heroine who captures the hearts of all except, of course, her potential mother-in-law.


Wendy Bax plays the part of Queen Aggravain as though she had been, as Groucho Marx once said, “vaccinated with a phonograph needle.” Her aggressively strident performance captures the spirit of the conniving über-momma to perfection. Her husband, the accursed King Sextimus the Silent, is skillfully portrayed by local theater veteran Tony Smith, a character actor so good at playing “befuddled” that we sometimes wonder how he finds his way home from the theater.


Ky Fifer (Sir Harry) handles the transition from arrogant sexist to sensitive lover with aplomb, and his superb delivery of “Yesterday I Loved You” adds a touching romantic interlude to the show’s comedic tone. Kristin Barrett (Lady Larken) brings vulnerability, crystal diction, and a fine singing voice to the role. She has great timing and a mobile face that bring comic relief to the pathos of her predicament.


In a show filled with strong vocal performances, Jake Beaver (the Jester) and Brandon Weaver (the Minstrel) stand out. Their solo and duet numbers provide some of the finest musical moments, and Weaver’s formal enunciation creates a medieval atmosphere. In “Very Soft Shoes,” a tribute to the Jester’s father, Beaver display surprising coordination and grace twirling a magic wand.


Tyler Gould gives Prince Dauntless’ wide-eyed innocence and curiosity a restraint that really works in the small theater, where subtle facial expressions can speak volumes, and his strong vocals make “Song of Love” a delight. His shy but eager demeanor is a perfect counterpoint to Fred’s bold physicality. Finally, there’s Erin Zelazney (Fred). From the opening notes of “Shy” we knew that we, like Dauntless, were in love. She is a brassy belter with a solid voice, yet she conveys a plaintive insecurity that makes “Happily Ever After” a show-stopper (with the aid of those marvelous puppets).


In an act of close-up magic, Director Peter Stein and Music Director Alice Dalrymple succeed in putting a large-scale musical, including complex vocal harmonies and broad physical comedy, virtually into the laps of a very appreciative audience.

Once Upon a Mattress is playing at ’s HART Theatre, , through June 30, with performances Friday and Saturday at 7:30 and Sunday matinees at 2:00.


Posted by Westside Theatre Reviews at 6:48 AM No comments:

THE DIXIE SWIM CLUB: IT’S ALL ABOUT TEAMWORK 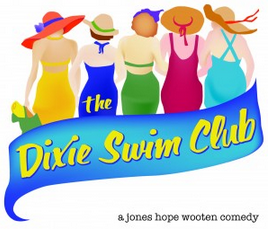 Theatre in the Grove’s current offering, The Dixie Swim Club, is one of those rare show-biz animals where the quality of the production not only enhances, but outshines, the quality of the original script.  The play, a 2007 work by playwrights Jessie Jones, Nicholas Hope, and Jamie Wooten, is occasionally overly expository and somewhat derivative, with strong influences from oft-performed classics like Same Time, Next Year and Steel Magnolias, plus a liberal dose of The Golden Girls  (not surprising, as Wooten was a co-writer on the popular sitcom). Happily, Director Jeanine Stassens does not allow her fine cast to rely on trite stereotypes to develop their characters.

The Dixie Swim Club tells the story of five women, friends since their college swim-team days, who reunite annually at a cottage on the Outer Banks of North Carolina. Over a 55-year period, the friends are shown reconnecting as they navigate their lives’ many changes – challenges like unwed motherhood, no-account children and husbands, leaving the convent, the physical changes associated with aging (and one characters’ fight to ward off this harsh reality), disease, grandchildren, and even death. Through all of the drama, the five very different women manage to preserve the friendships that grew from their accidental meeting in the college pool.

Former team captain Sheree (Jeanna Van Dyke) is, in many ways, the dominant member of the group. Alone at the beginning of the first scene, she seems somewhat uninhibited, but Van Dyke smoothly shifts into her character’s take-charge persona as soon as Lexie (Patti Speight) arrives on the scene. Van Dyke manages to be pushy and intrusive while retaining a fundamental likeability that justifies her friends’ loyalty; in the scene where she finally cracks, Van Dyke convincingly finds her character’s long-suppressed vulnerability. Speight has a lot of fun, and many of the best lines, with the role of Lexie, who seems to be irredeemably self-centered and shallow (who MARRIES her plastic surgeon?).  In the second act Lexie is forced to undergo a dramatic transformation, and Speight gracefully handles the challenge of plumbing her character’s new-found depth.

The characters of Jeri Neil (Tanja Crouch) and Dinah (Anne Kennedy) also undergo profound personality changes. Jeri Neil moves from naive nun to happily married woman, yet Crouch manages to retain her character’s fundamental innocence even as she becomes a sexual being. Dinah bridges her estrangement from Lexie, evolving from a career-driven (and hard-drinking) solo lifestyle to a compassionate and supportive friend. Kennedy demonstrates her skill as an actress through the restraint she brings to her performance.

The role of Vernadette, plagued by a lifetime of hard luck, in many ways dwarfs the breadth of the other characters’ transformations. Virginia Kincaid brings years of acting experience to the part; her timing and delivery provide comic relief until the last scene, where she subtly expresses her own unique version of memory loss and aging.

The teamwork of director, cast, and crew combine to breathe life and depth into the play.


The quality of the acting is matched by strong production values – the sound and lighting are flawless. Director Stassen and have designed a striking set that manages to capture the beauty of the unseen beach panorama and the elegant charm of the cottage.

The Dixie Swim Club plays at Theatre in the Grove, , Forest Grove through June 16th.
Posted by Westside Theatre Reviews at 11:14 AM No comments: