SHIRE IN THE GROVE 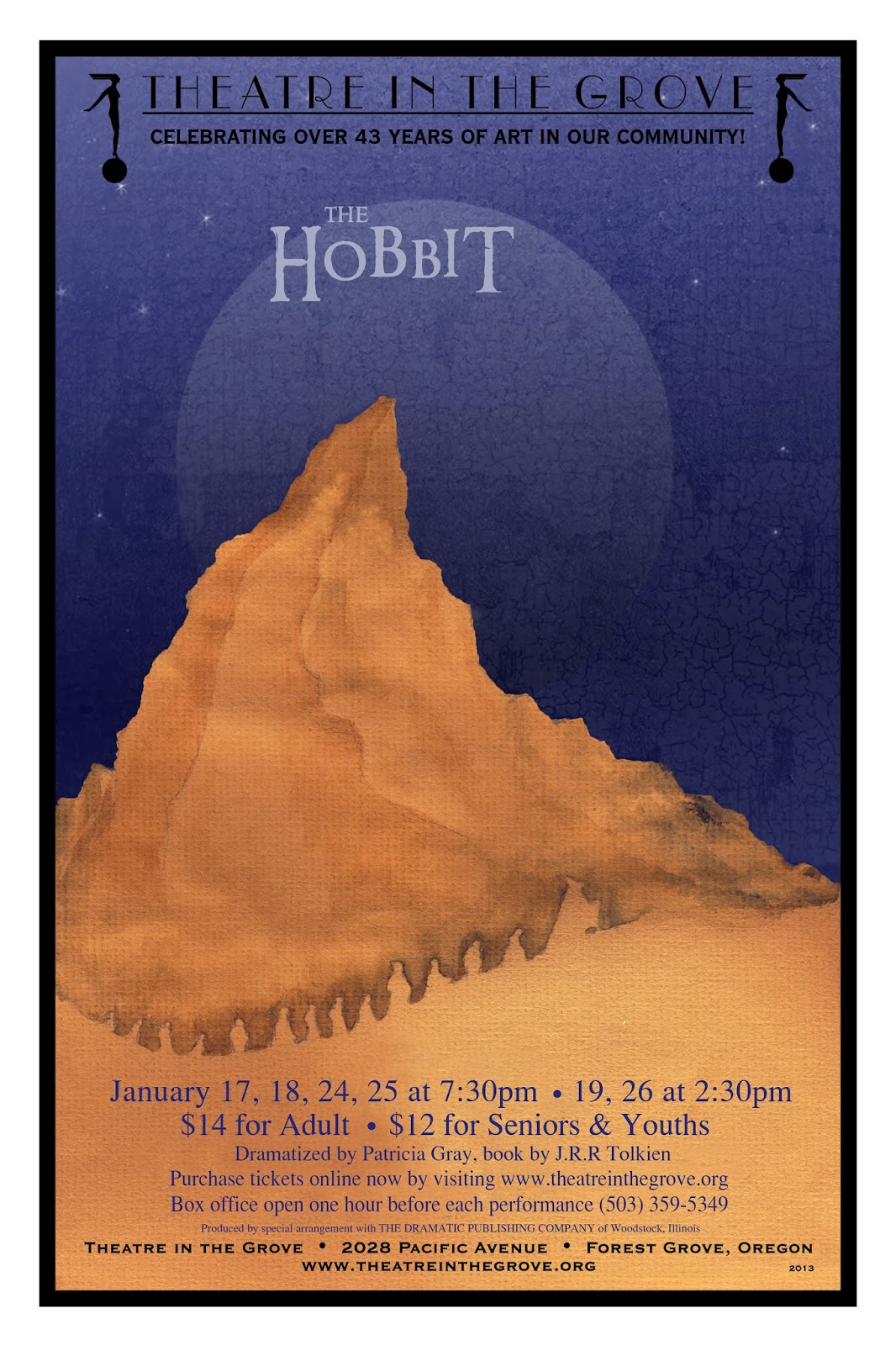 By Tina Arth and Darrell Baker
J.R.R. Tolkien’s classic tales of Middle Earth can be writ as large as Peter Jackson’s expansive film series or as small as a cozy fireside tale from the Shire. Theatre in the Grove’s current production of The Hobbit works precisely because it falls so firmly into the latter camp.


Patricia Gray’s adaptation of Tolkien’s original work manages to capture the key plot points within the confines of an action-packed single act. The things we remember most from the novel (Bilbo and his hobbit-hole, Gandalf, Thorin Oakenshield  and his hardy band, the trolls, the goblins, the wood elves, Smaug the Dragon, and of course the unforgettable Gollum) are all represented in a condensed but coherent and accessible narrative.


Forest Grove high school student Adam Borrego was last seen at TITG as the Fiddler in Fiddler on the Roof. In The Hobbit, Borrego does dual duty, giving one of the evening’s best performances as Dwarf King Thorin Oakenshield and serving as the show’s director. Borrego’s maturity as an actor is matched by the leadership he provides his mostly youthful and exuberant cast, and his director’s note makes it clear that he took a thoughtful and deliberate approach to presenting the material.


Gray’s version of The Hobbit is dominated by four key players: Bilbo, Gandalf, Gollum, and Oakenshield.  Despite his hairless toes, Malachi Skjeie was an inspired choice for the diminutive and reluctant hero, Bilbo Baggins. Skjeie deftly captures the duality of Bilbo’s nature – drawn to hearth and home like a good Baggins, yet ultimately unable to resist Gandalf’s promise of adventure (a reckless vice he inherited from his mother’s side of the family).  Mark Putnam is suitably elusive as the wizard Gandalf, and despite his voluminous beard he manages to deliver his lines with magisterial clarity. And then there’s Noah Burgess as Gollum – slithering up from the dark recesses of TITG’s dank cellar, contorting himself with sinuous grace, and hissing his character’s whiny dialogue with sinister sibilance.


The ensemble is populated primarily by young actors, many of them perhaps getting their first taste of live theater (as director Borrego did in his 2007 stage debut). They are uniformly enthusiastic, but the chaos is controlled – one of best moments in the play is the scene where all eleven dwarves cheerfully lay waste to Baggins’ tidy hobbit hole. Some of show’s charm comes from its youngest players – the Forest Elves and Attendant Goblins – whose presence subtly reminds the audience that this is, in fact, a fairy tale.


TITG’s telling of The Hobbit is enhanced by simple, but effective and cleverly designed sets that suggest Tolkien’s Middle Earth while allowing for quick scene changes. The lighting and sound design complement the sets, enhancing the story by bringing an atmosphere of fantasy and creating magic, when magic is needed.


While The Hobbit is in many respects a regular TITG production, it has the added distinction of being part of the company’s annual Schools program, designed to bring drama and its literary adjuncts to local students. In addition to the regular run, several daytime, midweek performances are offered especially for area schools, and hundreds of young people get a taste of theater through this medium.


The Hobbit is playing at Theatre in the Grove, 2028 Pacific Avenue, Forest Grove., with regular performances at 7:30 on January 24th , 25th  and a Sunday matinee on January 26th.

Posted by Westside Theatre Reviews at 12:07 AM No comments: