‘Tis The Season to Be Silly at BCT!

By Tina Arth and Darrell Baker
Beaverton Civic Theatre’s 2013 season has taken its audiences on a wild ride from the sublime to the ridiculous. After the somberly enthralling production of The Crucible, this versatile troupe brings us If It’s Monday, This Must Be Christmas, a piece of holiday fluff that ends the year on a much lighter note.

﻿
Author Pat Cook began his prolific career as a playwright after being inspired by Neil Simon. While Cook’s script is often clever, Mr. Simon can rest easy – Cook’s work is no challenge to such classic comedies as The Odd Couple and Plaza Suite. Happily, by late November theater audiences are sometimes less interested in great writing than in silly comedy, which Cook delivers with a vengeance.
The story? Good heavens! The gift-wrapped payroll for Harrigan’s Department Store has disappeared, along with the store’s Santa Claus. Whodunit? Store employee Loretta Mondello calls in her son, private eye/dogwalker Harry Monday, whose bumbling detective style ultimately cracks the case (of the missing money – inexplicably, Santa never does turn up…). Along the way, mayhem ensues (two acts worth)!


The “bumbling detective” (who is really quite shrewd) is a stock mystery character. However, Harry Monday, as portrayed by John Ollis, defies the stereotype – lots of bumble, not much shrewd. Ollis frequently breaks the “fourth wall”, addressing the audience in a friendly but conspiratorial tone that keeps us on track with the show’s convoluted plot.


What passes for love interest in the show comes from the relationship between store employee Carson Page (Les Ico) and store owner’s daughter Penny Harrigan (Harmony Rutter).  These two young actors deliver some of the most natural and believable moments in the play. The other two younger performers also bring their best games. Kassy Williams does a great job of portraying Polly Brogan, a nagging little brat in search of Santa, and Riley Edwards (Harry Monday as a child) shows so much moxie that one wonders how he grew into the bumbling adult version of the character.

Patti Speight brings all the intensity of a ticking biological clock to the role of Scarlett Kloontz, and Patrick Brassell (store owner Titus Harrigan) is appropriately bombastic. Patricia Herkert creates a frenetically wide-eyed and perky elf who ranges from excitable to downright hysterical.


Director George Herkert has assembled a fine production team. The set, while simple, is attractive and appropriate, and the costumes capture the spirit of the characters. The huge opening-night crowd proved a bit distracting – many audience members were seated in portable chairs along the aisle with less than optimal sight lines, and the show began more than ½ hour late. Perhaps the time has come for BCT to reconsider their admirable “donate two books, get in for $5.00” opening night promotion – maybe by selecting a slower evening (or matinee) for this attractive deal.


Beaverton Civic Theatre’s production of If It’s Monday, This Must Be Christmas runs through Sunday, December 8th at the Beaverton City Library Auditorium, with 8:00 pm shows on Friday and Saturday and 2:00 pm matiness on Sunday.


Posted by Westside Theatre Reviews at 10:11 PM No comments:

Chaos, Comedy, Christmas at the HART

By Tina Arth and Darrell Baker
HART’s current production of The Best Christmas Pageant Ever is probably not the best show we’ll see this holiday season, but it may well be the most enjoyable. In the lobby before the show, Director Ray Hale said “you can’t go wrong with kids” – while this is not always the case, it’s certainly true of this particular collection of quirky young performers.
Author Barbara Robinson tells her simple tale quickly, with a series of blackouts to speed the story along.  It’s time for the annual Christmas pageant, and the regular director, Mrs. Armstrong, is out of commission. A team of locals gang up on fellow mom Grace Bradley, who reluctantly agrees to direct the show. Her husband, Roberto, who is no fan of the annual production, even more reluctantly agrees to help out by shepherding the shepherds and baby angels. The casting process falls apart when the Herdmans, who are the worst kids in the world, demand lead roles. Nobody dares oppose this group of cigar-smoking, lying, stealing, violent thugs, whose marginal grasp of the basic Christmas story casts the Wise Men as spies and Herod in need of a thorough beating. Of course, a little good old-fashioned holiday magic transforms the Herdmans, who end up giving their Christmas welfare ham to the baby Jesus (so much more practical than myrrh!).
Even with 30 talented kids on stage, there are a few real standouts. The role of sneaky little prig Alice Wendleken was filled on opening night by Rylie Bartell, who brings a gleeful abandon to her appalling self-righteousness.  While each of the four baby angels is disturbingly cute, we couldn’t take our eyes off of four-year-old Zebulen King, whose irrepressible squirming, bobbing, and weaving leaves the whole audience giggling.  Beth Bradley (played by Libby Solheim) keeps the story moving along with her concise and insightful commentary.
And then there are the Herdmans – especially Imogene (Sarah Felder) as history’s least maternal Mary. Felder’s transformation from belligerent and neglected delinquent to loving symbol of maternal devotion is surprisingly touching, and has a salutary effect on the rest of the wild Herdman brood. Younger sister Gladys Herdman (Grace Malloy) steals several scenes with her exuberant take on the Angel of the Lord – not so much a Heavenly Messenger as a “Shazam!” shouting Dark Knight.


Several of the adults (in particular, Molly Stuckey as Grace Bradley, Luis Ventura as Roberto Bradley, and Sue Ellen Christenson as Mrs. Armstrong) give excellent performances, but this show is all about the children who animate and illustrate the tale.
If you need a little Christmas, start at the HART. The quiet beauty of the set’s stained-glass windows and velvet hangings evoke a peaceful sanctuary – in direct contrast to the frenetic energy of the pageant preparations. Pianist Alice Dalrymple provides flawless accompaniment to pageant participants, and holiday music by the STAGES show choir starts the evening and sets the proper tone – reverent, yet slightly chaotic. The tech crew literally and figuratively shines despite the challenge of over 100 separate lighting cues – another tribute to Director Ray Hale’s patience and attention to detail.

Innocence and Villainy at Mask & Mirror 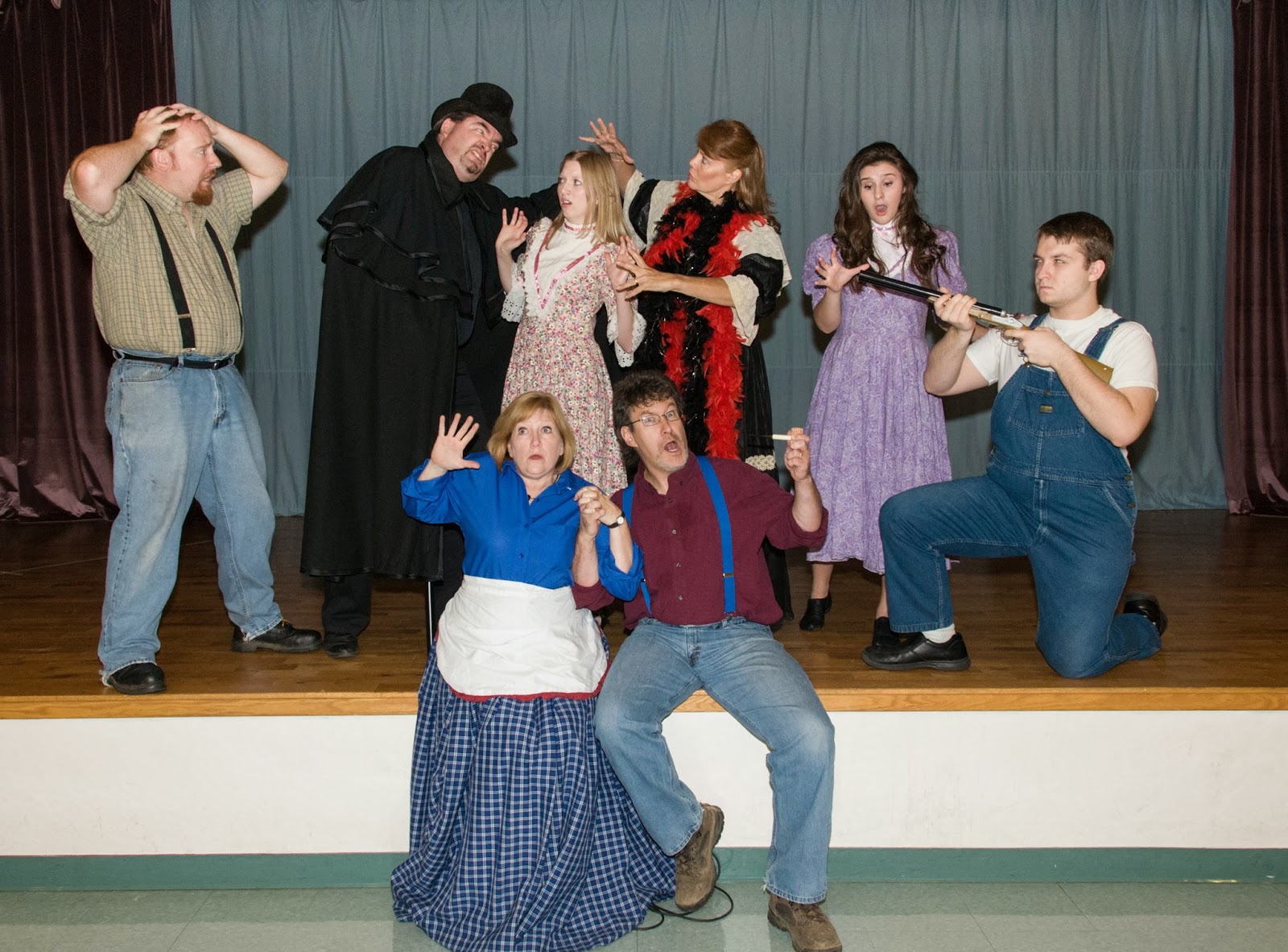 By Tina Arth and Darrell Baker
Mask & Mirror Community Theatre kicks off its 2013-14 season with a generous dose of good old-fashioned musical melodrama, No, No, A Millions Times No! (Only a Farmer’s Daughter). Although it is by no means a holiday-themed show, the production delivers a hearty dose of tongue-in-cheek nostalgia that is well suited to the festive mood of the season.


Melodrama can be challenging. The script is often simple, and an effective production requires that cast and audience throw themselves unreservedly into the show, suspending pretty much every thing they ever learned about appropriate theatrical technique and decorum. Director Sandy Libonati has done an admirable job with her cast, all of whom wholeheartedly throw themselves into their over-the-top roles. The opening night audience, while appreciative, did not quite live up to their end of the bargain. Perhaps in 2013 a melodrama audience needs a bit of tutoring in the conventions of the genre; the director might consider doing a few brief warm-up exercises (“hiss.” “boo,” “ahhhh,” etc.) to loosen up the crowd.


As with any standard melodrama, the story can is pretty black and white. The farmer’s daughter, Nellie, thought to be a paragon of virtue, has been microscopically soiled by the villain, Stafford Blackman, who lured her to the big city with the intent of “doing her wrong.” Having detected Blackman’s villainy, she flees back to her trusting Pappy Quackenbush and love-struck suitor, Noble Hart. Blackman and his corrupt paramour, Gwendolyn Finefeathers, sneak back to the farm to abduct Nellie and hold her for ransom. Nellie is rescued and confesses what little there is to confess to her forgiving family and friends; Blackman and Finefeathers get their just desserts, and a rich mineral deposit on the farm solves all potential financial problems for the good guys, who live happily ever after.


We first saw John “Bart” Bartholomew playing the villain in last season’s M&M melodrama, but this year he has cleaned up his act to play the crusty but loveable Pappy Quackenbush; this gives him the opportunity to better display his fine singing voice. His vocal prowess is matched by that of Nick Hamilton (Noble Hart), who brings a hilarious naivety to his sincere, bumbling, but ultimately heroic character.


In addition to the named characters, there is an outstanding vocal ensemble well integrated into the production, and they do a lot to keep the show humming along.  A high point is their support of Sierra Kruse (Emmeline) and David Slotemaker (Iffy Cann), who give surprisingly winning performances as the two ingénues. Their big number, “Walkin’ With Emmeline,” is one of the show’s strongest songs.


Of course, no melodrama is complete without a villainous villain, and Michael Allen (Stafford) does a great job of living down to our expectations.  Vicki Brigham, who gives us a chilling and haughty Gwendolyn, nicely augments his aura of evil.

The real standout performance is delivered by Sarah Thornton (Nellie Quackenbush). Sarah completely immerses herself in her role, and she captures the audience’s hearts every time she walks on the stage. Her magical performance is only enhanced by her singing voice – she has wonderful vocal control, and her sweet voice truly expresses the sweetness of her character.


There are two more weekends to catch this fun show – please come prepared to boo, hiss, and cheer!


Mask and Mirror’s No, No, A Millions Times No! is playing at Calvin Presbyterian Church, 10445 SW Canterbury Lane, Tigard through November 24th, with performances Friday and Saturday at 7:30 and 2:00 p.m. on Sunday.

Posted by Westside Theatre Reviews at 8:51 AM No comments: