Every once in awhile it is comforting to be reminded that sin, corruption, and hypocrisy are not recent creations of a godless, materialistic present that has somehow eluded the timeless virtues of classic traditional values. Way back in 1915 Edgar Lee Masters wrote the original Spoon River Anthology, adapting a unique narrative structure in service of the occasionally depressing but eternal truth that small towns often breed small minds; people who live their lives with more concern for propriety than joy end up buried on the same hill as those who fully embrace life – but they have a lot less fun getting there.

Charles Aidman’s 1963 theatrical adaptation of Spoon River is, like the original book, a gloomily captivating glimpse of 19th century Americana, and the version presented by HART co-directors Paul Roder and Tyson Redifer faithfully captures the grim ambience of both Aidman’s and Masters’ vision. While the lighting, music, and graveyard setting all help to create the necessary mood, it is the six-person core cast that really brings the show’s eerie tone to life.

The dramatically abridged HART production does not include all of the songs and other material from the Broadway original, but it does include brief segments of original music by bassist Chris Ronek and fiddler Tamera Snelling.  Redifer and Roder have selected a very talented cast, and their choices for which actors populate each of the dozens of separate tableaus ensures steady quality across the performances. Core actors Chuck Weed, Cindy Swager, Steve Pitzel, Debbie Davis, Robbie Estabrook, and Sarah Kollars easily shift from character to character, often quietly modifying their personas along with their wardrobes upstage while other actors are momentarily the center of attention. Musical numbers are handled primarily by two extraordinarily gifted singers and actors, Estabrook and Kollars, whose rendition of  “Drunk As I Could Be” is both a musical and a comic highlight of the show.

Light Board Operator Libby Solheim does a masterful job of implementing Peter Stein’s clever lighting design. Without a single set change, the audience is able to follow the cast through the show’s many vignettes and imputed locales. The live and prerecorded music work well together, providing a consistent soundtrack to create the necessary mood. On opening night there were a few places where the canned music was a bit too loud, and the actors’ lines consequently muddied – but this can easily be fixed.

Unless audience members enter the theater already thoroughly familiar with Spoon River Anthology, the show will require some contemplation. Be prepared to enjoy the production while you are there, but to see your appreciation grow over time as you think about what you have seen. Roder, Redifer and company have succeeded in plumbing the depths of Masters’ and Aidman’s complex and challenging narrative.

Posted by Westside Theatre Reviews at 9:21 AM No comments: 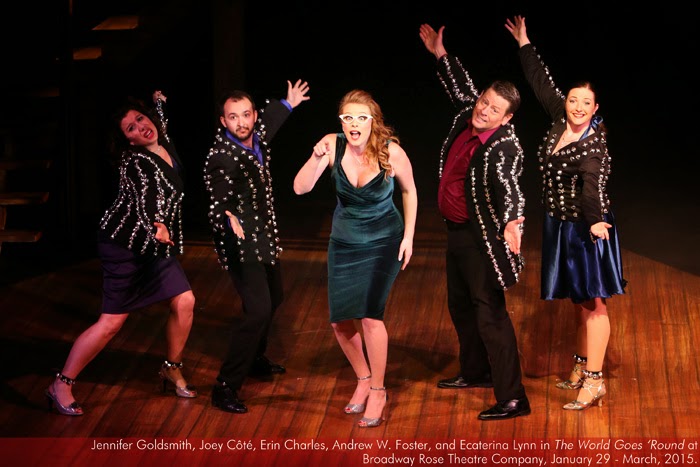 Broadway Rose general manager/director Dan Murphy is a self-proclaimed lover of revues, as any look at past seasons will attest. As reviewers, we find that there are revues, and then there are revues. The weakest ones often offer up a flimsy wraparound story struggling to support a series of musical clichés. The best bring to audiences something old, something new, and a creative flair that makes it all quite wonderful.

The current production of The World Goes Round is a celebration of the works of John Kander and Fred Ebb (think Chicago, Cabaret, Kiss of the Spider Woman and several iconic songs we didn’t even realize were taken from musicals). It is quite wonderful…

Both cast and band are beautifully suited to the demands of Kander and Ebb’s most powerful, best-known works interspersed with a less familiar body of quaintly romantic ballads and novelty songs. Jennifer Goldsmith’s wide vocal range allows her to open the show with a bang - she knocks “And The World Goes Round” out of the park, and her rendition of “My Coloring Book” explores every nuance of an already tender and visceral number.  In any battle for “best in show” Goldsmith faces fierce competition from Joey Côté, whose rendition of “Mr. Cellophane” captures all of the wry pathos of Bert Williams’ “Nobody” – and the staging of the number (especially the lighting and the band’s oddly appropriate accompaniment) perfectly complements the song’s quirky and wistful tone.

The competition is just as strong in the novelty department. The entire cast sparkles (on roller skates, no less!)  in “The Rink” – a number that also highlights the skill of choreographer Erin Shannon. Grace O’Malley’s amazing costume design helped to make second act opener “Ring Them Bells” a comic tour de force. Côté’s “Sara Lee” is lively, cute, and well-staged, but still possibly outmatched by Andrew W. Foster’s hilarious posturing, and Ecaterina Lynn’s dry delivery, of “Arthur in the Afternoon.” Foster proves that he’s got a great set of lungs under those pectoral muscles with his seductively dynamic interpretation of “Kiss of the Spider Woman.”

Among the songs that were new to us, the most memorable may be “Colored Lights” (from The Rink). Erin Charles’ poignantly restrained delivery, supported by  imaginative lighting, makes this relatively unknown gem one of the show’s highlights.

The strength of the show’s vocal ensemble shines most brightly in “New York, New York” when the five cast members, at one point, are not only singing harmony, they are singing simultaneously in four different languages. Musical director Jeffrey Childs (who does double duty as the show’s pianist) has crafted the five already accomplished vocalists into something that is so much more than the sum of its parts!

If The World Goes Round is reflective of the kind of musical revue that Dan Murphy wants to bring to Broadway Rose’s New Stage, then all we can say is “bring ‘em on.” If you love the work of Kander and Ebb, see this show. If you, like us, are not familiar with the vast majority of their work, then it is even more imperative that you take this chance to be charmed by an unbelievable songwriting duo.

Posted by Westside Theatre Reviews at 7:39 PM No comments: