Twilight Theater Company has carved out a niche for themselves by doing lots of edgy, little known plays that challenge the audience to really think about what they have seen. Simultaneously, they give local actors the chance to explore complex roles requiring them to dig deeply for both nuanced subtlety and the explosive action that sometimes accompanies their inner dialogues. Director Matt Gibson’s current production of Paula Vogel’s very dark, occasionally comic Hot ‘n’ Throbbing is classic Twilight: obscure, frequently surreal, deeply disturbing, nicely staged and skillfully acted.

Jaime Langton (“Charlene”) and Jason A. England (“Clyde”) create a bizarre, but ultimately believable, dysfunctional couple. Langton at first seems a bit too put-together and intellectual for the role of victim (or pornographer), but she skillfully devolves into the insecure dreamer trying to placate her abuser. The contrast between the external and internal is most pronounced in the scene where she awkwardly tries to seduce England in an almost childish parody of sexuality. England is probably a lovely fellow in real life, but he is terrifyingly believable in the role of violently twisted redneck; his incestuous musings about his daughter are positively chilling.

The final two performers, Benjamin Philip (“The Voice”) and Adriana Gantzer (“Voice Over”) provide a significant dose of comic relief as they portray the overly dramatized external expressions of the naïve stereotypes living in Charlene’s imagination. Gantzer’s pole dancing siren hovers nicely on the line between erotica and parody, while Philip is at his best riffing on a Philip Marlowe-style private eye, alternating from hard-boiled to intellectual (sometimes in mid-monologue).

Vogel’s script is occasionally baffling, with odd interjections that sometimes muddy the core story. It is left to the director and actors to craft a coherent and compelling drama that holds the audience during the author’s flights of obscure intellectualism (or am I the only one who doesn’t need to hear multiple passages from Moby Dick?). Despite the distractions, Gibson and his cast keep the focus on pornography, incest  and domestic violence, delivering a hard-hitting drama that shines a powerful light into some very dark parts of the human psyche.

Twilight Theater Company’s Hot ‘n’ Throbbing is playing at the Performing Arts Theater, 7515 N. Brandon Avenue, Portland through Sunday, August 20th with performances at 8 P.M. Friday and Saturday and 3:00 P.M. Sunday. There is an additional performance Thursday, August 17th at 8:00 P.M.
Posted by Westside Theatre Reviews at 10:41 AM No comments:

Catch This Gypsy Before It Leaves Town! 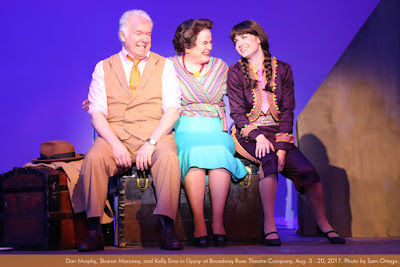 
While my attitude toward theater is generally “smaller is better,” I make an annual exception for the summer season at Broadway Rose. Their huge summer productions never fail to dazzle me, and this year’s blockbuster Gypsy is no exception. Director Annie Kaiser’s first swing at one of the company’s large-scale musicals is a home run; the show simply begs us: “Let me entertain you” – and it does.

The story is based on the memoirs of Gypsy Rose Lee, who (obsessively pushed by Momma Rose, the ultimate stage mother) rises from the vaudeville kiddy circuit to become perhaps the most famous stripper (or, as Gypsy says, “At these prices, I’m an ecdysiast!”) in history.  The show took Broadway by storm when it debuted in 1959 with the book by Arthur Laurents, music by Jule Styne, and lyrics by a young Stephen Sondheim – helped along by the power of Ethel Merman as Rose. Merman set a high bar, and mature comediennes with big voices have sought to put their own stamp on the role ever since. While Gypsy is properly classified as musical comedy, the complexity of the character and relationships (especially between Gypsy and Momma Rose) sometimes goes deep, and even dark – Momma Rose has earned a place as one of the most narcissistic and manipulative characters in all musical theater.  For readers who don’t already know and love the show, do not let this deter you – it’s very, very funny, loaded with memorable moments and great songs, and it ends on a lovely note of reconciliation.

W. C. Fields once said that you should never go on stage with children or animals, and while I’m sure this Gypsy cast would disagree, he had a point. Every time Ryleigh Hefflinger (Baby June) flounces across the stage, squeals, and kicks – and she is a world-class flouncer, squealer, and kicker – the rest of the cast seems to disappear. Rivaling Hefflinger for the scene-stealing title is Chowsie the Chihuahua, who clearly deserved but was robbed of a bio in the program. Of course Chowsie has no lines, and didn’t need to learn any blocking since he has trained the cast to carry him everywhere he needs to go, but he still gives a truly unforgettable performance. Aida Valentine (Baby Louise) masters the fine art of winning our attention and sympathy by graciously accepting her role as second-class daughter, with just the right touch of pathos to set up her emergence as a butterfly in Act 2.

Dan Murphy’s “Herbie” – who inexplicably adores Rose – creates a gentle doormat whose warmth makes him perhaps the most likeable character in the show – and I wanted to cheer when he finally had enough and walked away. Bryan Thomas Hunt’s Tulsa delivers a remarkable song and dance solo in “All I Need Is the Girl” that left me wanting more but frustrated, since he, too, walks away.

In the end, the show belongs to two women, Sharon Maroney (Momma Rose) and Kelly Sina (Louise/Gypsy). Maroney is definitely at her best when she’s playing it big, especially on the vocals, as she is a phenomenal belter. She also negotiates her character’s frequent personality shifts with aplomb, moving from bully to cheerleader, wheedler to delusional manipulator with sometimes dizzying speed.
Starting with the heartbreakingly pathetic “Little Lamb” and growing toward the swaggering strip routine, Sina gives her solo numbers a star turn that firmly establishes her place as best vocalist in the show, and her evolution from timid wallflower to the ultimate tease is a joy to watch.

Music Director/Conductor Jeffrey Childs leads his orchestra flawlessly, and seemingly has a lot of fun with some of the eccentric musical stylings designed to create the vaudeville/burlesque tone of the production. Costume Designer Darrin J. Pufall must also have enjoyed himself clothing Baby June, the Toreadorables, the cow, and of course the three wonderful strippers who introduce Gypsy to the world of burlesque.

This Gypsy gives us a great combination of humor, top-class song and dance, and sobering themes, clearly demonstrating why it’s often called America’s greatest musical. It should not be missed.