Beaverton’s “Experience Theatre Project” is a local leader in the movement to bring new audiences to the works of William Shakespeare by offering free or low-cost productions to the broadest possible audience. In keeping with this, their current staging of The Tempest has a fun steampunk style, is offered outdoors (at The Round in Beaverton) with no set admission fee ($10 donation suggested, $15 for reserved seating with a drink and dessert), and provides both sign language and Spanish interpreters. Director Jen Waters has done a great job of integrating the audience into the show, as the cast frequently moves through the seating areas and occasionally interacts directly with individual audience members. All of this makes for an enjoyable, accessible experience that will captivate adults and their kiddos. Of course the youngsters may not understand everything (realistically, few of the adults will follow every nuance!), but the movement, costumes, clowning and broad dumb show are enough to give the broad outlines of the story and keep everyone engaged.

Unless you’re a real Shakespeare fanatic, I recommend that you read the show synopsis in the program before the performance begins – a crutch I was denied since I attended the dress rehearsal. An even briefer guide: Alonso (King of Naples) and friends are shipwrecked by a huge storm, and all aboard are tossed into the sea. They arrive safely (but missing Alonso’s son Ferdinand) on an apparently deserted island. The island is actually inhabited by the exiled Prospero (former Duke of Milan), his daughter Miranda, and the half-wild native, Caliban, and several spirits. Ferdinand, who has landed on another part of the island from the rest, encounters Miranda – love at first sight! Prospero’s chief spirit/slave, Ariel, desperately wants his freedom, and Prospero offers it in return for a few small favors (primarily leading Alonso and his party to Prospero). The court jester, Trinculo, and Stephano the butler form a drunken alliance with Caliban, and vow to usurp Prospero as leader of the island.  Prospero agrees to allow Miranda and Ferdinand to marry, Ariel foils the evil plot by Trinculo/Stephano/Caliban, Alonso and his party find Prospero and are thrilled to find Ferdinand alive and betrothed, Ariel is released from bondage, and the (miraculously intact) ship carries all of the good folks home.

One great strength of the production is its physicality – the amazing simulation of the tempest by the storm-wracked passengers, Sam Schultz’s crab-like crawl as Caliban, Sullivan Mackintosh’s bawdy, staggering acrobatics as Trinculo, and Charles Grant’s leaping, soaring Ariel. Greg Barrett paints the drunken Stephano with a broad brush, and his magic trick is a real audience pleaser.  Schultz and Grant are particularly effective at creating the aura of magic and mystery essential to the tale.

The loving couple (Nicole Richwalsky as Miranda, Robert Amico as Ferdinand) express their infatuation so clearly that it doesn't matter if a few lines of dialogue are drowned out by passing trains (always a risk at the Round), and Richwalsky injects the right notes of childish, wide-eyed innocence into the role. Bill Bernsohn’s portrayal of the loving father conveys his guilt at depriving his daughter of a normal life; he also segues nicely from seeking revenge to forgiving his old rivals.
Alisa Stewart’s costumes are quite stunning – in particular, Ariel’s wings and Caliban’s terrifying mask, as well as the fantastical makeup designs on these key characters. The steampunk theme is carried out effectively on the set with a huge machine resembling a giant, mechanized, steam-belching teapot.

As mentioned above, passing trains (and ambient noise from outdoor seating at nearby restaurants) sometimes interferes with dialogue, but the production really doesn't suffer much from those obstacles. Only the reserved seating offers chairs, so I’d recommend bringing a portable camp chair if two hours on concrete or grass doesn't sound appealing. The weather may be very hot at the Sunday matinees – wear sunscreen and a hat!

Experience Theatre Project’s The Tempest runs at the Round at Beaverton through Saturday, July 8th with performances at 7:30 Fridays and Saturday, 2:00 pm on Sundays. There will be a special show on Thursday, July 6 at 7:30.  For reserved seating, go to www.experiencept.org.
Posted by Westside Theatre Reviews at 11:37 AM No comments:

Believe the Rumors About Twilight’s Latest 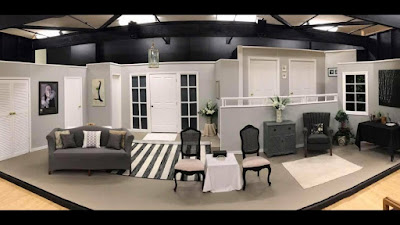 
It’s hard to go wrong with Neil Simon’s plays, but even the best script, in the wrong hands, can turn witty farce into irritating buffoonery. Rumors makes no pretense at deep social meaning, and has unapologetically slapstick elements that open the door to chaotic overacting – but Director Maury Evans and his brilliant cast have crafted Twilight Theater Company’s production of Rumors into, without question, the funniest show I’ve seen this year.

The story takes place in the living room of New York City Vice-Mayor Charles Brock and his wife Myra, who are supposed to be hosting an elegant party to celebrate their 10th anniversary.  Missing are Charles (unseen upstairs, bleeding from an apparent suicide attempt gone awry), his wife Myra, the couple’s household help, and all of the expected trappings of a dinner party, including the food (other than a well-sealed bag of pretzels and a well-stocked bar). In classic drawing-room comedy style, the first arrivals (Charles’ lawyer Ken and his wife Chris) madly endeavor to conceal the situation from the next three couples, hoping to avoid a scandal. As new people gradually arrive the cast makes liberal use of five doors – a sixth is curiously ignored. Slowly, the other couples learn bits and pieces of the story, adding their own interpretations and rumors to a tale that grows increasingly complex and culminates in the utterly absurd version recounted to the police.

Despite the absence of in-depth character development in the script, each actor quickly develops a distinct personal style that defines the cast member’s social status, personal neuroses, and relationship to the others.  Evans’ decision to cast Greg Saum as Cookie, the flamboyantly zaftig cooking show host, was inspired – the contrast between the over-the-top Cookie and her worshipful but introverted psychiatrist husband Ernie (nicely underplayed by Andy Roberts) sets up some of the show’s best moments.  Another power couple, Glenn (Ian Leiner) and Cassie (Amanda Anderson) bickers incessantly, primarily about Glenn’s focus on every woman he sees except his wife. Leiner finds a fine balance between button-down politician and lecher, using his eyes to tell a story otherwise denied, and Anderson’s shift from neglected harpy to seductress is hilariously convincing.

Rob Harris gives “Ken” a bug-eyed, barely controlled hysteria, his frenetic hand movements telegraphing the frenzy bubbling just below the surface. Alicia Turvin (as Ken’s wife Chris, also a lawyer) is utterly flustered, expressing her anxiety through her all-consuming need for a forbidden cigarette to calm her nerves. The final couple, Lenny and Clair (Richard Barr and Laura Myers) anchor the show with their sterling performances. Myers carefully negotiates the challenge of getting progressively drunker throughout the evening without becoming sloppy – her diction, bearing, and gossipy motor mouth remain consistent as she steadily downs a series of drinks (many intended for other characters). Barr is a classic candidate for anger management, always on the brink of an explosion but never venturing too far, until his spectacular final monologue. This masterpiece of comic timing left the audience, although weak with laughter, strong enough for the solid round of applause he so richly deserved.

Scott Miler’s set design functions like another character, immediately clueing the audience in to the cleanly elegant ambience of the era and locale while providing (in a remarkably small space) the levels and portals necessary for the show’s complex physical comedy, and Chris Byrne’s costumes skillfully complement each character’s personal style.

Nothing I write can begin to capture either the comedy on stage or the audience’s robust reaction. If you share my conviction that laughter is particularly essential in trying times, then this is one of those shows you’ve just got to see – perhaps more than once!

Some classic plays, no matter how engaging, can grow stale with endless repetition.  120 + years after its debut, this is still not an issue with Oscar Wilde’s incessantly ironic, tightly written The Importance of Being Earnest. While the original play is set in late Victorian London, modern directors frequently place it in different milieus – in recent years I have seen it done in the post-Civil War American South, and (in Theatre in the Grove’s current production) back in London, but in the 1930s. Director Jess Reed and her cast (despite a few opening night line-bobbles) show how seamlessly the show can move from era to era, place to place - a testament to the universal relevance and appeal of this superb farce.

Wilde acknowledges with his subtitle: A Trivial Comedy for Serious People, that the story is quite silly. Aristocratic bachelor Algernon languishes in a decadent life with his best friend Ernest, until he learns a shocking secret: both he and Ernest are leading double lives – Algernon frequently flees London to visit a fictitious ailing friend, “Bunbury”, while Ernest is really the upstanding Hertfordshire gentleman Jack Worthing, guardian to the lovely Cecily. Immediately intrigued, Algernon schemes to meet the girl. Jack, meanwhile, is in love with the aristocratic Gwendolen, who shares his passion but believes him to be Ernest. Add Gwendolyn’s tightly wound mother, Lady Bracknell (who is also Algernon’s aunt) to anchor the plot, and Wilde’s wit is launched on all of the foibles of an empty upper class.

The unusual decision to cast a woman (Anne Kennedy) in the role of Algernon really works. Physically, Kennedy’s fantastic hairdo and tightly stuffed suits support the illusion, and her lines are spoken in a gender-free vocal register. However, it’s really Kennedy’s delivery that sells the role, and there’s something really appealing about watching this woman play the part of the jaded wastrel. Her comic timing is spot on, and she does a nice job with the accent. Mark Putnam (as Jack/Ernest) is a perfect foil – upright, dry, acerbic and even avuncular at times. While Kennedy is frequently sprawled on any available couch (inhaling every muffin in sight), Putnam stands ramrod straight, and delivers even his funniest lines with a slightly fussy gravitas.

Tonja Schreiber’s “Gwendolen” is forthright and brassy – there’s more than a touch of her mother in this determined young lady. She contrasts nicely with Lindsay Partain’s “Cecily” – a bubbling, enthusiastic ingénue eager to trade her sheltered life for a passionate alliance with Algernon. And then there’s Pat Lach’s “Lady Bracknell” – a ferocious social doyenne whose humble origins are no barrier to her savage snobbery. Her crisp delivery, upright carriage and amazing hats all reinforce her ironically self-righteous embrace of social conventions.

James Grimes’ set design is lovely, and really captures the Art Deco feel necessary to create the feel of the 1930s. Flori Lima-Steele’s costumes (especially the hats mentioned above) further enhance the period feel and define each of the characters.

Director Reed, her production team, and cast have crafted a really funny, very fresh production of Wilde’s classic that should appeal to all fans of social commentary cloaked in razor-sharp wit.

The Importance of Being Earnest is playing at Theatre in the Grove, 2028 Pacific Avenue, Forest Grove through June 18th, with performances Friday and Saturday at 7:30 p.m. and Sunday at 2:30 p.m.
Posted by Westside Theatre Reviews at 9:18 AM No comments: