TITG Does a Big Job on “The Little Mermaid, Jr.” 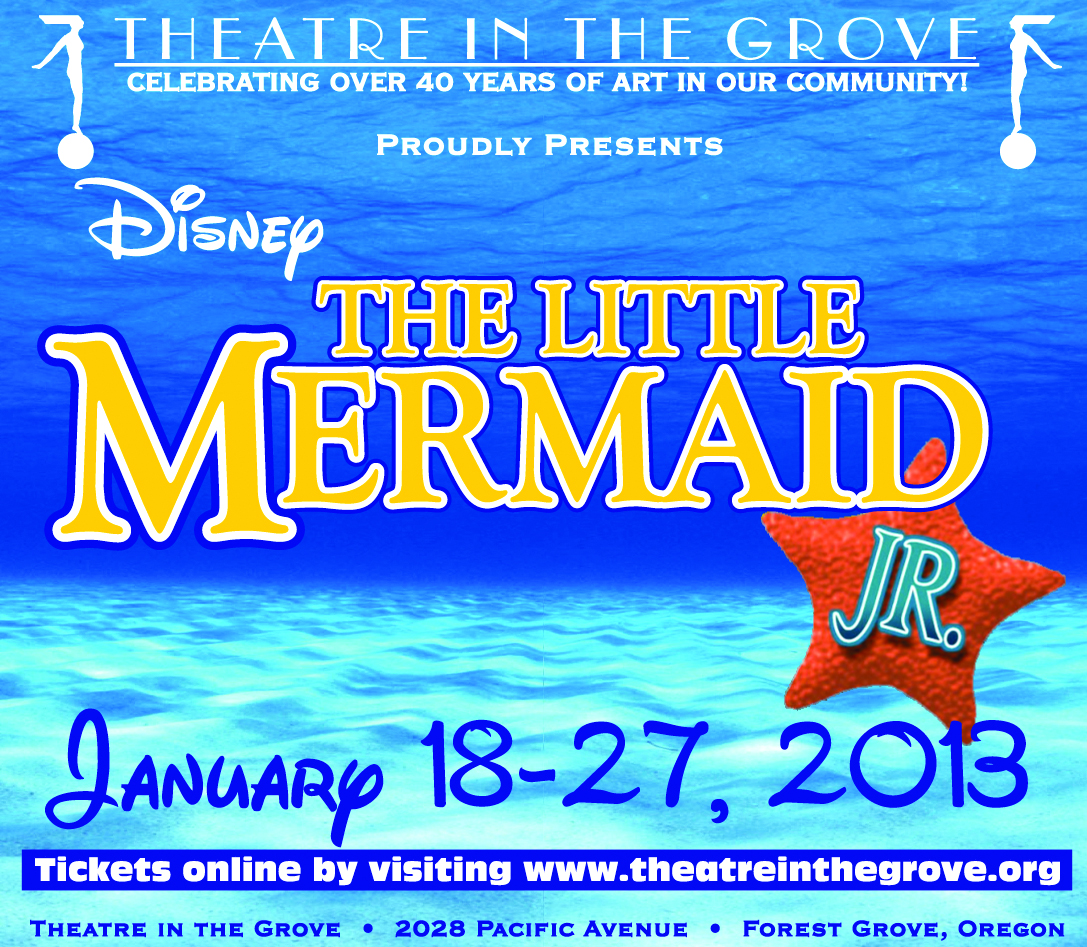 In addition to its regular community theater offerings, Forest Grove’s Theatre in the Grove offers educational youth theater programs and productions to bring the next generation of actors and audiences into the fold. “The Little Mermaid, Jr.” is one of a series of children’s theater standards that has been condensed from its original format to facilitate and maximize the opportunities for kids to get involved. While these plays do, inevitably, lose something in translation, they are still a great vehicle to serve as an introduction to acting and stagecraft for children.

Because of an error on a third-party website, we missed the first 45 minutes of the show, and we apologize if we inadvertently slight some performers. When we walked in almost half-way through the show, we were struck by the fact that we were lucky to find two empty seats (and these were near the back of the theater) – the audience turnout was spectacular, and the cast’s enthusiast performance was matched by the audience’s equally enthusiastic response.

The cast is simply huge – by our count, almost 60, all young people (some of them very young, indeed!). This could have led to utter chaos, but instead (thanks to director Jeanna Van Dyke and her able crew) the audience is treated to finely controlled chaos (think Keystone Kops) as small schools of children (pun intended) swim, skate, glide, and pound the boards of the stage and aisles. Especially riveting is the number where a manic herd of tiny sous chefs pursue Sebastian (David Van Dyke), knives flailing, in their efforts to include a touch of crab in the evening’s repast. Evan Tait delivers a strong and menacing performance as Chef Louis, as well as tackling the key role of King Triton. As the Little Mermaid herself, Ariel, is silent for most of the latter part of the show, we weren’t able to hear much of Emily Upton’s voice. However, what we heard was lovely, and she does a great job of wordlessly expressing herself, especially in the scenes with Prince Eric (Avery Cackler).  Tiare Zijdemans (as King Triton’s sister, the evil sea witch Ursula) is in full voice throughout, and her strong and strident vocals effectively convey her character. Both Ian Romig (Grimsby) and David Van Dyke (Sebastian) are audience favorites who put a lot of hard work and energy into creating their comic roles.

Special recognition is definitely due the costume crew, who have done a great job assembling the myriad costumes required by a cast of mermaids, fish, crustaceans, roller-skating electric eels, seagulls, and other assorted creatures of land, sea, and air. The sets are attractive and effective, simple enough not to interfere with the cast members as they maneuvered around the stage with legs, fins, feet, and boats. The sound is handled well for principal characters, all of whom are audible and clear – and the choral numbers, many utilizing the entire cast, provide some of the show’s best moments.

Posted by Westside Theatre Reviews at 9:21 AM No comments:

“CHEAPER BY THE DOZEN” – Large Cast for the Price! 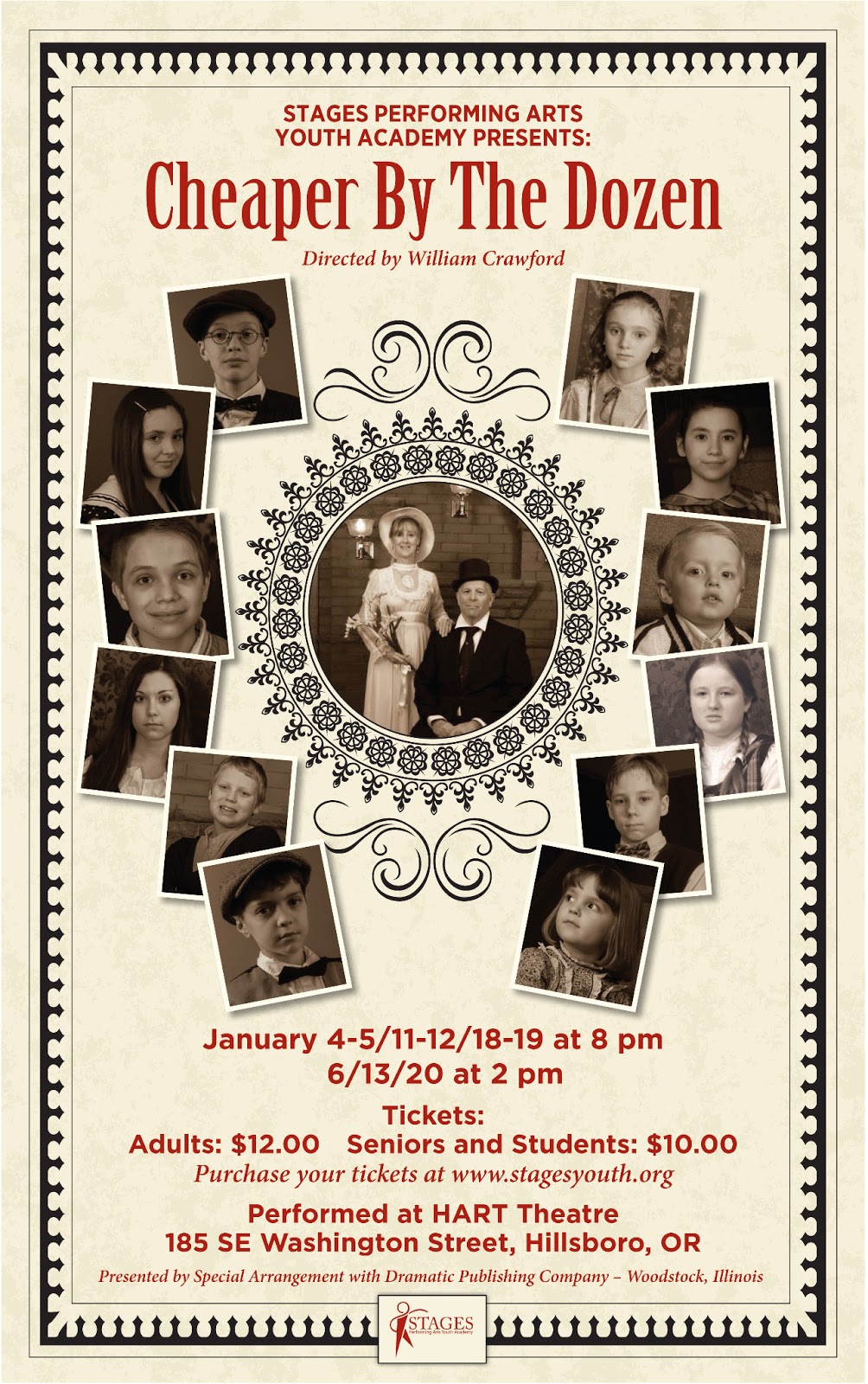 
It’s always fun to attend a production by a group we’ve never seen before, and doubly so when it’s youth theater. As lovers of live performance, we are concerned with the development of the next generation of stage actors and audiences – and groups like (STAGES) are invaluable on both fronts. With its huge cast of children, “Cheaper By The Dozen” is an ideal vehicle for showcasing youth talents in acting and all other aspects of live theatrical production (the stage manager is a 12-year old!).


The play is an adaptation by Christopher Sergel of the book by the same name (authored by Frank B. Gilbreth, Jr. and Ernestine Gilbreth Carey), and deals with the period immediately preceding the death of efficiency expert Frank Gilbreth, Sr. The story revolves around the twelve Gilbreth children (hence the title) and their relationships to each other, their parents, and the outside world. Despite the huge size of the family and the parents’ constant focus on efficiency, the Gilbreth clan is painted as a loving unit with the flexibility needed to accommodate so many individuals. As the children (especially the older daughters) approach maturity, there are inevitable conflicts (Frank Sr. jokingly reprimands his wife for ignoring his request that she bear only boys, as he has little experience with adolescent girls!).


The few adults in the show (Donald Cleland as Mr. Gilbreth, Beth Self as Mrs. Gilbreth, Cindy Bartell as Mrs. Fitzgerald, and Scott Rushford as Dr. Burton) are effective anchors for the show’s real stars, the children. Director William Crawford maximizes the opportunities for youthful actors by using them not only as children, but in several adult roles. The entire youth ensemble displays a cohesive professionalism (not easy with so many people on a small stage!), but there are too many of them to recognize each individual. However, we must recognize the standout performances delivered by the trio of elder daughters, Hannah Solheim (Anne), Frankie Woodman (young Ernestine), and Hannah Wilson (Martha). Of course, whenever they are visible, ParkerPup (the $5.00 Dog) and 2 ½ year old Grant Davis (Robert, the baby of the family) steal the show.


Director William Crawford is a man of many talents. In addition to assembling and organizing an enormous group (21 humans, one dog) into an effective cast, he also designed and helped built the attractive and very functional set. The show moves smoothly, with very few lapses in the action. Certainly the speed with which all of the children can be assembled on stage (it varies between 9 and 14 seconds!) reflects the show’s efficiency expert pedigree!


While the show is enjoyable on its own merits, more important still is the role that STAGES is playing in the early introduction of children to the multiple facets of theater arts. Many of the cast members have studied theater with Donald Cleland, and they must have taken special delight in being able to share the stage with their mentor. As arts education continues to dwindle in the K-12 school system, it is especially important for the entire community to support programs that promote youth theater.

“Cheaper By The Dozen” is playing at the HART Theatre, through Sunday, January 20th with 8:00 p.m. performances on Friday and Saturday and a 2:00 matinee on Sunday.

Posted by Westside Theatre Reviews at 9:31 AM No comments: