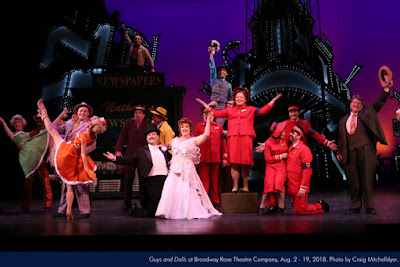 I confess – I am an ardent, almost rabid fan of Loesser, Swerling and Burrows’ Guys and Dolls. The show made its Broadway debut in 1950 and received the Tony Award in 1951 for Best Musical (as well as being chosen for the Pulitzer Prize the same year, an award that was never granted because the House Un-American Activities Committee disapproved of Burrows’ politics). In terms of play structure, interwoven story lines, and integration of music with book, it is as close to perfect as a musical can be (at least in my opinion). In addition, the great songs all fit exactly where they are placed, and the dance numbers correspond just as closely to the demands of the tale. Consequently, I set a high bar – a VERY high bar - for any theatre group that ventures to present this paragon. Opening weekend, Broadway Rose laid down the gauntlet for all other local troupes.  The synthesis of vocal ensemble, blocking, acting and choreography is so good that at the end of Act II’s “Sit Down, You’re Rockin’ the Boat” I leaned to my neighbor and whispered, in all sincerity and with just a touch of melancholy, “I will never see this number done this well again.”

Guys and Dolls is adapted from some of the short stories of Damon Runyon, and follows the stories of two interconnected couples in the New York underworld of the twenties and thirties.  Nathan Detroit, the promoter of a long-running floating crap game, needs a place to hold the game, and he needs to hide the game’s existence from the disapproving Adelaide, his showgirl fiancée of 14 years. Enter Big Jule, a Chicago mobster insistent on finding a game, and Sky Masterson, a high roller who will bet on almost anything – but not marriage. To finance a locale for his crap game, Nathan bets Sky that he cannot talk local missionary Sarah into a quickie visit to Havana. As the tale follows the fates of the two couples, bound up in the fate of the failing Save A Soul mission, good conquers evil and love conquers all.

One flaw common to many Guys and Dolls productions is the casting of a Sky Masterson who can sing the role, but who just doesn’t capture the “bad boy” charm needed to make the romantic bonfire with Sarah credible. The choice of Ryan Reilly for the role is inspired – he is drop-dead handsome, with a just a touch of danger – all women want him; all men want to be him.  He claims not to believe in lasting love, but in “I’ll Know” he signals he’s ripe for a fall, and by the time he delivers his exquisite rendition of  “My Time of Day” it’s clear that he’s beyond redemption. Dru Rutledge (Sarah) is a worthy adversary – feisty, independent, superficially righteous but obviously intrigued by the hint of a world beyond her mission even before she tastes her first Dulce de Leche. Rutledge’s gorgeous soprano voice is always impressive, but is at its best in “If I Were a Bell” and “Marry the Man Today” when she suppresses her superb operatic training into a more relaxed delivery.

Joe Theissen and Emily Sahler are flawless as Nathan and Adelaide. Director Sharon Maroney made the interesting (and immensely satisfying) decision to allow them to fulfill their roles as the show’s comic leads without turning them into over-the-top cartoon characters with absurdly exaggerated Brooklyn accents. Both renditions of “Adelaide’s Lament” are appropriately pathetic, but Sahler retains her dignity throughout, and her “Sue Me” duet with Thiessen works in part because Nathan is played as sincerely love-struck, despite his history of deception and the unusually long engagement.

While there are no weak links in the ensemble, two performances demand special recognition. Margo Schembre’s portrayal of the seemingly upright and uptight General Cartwright is a comic jewel. It’s a cameo role, but she makes the most of it as she coyly flirts with Sky and the other gamblers. Brandon Weaver’s loveable Nicely-Nicely earns the hooting and hollering at his final bow for his amazing lead vocals from “Fugue For Tinhorns” at the start of Act I through the previously mentioned “Sit Down, You’re Rockin’ the Boat.”

The powerhouse vocal ensemble work is rivaled by Maria Tucker’s equally energetic choreography, especially in concert with the always wonderful orchestra in “Havana” and “Crapshooter’s Dance.” The result is a colorful, energetic tour de force of the best of musical theatre. In her Director’s Note, Sharon Maroney says she’s wanted to produce and direct this show for 27 years.  She should be very, very proud. Friday night’s standing ovation is a testament to a remarkable achievement  - do not miss this high point in her already illustrious career.

Posted by Westside Theatre Reviews at 9:01 AM No comments:

The streets of Portland were sizzling last Saturday night, but inside the Twilight Theater stage provided fierce competition, as Venus in Fur started out cool, gradually moved through simmer, then 90 minutes later closed at a full boil. Playwright David Ives’ compelling mixture of comedy and eroticism has been entertaining, disturbing, and disorienting audiences since its 2010 debut, and Twilight director Alicia Turvin has done a superb job of steering the two actors through a non-stop roller coaster ride of a script.  Twilight’s theme this season is “The Play is the Thing” and Venus delivers a three-fold dose with a play within a play about a play.

Begin with Austrian author Leopold von Sacher-Masoch’s 1870 novel, Venus in Furs. Without going into too much detail, suffice it to say that Sacher-Masoch is the cheery lad who gave us the “Masoch” part of sadomasochism. Fictional playwright Thomas has written, and is now casting, a play based on Venus in Furs – but he’s having a tough time finding just the right actor to play the role of Vanda, the proper young woman who overcomes her initial distaste and enthusiastically embraces the role of dominatrix. Thunder, lightning, and voila! In walks a woman coincidentally named Vanda – and at first glance she could not be less appropriate. She’s a couple of hours late, brash, disorganized, angst-filled, frantic, seemingly lacking every quality Thomas seeks – her only redeeming quality is her persistence. Refusing to take “no” to her demand for an audition, she sheds her rain-oaked attire and awkwardly wrestles her way into a Victorian dress. The dramatic transformation captures Thomas’ attention, and he agrees (reluctantly – he’s a playwright, not an actor) to read a scene with her. Vanda’s surreal entrance presages a fascinating exploration of obsession, power, and gender roles, a closed world where Thomas and Vanda first become the characters in the play, then gradually reshape the play to fit the actors. When Vanda insists that the male lead, Severin, be called Thomas, it becomes clear that the lines between theatrical and real life roles are starting to blur. In addition to shifting sexual dominance, the powerful positions of author and director begin to shift, and what starts as humorous interplay between the two becomes deadly serious.

Jeff Giberson (Thomas) and Jaiden Wirth (Vanda) lead the audience on an emotionally exhausting trip through the physically and mentally demanding story. Wirth is physically perfect for the role – her sveltely muscular body is tantalizing, but not voluptuous, and she wields it as a comic, dramatic, and flat-out sexual weapon. She is hilarious as the desperate klutz, even when stripped to bra and panties - which makes her transformation into hyper confident femme fatale particularly stunning. Giberson navigates an equally challenging path; as Vanda spurs him into growing self-awareness, he must transform himself from the all-powerful author to quivering, sweating victim of his own desires. Most important, both Wirth and Giberson fully commit at every stage of the play – as they lose track of the distinction between actor and role, they bring the audience into their journey.

Lighting designer Robin Pair and light and sound operator Spencer Wallace keep what could be a static single set constantly alive, as flickering lights and the off-stage storm first define the comic elements and later emphasize the characters’ utter isolation from any objective, outside reality. Alicia Turvin developed a clear vision of the incredibly intricate characters, story line, and under her direction the cast and production team fully deliver the eroticism, humor, and suspense of David Ives’ quirky play.

Despite the absence of actual nudity or overt sexual activity, the play is definitely not appropriate for younger audiences (or for adults who are uncomfortable with overtly sexual themes). Beyond that cautionary note, I unqualifiedly endorse the production – it is a perfect fit for Twilight’s generally sophisticated, edgy approach to community theater!

Twilight Theater Company’s Venus in Fur is playing at the Performing Arts Theater, 7515 N. Brandon Avenue, Portland through August 12th with performances at 8 P.M. Friday and Saturday and 3:00 P.M. Sunday. There is also an 8:00 P.M. performance on Thursday, August 9th.

Posted by Westside Theatre Reviews at 12:27 PM No comments: