Streaming Now -The Story of My Life 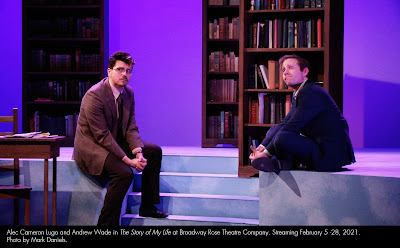 To fill the seemingly endless months until local stages are able to commit to full theatrical productions for live audiences, Broadway Rose has chosen a different path from most local companies. By selecting small-cast shows (2 to 4 characters), simple sets that create the illusion of close interaction while keeping the actors nicely distanced, minimizing the number of musicians on stage, and capturing it all with a carefully edited three-camera shoot, they are managing to stream a solid, if unorthodox, season safely into the homes of their loyal fan base. So far, the results have been gratifyingly spectacular. Their newest offering (third in the series, with two more planned in coming months) is The Story of My Life, a quiet, quirky little musical about friendship and love by Brian Hill (book) and Neil Bartram (music and lyrics).

The story revolves around Thomas Weaver (Alec Cameron Lugo) and Alvin Kelby (Andrew Wade), childhood friends who, when they were twelve, made a pact that when the first of them died the other would write his eulogy.  Alvin has unexpectedly died, and Thomas, now a prize-winning author, returns to their small home town to fulfill that promise – but is suffering from a serious case of writer’s block and just cannot find the words. Alvin appears and, with a nice mixture of dialogue and song, guides Thomas through the stories that defined key moments in their relationship and their lives. The script is sometimes sentimental, sometimes witty, sometimes dripping with irony – but under the careful direction of Sharon Maroney, Lugo and Wade deliver 90 minutes of a consistently engaging show that delivers a nice emotional punch.

While the relationship between Thomas and Alvin is distinctly non-sexual, it is clear that they love each other (despite Thomas’ horrified response when Alvin asks him to write “how much I love him”). As the stories they recall move them through adolescence, the utterly conventional Thomas starts to criticize Alvin’s dreamily fey, unorthodox style. In one of the show’s pivotal songs, “Normal,” Thomas ultimately asks him (as they enter high school) to fly under the radar and try to fit in – but of course that’s just not an option for a kid like Alvin. The authors’ intentional ambiguity about their characters’ sexuality spares The Story of My Life from being boxed in as a single message play – the pressures of conformity have sadly driven most of us into leaving friends behind who should have been cherished rather than rejected.

On first viewing Wade’s “Alvin” is immeasurably more appealing than Lugo’s “Thomas” – not a criticism, as the characters were written that way. However, one of the advantages of Broadway Rose’s 48-hour viewing window is that the shows can be seen more than once – and this play really demands a second visit. I watched it first on a big-screen TV, where I got a macro-view of the characters and the story – but the second time I watched it up close on a my Mac and, knowing what was coming next, caught a huge range of nuance in each character’s performance. Both actors are utterly convincing when portraying their childhood selves – there is none of the awkward overacting sometimes seen when adults play children.

The show’s 17 musical numbers are not really songs – they are more dialogue essential to the story, fully integrated with spoken word but delivered with musical accompaniment.  Both Lugo and Wade are strong vocalists, but it is really their ability to intersperse word with song, mastering the timing to flow seamlessly between the two, that sells the numbers. For a study in contrast, watch Lugo’s character develop from the eccentric, Charley Brown-like delivery of “1876” vs. his adolescent plea in “Normal” and the imaginative “The Butterfly.”  Nowhere is Wade’s powerful voice demonstrated more than in the pivotal “Independence Day” – a complex number that carries unmistakable overtones of Sondheim.

In deference to the pandemic, the “orchestra” consists of Jeffrey Childs on piano – and with someone as deft as Childs, there is no point where more is needed. The camera work is beautiful, and the editing so seamless it looks like the show was all filmed in one take.

Because of mature themes and mild profanity, the show is recommended for ages 13 and up. With that small caveat, I can recommend this production to anyone who loves and misses musical theater – it may not be live, but it’s much better than Memorex.

The Story of My Life is available on video from the Broadway Rose website.  Purchase now to stream through February 28th - $25 buys you 48 hours of unlimited viewing within a single household.