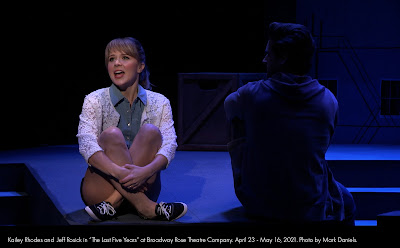 As we (am I being too optimistic?) approach the final act of Covid-19, Broadway Rose Theatre Company is offering the third of their planned series of safe, socially-distanced “live” musicals on video, for streaming to audiences at home. Like the two previous productions, Jason Robert Brown’s The Last Five Years has a tiny cast, few musicians, simple sets, and is perfectly suited to the intimacy and camera potential of the video format.  Unlike bigger musicals, there is no place for vocal choruses and elaborate choreography – just two characters living out a five-year relationship in their heads, with only one moment of chronological connection in the entire show. I can’t think of a better time to reflect on loneliness, alienation, and abortive attempts to find love.

The story covers a five-year period in the lives of Jamie, a young writer who unexpectedly, quickly achieves serious literary recognition, and Cathy, an aspiring actor whose career definitely fails to launch.  Jamie tells his part of the story from the beginning of their relationship and first blush of passion/love, through a brief marriage, ending with the final breakup. Cathy does the reverse – she starts at the end, her heartbroken moment of acceptance that Jamie is permanently gone, and traces the relationship back to its heady first days. While the actors share the stage for just under 90 minutes and sixteen songs, the two physically intersect and interact only at the time of their engagement and marriage.

The Last Five Years is not a pretty show, and Jeff Rosick (Jamie) and Kailey Rhodes (Cathy) face challenging roles where they are creating two superficially attractive, but fundamentally flawed characters through the medium of song. Initially, Jamie’s barely-post-adolescent cockiness (contrasted with Cathy’s pain) casts him as the bad guy, and Cathy as victim, and we are reminded throughout the narrative that he is an egotistical cad. However, learning Cathy’s story in reverse gradually builds a picture of a needy, naïve woman/child who plays a big part in the relationship’s demise. When juxtaposed with Cathy’s plaintive “I’m Still Hurting,” Rosick’s gleeful “Shiksa Goddess” is funny (Rosick is a consummate physical comic) but appallingly callow.

It’s hard not to be on Team Cathy – Rhodes creates an impossibly cute character, a pro at putting on a happy face – but she gives us several glimpses of a darker inner world. One of my favorite moments in the whole show is the brief flash of anger as she stalks off from a really brilliantly executed audition scene, and  “A Summer In Ohio” allows Rhodes to display both sides of her character – a winning and hilarious surface thickly plastered over plaintive undertones. Rosick partially redeems his character with a lively and sincere rendition of “The Schmuel Song” – once the context is clear (a tricky feat when the show is simultaneously going forwards and backwards) we understand how much he wants Cathy to be the happy, confident Shiksa he fell in love with.

The challenging vocals add another layer of complexity in a show that is virtually all song, and both Rosick and Rhodes excel at hitting the right notes in a score that dances on the edge of pretty but constantly inserts discordant themes (much like the characters).  Music director/pianist Brian Michael, ably assisted by Eric Toner (guitar), Amy Roesler (bass and violin) and Quinn Liu (cello) provide solid backup for the actors and take us on some soaring musical flights.

Special props to the marvelous camera work by a video team led by Mark Daniels, with Rob Lindemann and Jerry Rousselle. While live theaters are mostly dark, one saving grace is the ability of the camera to deliver close-ups at key moments and to carefully direct our attention (the other saving grace, imho, is the opportunity with to watch and rewatch favorite scenes!).

Director Sharon Maroney and the entire Broadway Rose family have once again delivered a compelling evening of theater that can be safely enjoyed at home. Until Portland’s vast and diverse theater scene is able to reopen, The Last Five Years is the best ticket in town, and you can have the best seat in the house!

The Last Five Years is available on video from the Broadway Rose website.  Purchase now to stream through May 16thst - $25 gets you 48 hours of unlimited viewing, so you can share it with the folks in your bubble (household) for two days!