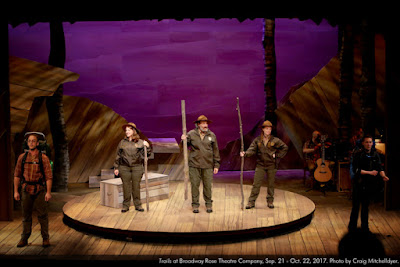 
The Appalachian Trail stretches all the way from Georgia to Maine – about 2200 rugged miles of hiking. The road from germination to fruition for a piece of live theater is, in its own way, every bit as long and rocky as the Appalachian Trail. Broadway Rose’s production gives a huge boost to Trails, a new musical by Christy Hall, Jeff Thomson, and Jordan Mann – while allowing the audience to feel like they’ve gotten in at the start of an emotionally captivating dramatic work. Although we are not in on the earliest stages (the play has evolved through performances in New York and Issaquah since 2010), it still retains just a hint of the flavor of a work in progress, and one imagines the authors sitting in the theater busily scribbling notes about dialogue, lyrics, timing, pacing, musical arrangements, and audience reaction at every performance. That said, I can’t imagine that the authors would find many cringe-worthy moments in Director Brian Shnipper’s moving and evocative staging of their show.

Trails tells the story of Mike, Seth, and Amy, friends since childhood. The actors portray the three as children, teens, and (after many years of estrangement) in the present time. Long estranged, Mike comes back to town and he and Seth decide to complete a boyhood dream of hiking the entire Appalachian Trail. The two set out on a journey of 6 months, often bickering like children while confronting the demons of their pasts and gradually repairing their broken friendship. Along the way, they meet some forest rangers and a few other hikers who help them to define and clarify the next acts of their lives. It’s not, of course, that simple – Amy pops in and out of the scene and we learn that the friendship was also a love triangle, while Mike and Seth explore their respective feelings of loss (through abandonment and death). The other hikers illustrate the values of lives fully embraced, helping the men to see that at the age of 34 they are half way to 68, but it is not too late for them to shed the shackles of the past and begin to develop and realize dreams for their futures. I will graciously overlook the fact that they see 68 as being old; when I was 34 I undoubtedly felt the same way!

As always with Broadway Rose, the vocals, music, and arrangements are beautifully executed – the harmonies are elaborate and powerful, and the sometimes haunting, sometimes upbeat solos allow each character a full range of expression. Each of the three forest rangers is given a second part (with vocal solo) that directly addresses the story’s themes. Two fine numbers are by a couple of gutsy, confident women who have each found the courage to grab the lives they want. Quinlan Fitzgerald (“Ranger Molly” and “Faith”) simply bubbles with glee about her impending engagement, and her “Places In Between” is a spine-tingling anthem to love, beauty, and the ability to not just live, but to revel, in the moment. Danielle Weathers (“Ranger Rhonda” and “Mama Harley”) is equally stunning delivering “The Road Is My Home” and her free-spirited plea that we must not mire ourselves in the past when there is so much world out there to be seen. The messages might seem hackneyed in dialogue, but they have amazing resonance and endurance when expressed in song. Kevin-Michael Moore  (“Ranger Dan” and “Virgil”) illustrates the alternative in his gravelly, mountain man rendition of “Purgatory Blues,” a boozily hard-hitting tale of his search for escape from past pain through sweating out the trail.

Of the three principals, Rachel Lewis (“Amy”) does the best job of switching from between childhood and maturity – just picking up a stick or donning an imaginary tiara is all it takes for her to become the bossy little girl who has set the whole show in motion. Her clear soprano flawlessly captures the intersection between dreams and reality in the lovely “Miles of Time” and we have no trouble understanding why both Seth and Mike are ensnared by memories of this charming woman/child.

Michael Morrow Hammack (as the overachieving lawyer “Mike”) and Joel Walker (as the home-bound underachiever “Seth”) are a little harder to buy as young boys, but since most of their stage time is dedicated to their adult relationship it’s really not a problem.  Hammack’s “The One That Got Away” tells a ubiquitous tale of lost love with painful honesty and directness; we can all relate to his plaintive “and I’m missing both the lover and the friend.” Of all the characters, it is Joel Walker’s “Seth” who most tugs at our hearts as he works through a lifetime of loss and of lost opportunities – he mixes anger, despair and bereavement to create a truly memorable character.

The band (under the direction of pianist Eric Nordin) is superb, and they move easily through the shows shifting musical genres. Much of the play’s magic derives from the vision of director Shnipper, scenic designer Emily Wilken (the set is truly lovely, and the rotating platform a perfect way to allow for long hikes on a short stage) and Carl Faber’s often breathtaking lighting design.

As mentioned before, this is a new play – while it is fine in its current form, some song lyrics are a bit simplistic or weighed down with forced rhymes (“loam” is something of a stretch when paired with “home”). That said, the Broadway Rose take on Trails is well worth a visit; the evocative music and siren call of the open road more than compensate for any minor issues.


“Trails” is playing at the Broadway Rose New Stage Theater, 12850 SW Grant Avenue, Tigard through Sunday, October 22nd with performances at 7:30 pm on Thursday, Friday and Saturday and 2:00 pm matinees on Saturday and Sunday. An additional performance will be held at 2:00 pm on Thursday, October 19th.
Posted by Westside Theatre Reviews at 9:02 AM