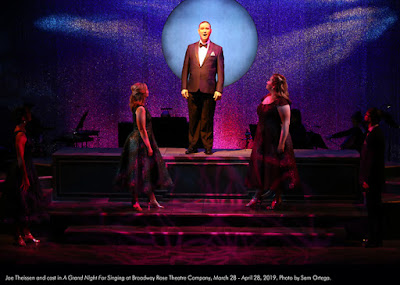 I am hopelessly enamored of much of the work of Richard Rodgers and Oscar Hammerstein – the stage musicals, the movies derived from some of their biggest hits, the songs, the themes – and thus entered the opening night performance of Broadway Rose’s A Grand Night for Singing shamelessly biased toward the production. Miraculously, Director Sharon Maroney and her team still managed to exceed my lofty expectations. The review wastes no time on exposition, makes no effort to provide show-specific sets, costumes, or context – and is thus able to pack 36 numbers (representing 39 songs, courtesy of a few medleys) from eleven Rodgers and Hammerstein musicals. In just over two hours, we were treated to five wonderful vocalists, accompanied by Music Director Jeffrey Childs’ marvelous musicians, presenting a variety of songs from Allegro, Cinderella, Carousel, Flower Drum Song, The King and I, Me and Juliet, Oklahoma, Pipe Dream, The Sound of Music, South Pacific, and State Fair – and I loved every minute. Special thanks to Dan Murphy for his curtain speech, where he pointed out to the audience that it is not a sing-along, and thus that the audience should consider it a grand night for listening – as it most certainly was.

The selection of shows and songs is somewhat counterintuitive – instead of a compendium of Rodgers and Hammerstein’s greatest hits, performed as they might have been in the original shows, the review is seasoned with works from several lesser-known musicals. Even on the most familiar standards, gender switches help to frame iconic songs in an intriguing and original context that allows for a new appreciation. “Honey Bun” – a song designed for a woman pretending to be a man, sung by a man? Revolutionary!  The first verse of “Kansas City” sung by a woman? Will Parker would be shocked! “How Do You Solve a Problem Like Maria” takes on a whole new slant when a guy in a tux replaces Mother Superior. Part of the fun for me was comparing the evening’s performances with the songs as I remember them within their full shows – don’t miss “Shall We Dance” and “This Nearly Was Mine” removed from their ethnic overtones, yet still evocative of the authors’ courageous willingness to tackle racial issues in their stories.

The vocal work is exquisite – lush harmonies, powerful solos, witty and original arrangements all conspire to keep the audience fully engaged. Caitlin Brooke’s just short of over-the-top take on “I Cain’t Say No” is beyond wonderful, and the “Stepsisters’ Lament” duet with Kelly Sina is a great showcase for both actors’ considerable comedic chops.  However, the women’s’ comic numbers get some serious competition from Joe Theissen and Joey Côté, whose “Don’t Marry Me” is staged and sung flawlessly. The light-hearted creativity of the marching band at the end of “Kansas City” is a perfect finale to one of the evening’s best numbers, but the show just keeps growing as Deborah Mae Hill follows with her powerful yet plaintive take on “A Hundred Million Miracles.” When the company sings together, there are lots of spine-tingling crescendos that make you look for the rest of the choir – there’s just no way five vocalists should be able to produce a sound that rich.  Half-way through “Some Enchanted Evening” I decided that life would not be complete until I saw Joe Theissen play Emile de Becque, a decision confirmed near the end of Act II with his stirring delivery of “This Nearly Was Mine.”

As much as I love A Grand Night for Singing, I must warn that it is best suited to people who are already in love with musical theater, and who have at least passing familiarity with Rodgers and Hammerstein’s massive oeuvre. Luckily, Broadway Rose has no shortage of fans in this demographic; expect lots of full houses throughout the run, with some shows already sold out.

Posted by Westside Theatre Reviews at 8:59 AM