Once Upon a Time at Broadway Rose… 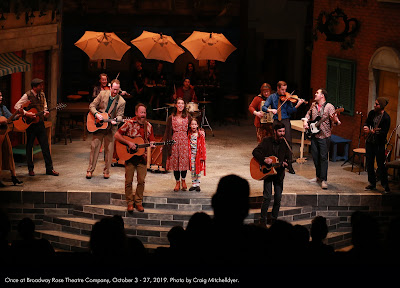 My one and only trip to Dublin (many years ago) was a disaster – I was very pregnant, money was very tight, and it was the dead of winter. This was not a propitious introduction, and I never succumbed to the urge to revisit the Emerald Isle. Courtesy of Broadway Rose’s production of Once, I was finally granted a glimpse into the warm, sometimes raucous, always charming Irish culture of legend, and it was a mind-altering experience. In the hands of Director Isaac Lamb and his team, the Tony winning play (Best Musical) that also won an Academy Award for Best Original Song comes to life with an immediacy that completely envelops the entire audience – the spirit of a traditional ceilidh, but in a contemporary context.

Once is based on a movie by John Carney, with book by Enda Walsh, Music and Lyrics by Glen Hansard and Markéta Irglová. The play tells the story of and Irish musician/songwriter (“Guy”) and a Czech woman (“Girl”) who meet in Dublin as Guy is preparing to give up his quest of a musical career (symbolized graphically when he leaves his guitar abandoned on the street) – he will focus on his trade as a vacuum cleaner repairman. Girl, who is an accomplished pianist, refuses to allow this, insisting that he can win back his lost love (who has moved to New York) and succeed in music. She uses a conveniently broken vacuum cleaner as her entrée into his shop, where she convinces him to continue playing the guitar. Of course they fall in love, but there are barriers to their relationship – and thus goes the story.

Once is somewhat unique among musicals in that the cast is the orchestra; of the 13 cast members, 12 play at least one instrument (the exception is Eva Hudson Leoniak, who plays Girl’s young daughter Ivonka). However, this orchestra seems to be having an amazing amount of fun – and sharing it with the audience, as they are scattered all over the stage singing, dancing, and acting their way through 2+ hours of extraordinary original music interspersed with traditional Irish tunes. Isaac Lamb’s choreography and Eric Nordin’s music direction meld beautifully, and the cast could not be better.

Morgan Hollingswirth (“Guy”) captures the essence of a wounded, guarded, slightly surly character hiding behind a bitter wall to protect himself from further loss – just the kind of damaged goods to attract a determined woman like Girl (Marissa Neitling). Neitling is astonishingly good – her character’s quirky persistence and inability to respect boundaries, combined with a gentle Czech accent and some truly amazing timing, grab the audience from her first appearance and make her both the comic and romantic center of the show.

There are truly no weak links, but a few cast highlights include Jahnava Alyssa (“Reza”), who manages to play the violin while undulating around the stage with stunningly casual sensuality. Guitar players Andrew Maldarelli (“Billy”) and Jay Tatco-Nowak (“Emcee”) inspire much of the audience interaction, drawing us into some rousing Irish sing-alongs.  Kymberli Colbourne’s “Baruska” (Girl’s mother) creates the solidly supportive mother/grandmother who holds the immigrant family together, and watching her on the accordion is way too much fun.

All of this happens on a set that faithfully recreates the atmosphere of a beautifully lit back street Dublin pub, which the audience is free to explore before the show, and to inhabit (via tables and chairs arrayed upstage) during the performance. Jamie Hammon’s costume design (from Reza’s torn tights to Ivonka’s striped pajamas) captures the essence of each character, and the sound design seamlessly copes with the challenge of a horde of musicians/vocalists wandering all over the stage (and occasionally the aisles).

A few years ago, a friend at Broadway Rose expressed to me his concern that the company needed to find a way to attract new audiences, including younger patrons, in order to flourish for another 25 years. The entire run of Once sold out before opening night – and this is not the first time this has happened this year. Clearly, Broadway Rose has found the formula to attract and retain its audience now and in the future – the secret seems to be selecting the right shows, the right directors, and the right casts. If you don’t already have tickets to Once, I can only suggest that you make plans early to welcome the holiday season with It Happened One Christmas.

Posted by Westside Theatre Reviews at 7:21 AM